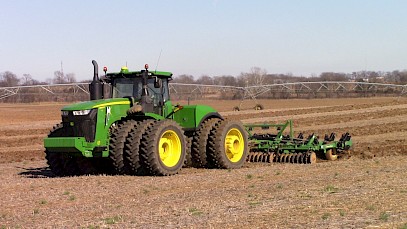 In 1980, the American Farm Bureau Federation, currently the largest agricultural lobbying group and third-largest insurance company in the country, called for the Environmental Protection Agency to be abolished. They’ve sued it regularly ever since. The Farm Bureau lobbied against the Kyoto Protocol, the Clean Power Plan, the Waters of the United States rule, and cap and trade like they were existential threats. Their policy book and local chapters barely concede the existence of anthropogenic warming.

Now, the group is busy portraying itself as an environment and climate advocate. Two weeks after the November election, the Farm Bureau joined the Environmental Defense Fund and others in a new Food and Agriculture Climate Alliance, releasing a slate of “climate policy recommendations.” At the top, “Provide voluntary, incentive-based tools and additional technical assistance for farmers, ranchers and foresters to maximize the sequestration of carbon and the reduction of other greenhouse gas emissions, and increase climate resilience.”

In the past few months, the potential payoff from the Farm Bureau’s new strategy has become clear. Facing an administration eager to rack up climate wins, the Farm Bureau has thrown its weight behind an emerging policy: private markets for carbon offsets, grounded in fraught soil sequestration claims that are quickly being incorporated into corporate “net-zero” pledges.

The agricultural carbon sequestration idea has taken root in the Biden administration. On Monday, Politico reported that the administration now plans to roll out a million-dollar bank plan to help pay farmers to capture carbon sometime this year. But it also reported a telling detail–the Farm Bureau isn’t satisfied with the proposal yet. It wants guarantees that farmers will get paid for soil sequestration without anything else in agricultural business-as-usual changing.

The farm lobby’s climate pivot began in June 2019, in a secret meeting in a sweaty Maryland barn. One hundred groups, Politico’s Helena Bottemiller Evich later reported, were there, including that “longtime, powerful foe of federal action on climate,” the American Farm Bureau Federation. Evich reported that during the secret summit, “the group coalesced around big ideas like the need to pay farmers to use their land to draw down carbon from the atmosphere.”

A video by the U.S. Farmers & Ranchers lobby, posted to YouTube a few months later, tugged at the heartstrings. “They’re superheroes,” says a woman pictured behind a motel desk, watching a fabricated news report about farmers’ incredible power to sequester greenhouse gases and fight climate change. A crestfallen farmer, who has just put up his farm for sale and is headed for the city with his wife and daughter, overhears her and is inspired to return to his farm, despite the economic pressures, to help save the world. “Let’s go home,” he tells his wife, bursting into their motel room.

Like much conservative messaging, the farm lobby starts with a victimization tale and follows with a redemption story that transforms the fallen patriarch into a hero, putting farmers “in the driver’s seat,” “at the table” as “leaders” of “the solution,” the foot soldiers in the great climate battle. These are the threads that make the cloth of Big Ag’s climate flag-waving, along with a quote from George Washington calling farming the “most noble employment of man.”

It’s a powerful narrative—but it’s also false. While small-scale farmers (especially those of color) undoubtedly have it tough, American agriculture—increasingly consolidated and overwhelmingly white at the managerial level—is virtually exempt from fair labor standards, clean air or water regulations, and property taxes. The government shells out tens of billions per year to keep the richest farmers in business.

Farm Bureau talking points say agriculture is only a small part of the climate problem and that it’s getting more efficient, but farming’s most pollutive elements (factory farms) are expanding and emissions are climbing, with CO2 emissions having increased by over 16 percent and methane by over 14 percent since 1990. So-called solutions like turning manure into energy or feeding cows seaweed to reduce their burps mostly aren’t as effective or simple as they sound, and runaway depletion of topsoil and groundwater is carrying farmland headlong into overlapping crises. Regulation—at least a modicum of accountability—is the only way to begin reducing emissions through agriculture.

But thanks to this savvy post-election political pivot by the farm lobby, regulation doesn’t seem to be on the table.

The “carbon bank” the Biden administration is proposing, under the aegis of Agriculture Secretary Tom Vilsack, who also helmed the USDA under Obama, would pay farms directly for the carbon their plants take from the air and root into the soil, with the government taking a leading role in providing verification. It’s actually not a bad idea. “A USDA carbon bank would provide a guaranteed price for producers while guaranteeing the environmental integrity of carbon conservation practices,” read a transition white paper by then-incoming USDA leadership.

If Farm Bureau was committed to farmers and emissions reduction, they’d presumably support this policy wholeheartedly. But they’re already backing away from the proposal. “I’ll admit to you, I’m not totally comfortable yet,” Politico reported President Zippy Duvall saying in a House Agriculture committee meeting on climate change. The Farm Bureau office told me by email that the organization still supports the policy, “provided a few conditions are met.”

The first is that the carbon bank “mitigate potential market impacts.” So they’re on board, so long as farming-as-usual doesn’t change. While they didn’t specify what these impacts on the market might be, it’s certainly possible that if the government pays a decent price for carbon and sets the environmental standards high, farmers might choose to plant for carbon in lieu of commodity crops, and this would cut into the sales of agrochemicals and raise livestock feeding prices for the agribusiness giants Farm Bureau represents. They’re also eager that the system not be “overly complicated or burdensome” and want the bank to “establish a floor price for carbon sequestration.”

If the government becomes a big soil carbon buyer, it could also cut into agriculture’s contribution to private offset markets, which Farm Bureau supports fully. But far from guaranteeing environmental integrity, these private markets are already drawing widespread suspicion. Even Bloomberg’s editorial board, citing the difficulty and impermanence of soil carbon drawdown, warned: “The danger is that a carbon-credit system might instead mainly enable airlines, investment funds, energy firms, agribusinesses and other companies to excuse their own greenhouse-gas emissions by purchasing inexpensive and largely meaningless offsets.” These net-zero plans—which hinge on offsets that only select parties like farm and forest owners can supply—are a new and dangerous delay tactic tantamount to denial in the long term, because they don’t actually result in reduced emissions.

A few weeks after Vilsack touted the carbon bank in his Senate confirmation hearing, the FACA unified to issue a sharp warning: “You cannot do climate on the backs of the American farmer,” said one member in a forum convened by USDA. It’s a remarkable response to a policy that is proposing to give farmers money. But it’s consistent with another condition of Farm Bureau’s support, that it not come at any expense of the billions that USDA already distributes to subsidize insurance, inflate the emissions-heavy meat industry, or compensate for trade wars, the pandemic, and anything else that might come up. The sum in 2019 exceeded the total cost of the 2008 auto industry bailout. This is the bottom line in agricultural lobbying: American government should send more money to farmers—just as long as taxpayers don’t ask them to change the fundamentals of a business that is itself a giant emissions and environmental problem.

“USDA believes they have the legal authority” for the carbon bank, Farm Bureau director of congressional affairs Andrew Walmsley told Politico. “I don’t know if they have the political authority. That’s important.” Coming from a lobbying arm with a history of throwing its weight around and suing government agencies, it’s hard not to read that as a threat. Climate advocates lost control of the narrative, though, the second they welcomed Farm Bureau as a good-faith actor. Until they learn that lesson—and a louder chorus demands accountability in agricultural spending—U.S. agricultural policy and U.S. agriculture itself will continue to hurt the climate, not help it.