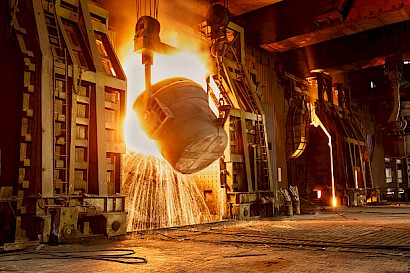 For most of the last century, America was the king of steel. In 1900, the United States was the leading steel producer of the world. By the middle of the 20th century, the United States was producing roughly half of the world’s supply. At the time, the U.S. steel industry employed up to 650,000 workers, with pay significantly above the national average wage. The U.S. dominance of the global steel industry contributed to the allied victory in two world wars. Steel was the symbol of American military strength and economic power.

But by the late 1970s, the steel industry was under assault by rising economic powers. Fueled by low-cost labor and raw materials, government subsidies and investments in new technology, foreign producers rapidly gained market share. Yet, the U.S. government chose not to act on clear-eyed assessments of the need to invest in modernizing the American steel industry, opting for a laissez-faire approach that failed to connect industrial and manufacturing policies to national and economic security. Big Steel resorted to closing facilities and pressing the unions to accept lower wages and benefits, viewing profitability as a zero-sum battle between labor and management.

The result was foreseeable. Employment in the U.S. steel industry fell by more than 60 percent, and the American share of global production dropped even more. The collapse of the steel industry devastated communities across the United States. Generations later, cities like Baltimore and Cleveland have never fully recovered.

Across the world, technology, and capital flows are converging on climate opportunities. These trends will restructure energy, agriculture, transportation, and infrastructure as well as most of the global economy over the next decade. America will not be exempt; the U.S. will either innovate and lead — or buy from other nations that do.

Out-of-touch climate skepticism and fear of public investment will assure our decline in the face of these market forces. Our nation simply cannot fail to seize this moment. We learned our lesson 40 years ago.

To forge the next American century, Congress must enact legislation to implement President Biden’s infrastructure plan. This should not be a partisan issue. The United States increasingly lags in the quality of its infrastructure, and risks falling behind its strategic competitors. The American Society of Civil Engineers recently assessed that failing to address the $2.6 trillion gap in infrastructure funding would cost the United States $10 trillion in economic growth and more than 3 million jobs in the next two decades.

As part of this effort, Congress should grow federal investments in clean energy research, development and demonstration (RD&D) five-fold by 2030 to assure America’s leadership position. The United States spends just .04 percent of GDP on energy RD&D, a mere one-tenth of the peak outlays for the Apollo Program and the Manhattan Project, and about half of what China currently invests.

Such investments will yield breakout returns. Earlier federal investments in energy efficiency and renewable energy delivered more than a 27 percent annual return. Strengthening support for emerging technologies will help assure a pathway to commercialization. For instance, by improving energy efficiency in the manufacturing and the building sectors, U.S. firms can capture new markets and reduce carbon emissions.

Pairing these investments with “demand-pull” strategies, including incentives, federal procurement commitments, and clean energy standards, will ensure that American innovations capture commercial opportunities both at home and abroad.

Critically, these investments should also be integrated with regional economic development strategies and proven workforce development programs, particularly in rural and other underserved communities to create jobs in those parts of the country most affected by this energy transition.

How will we pay for this big vision?

Climate innovation is a long-term investment. Adjusted for inflation, it currently costs the government less to borrow than to hold cash: real interest rates on all but the longest term bonds are negative. This is the moment to make bold commitments that will pay themselves back over time. These investments will unleash broad based economic opportunity, create jobs, accelerate innovation, and expand American trade to new climate markets overseas, all of which will grow the tax base and spur economic growth. Federal dollars will leverage private capital through project financing, equity investment and licensing fees. State and local governments can raise capital with matching federal support using revolving funds and climate impact bonds to build community infrastructure.

America has a bipartisan history of building big infrastructure at a time of national crisis. During the Civil War, Abraham Lincoln connected the nation and secured a century of progress by launching the transcontinental railroad. Franklin D. Roosevelt launched the Works Progress Administration that built the roads, dams, airports and water systems to help America climb out of the Great Depression. Eisenhower championed the interstate highway system during the height of the Cold War to open unprecedented American travel, trade and prosperity in the late 20th Century.

Now is our time. Tackling climate change and renewing our infrastructure is our opportunity. Like Lincoln, Roosevelt and Eisenhower before, President Biden can seize the future by building the infrastructure, innovating the technology, securing energy independence, and unlocking talent and capital for generations to come. Congress just needs to act.