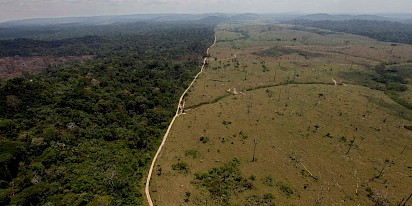 Roberto de Oliveira Alves, a cattle farmer in the Brazilian Amazon, is confident that his pick for president, Jair Bolsonaro, will win the final round of the national election on Oct. 30.

We drink coffee at a wooden table in his open-air kitchen, next to hammocks for sleeping in the Amazonian heat. It’s not even 9 a.m., and it’s already intensely hot.

In the midst of one of the most consequential elections in decades, the fight over land in the vast Amazon is on the ballot. In Rondônia, considered a Wild West state in northwestern Brazil, most people are content with the status quo under Bolsonaro, the incumbent.

Land, carved out of the Amazon, is opening up, allowing farmers and ranchers to expand, and to Alves, it’s a sign of progress — blessed by the president and justified by the country’s need for food and economic growth.

The seemingly endless forest can absorb it, Alves implies.

“Development is in full swing here. Every day, life is getting better and better,” he said. “Bolsonaro will certainly be elected, and then we’ll have another four years to try to reach our goal.”

The land in this part of the country is divided between pasture, large farms and rainforest. But every year, more land is being cleared — cut and burned — leaving only remnants of the forest. Charred tree stumps dot the landscape, as smoke circles on the horizon.

Alves raises 270 head of cattle on his land, which he’s owned for eight years. It was cleared long before Bolsonaro’s term began in 2019, but since then, 73 per cent more land has been deforested, says Marcio Astrini, executive director of the Climate Observatory in Sao Paulo.

Environmental advocates warn if Bolsonaro wins again, more of the Amazon will go.

In the first round of voting on Oct. 2, leftist challenger and former president Luiz Inácio Lula da Silva emerged on top with a narrow lead, but neither secured more than 50 per cent of the vote needed to win outright.

Bolsonaro’s followers already subscribe to the speculation, peddled by their candidate, that anything other than a victory in the runoff vote on Oct. 30 will surely mean the election was corrupt.

The political battle unfolding in Brazil has huge implications for the world’s largest rainforest, which covers an area two-thirds the size of Canada. The forest is critical in regulating the planet’s climate because of the carbon it stores. Scientists say the area is lurching toward a tipping point, where less forest will disrupt a healthy ecosystem and add to an already changing climate.

Deforestation has “increased dramatically in recent years,” said Marcelo Ferronato, a biologist with Ecoporé, an NGO based in Porto Velho, Brazil. “That’s what we’ve been worried about — everyone who works with this and who defends the Amazon.”

Since age 19, he’s been working to preserve the rainforest, earning a PhD in regional development and the environment. He’s a Lula supporter, and dreads the prospect of the upcoming vote going the other way.

“I am very concerned — this is where I live, my work,” he said. “What will the future of this Amazon be like? Every year, there are fires and burns due to deforestation, and the forest is increasingly losing its space.”

Divergent views on the environment

Known widely as the Trump of the Tropics, Bolsonaro has muzzled various arms of the Ministry of the Environment from raising alarm or speaking publicly about the risks of overdevelopment to the Amazon. He’s also cut enforcement agencies’ funding, making it more difficult to patrol the huge Amazon territory, Ferronato says.

Critics say Bolsonaro’s tenure has emboldened grileiros (“land grabbers”) who operate with impunity, scavenging parcels of forest even in conservation areas and on Indigenous lands with little fear of significant punishment.

Early in his presidency, Bolsonaro accused a Brazilian science agency of lying about the numbers showing rapidly rising deforestation.

“With all the devastation you accuse us of doing, and having done in the past, the Amazon would be extinguished already,” Bolsonaro said.

Lula had a mixed record on the Amazon during his presidency, which ended in 2010. But in this election, he’s vowed to end illegal mining and fight against deforestation, saying “Brazil will look after the climate issue like never before.”

“If the world is willing to help, keeping a tree standing in the Amazon may be worth more than any [other] investment,” Lula told international media in Sao Paulo in August.

As we drove through Bom Futuro National Park, Ferronato described the steps of deforestation — how roads are first built by illegal loggers, who harvest the big trees, often taking them out at night.

From there, he says, land grabbers seize their opportunity to further clear the land by setting fire to it. In September alone, Brazil’s National Institute for Space Research spotted more than 42,000 Amazonian fires on satellite imagery.

Ferronato says land grabbers are swift to capitalize on their risk and investment, planting pasture seed in the charred ground, often within days, preparing it for sale to farmers, or claiming the pasture themselves.

“There is no natural fire in the Amazon,” Ferronato explained. “The Amazon is a humid forest. It doesn’t catch fire naturally… The fires here are man-made.”

While they aren’t caused by climate change, like many fires around the world, they are undeniably contributing to it.

The Amazon rainforest stores an estimated 123 billion tonnes of carbon, according to the National Oceanic and Atmospheric Administration, roughly equivalent to four years of global emissions if it were to be released as CO2 — which is what happens when it burns.

The forest’s storage of carbon is the result of millennia of pulling in CO2 for photosynthesis, as the biggest terrestrial carbon sink in the world. But there is evidence parts of the Amazon are now emitting more carbon than they are taking in. That’s why scientists and environmental advocates are sounding the alarm.

Bolsonaro’s record on the Amazon “is the worst possible,” said Stela Herschmann of Brazilian conservation network Climate Observatory. “We have some scenarios that show that the Amazon would not survive another four years of this disastrous government.”

“This is not something that can be decided by any other person abroad… It’s up to us Brazilians to make the best decision for the Amazon.”

Thirteen per cent of Brazil’s land mass is considered Indigenous territory, and nearly all of that is Amazon forest. Given his signaling to use the forest for development, Bolsonaro’s term has been marked by increasingly violent and dangerous conflicts with Brazil’s Indigenous populations, according to Human Rights Watch.

The situation “is catastrophic from the point of view of human rights and environmental rights,” said Laura Vicuña, an Indigenous activist in Porto Velho.

Vicuña has been supporting and advocating for Indigenous populations in their battle to survive and to protect their land. She speaks softly but with powerful conviction while sitting in a peaceful garden gazebo in Porto Velho.

Given the combative nature of the debate over the rainforest, her advocacy work in Rondônia has at times been threatening to those who wish to exploit resources.

“It is very dangerous to be a defender of human and environmental rights,” she said through a translator.

“Even here at my home, we feel this direct pressure, with cars that stop in front of the house, taking pictures and applying psychological pressure.”

Vicuña says she knows her advocacy for the Karipuna people in Rondônia’s threatened forest makes her a target. It’s why when she goes, she takes the longer, safer trip by boat to the remote community.

Yet she insists the “fear doesn’t paralyze me. We have to play our part in the world for the world to be different.”

Deeper in the Amazon to the northwest, a group of scientific researchers are sending out similar alarm signals: the threat to the rainforest is the greatest in decades.

After a two-hour drive from Manaus In Amazonas state, followed by another two hours lurching down a rugged and rain-ravaged dirt road, we come to a series of field research camps in the heart of “pristine” rainforest.

One of them, Camp 41, is fabled. Founded in the late 1970s by legendary American biologist Thomas Lovejoy, the camp was initially set up to research the effects of “fragmentation,” or the process of cutting out parts of the forest for cattle farming.

At that time, newly democratic Brazil had a vision to systematically turn this land into pasture, and scientists wanted to see what it did to the forest that remained. The region did not develop as planned, but the research, known as the Biological Dynamics of Forest Fragments Project (BDFFP), continued under Brazil’s National Institute of Amazonian Research.

The camp remains rugged, with a few open-air structures with tin roofs for sleeping and eating, an outdoor kitchen and a natural pond.

Researchers are studying how elevated levels of carbon in the atmosphere might impact the rainforest, from its roots to the canopy.

As part of Amazon FACE, a bold new extension of this research, 16 giant towers are being erected in a ring inside the forest. High levels of CO2 will be pumped out at the canopy, simulating levels that might occur in 20 years — in effect speeding up the process — and measuring the effect.

“We all know that the CO2 levels have been increasing through time,” said Carlos Alberto Quesada, who co-ordinates atmospheric research at the National Institute of Amazon Research in Manaus.

“We suspect that the areas of the Amazon will become much drier and much hotter in the future. And this probably means that we may even lose the rainforest, independent of men’s action, cutting the trees.”

But there could be other effects of higher CO2, he says. “Are [the trees] going to maybe use this extra CO2 to do better, to use less water, be more resistant? This program tries to understand future trajectories.”

Quesada and his research team hope humanity can stave off a future with a dying rainforest. With plenty of urgency now, young researchers like Anna Moraes are taking up the challenge.

“If Bolsonaro wins, I don’t think there’s a much brighter future for the Amazon forest,” said Moraes, a 30-year-old PhD research scientist who works out of Camp 41.

But Brazilians voting at the end of the month are seized with economic issues: high inflation, low growth, crippling poverty and still-alarming levels of crime.

The Amazon, which is mythical in people’s minds, should be protected, many voters told us. But economic growth puts food on the table, and the land-use balance remains contested.

“We need everyone to stand and try to protect [the rainforest], but it has to be done now,” said Moraes, who will ultimately inherit the consequences of Brazil’s pressing choices this election. “Otherwise, this very delicate system is going to start to crumble.”