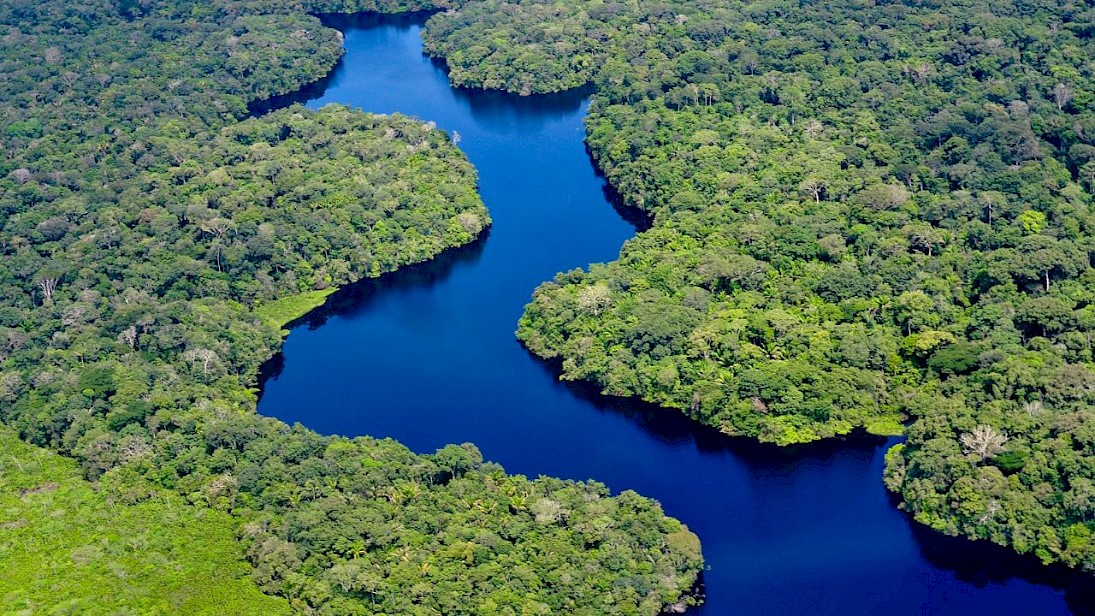 First the road was cragged and cracked. Then it was a thick slop of mud. Then a swirl of red dust. But now, after we had traveled hundreds of miles through the densest of jungle, the highway was finally good — paved and smooth — and it was here that the driver stopped the truck.

There was an unmarked dirt road branching off from the highway. It cut into the jungle and led out of sight. Lucas Ferrante, the environmental scientist leading this journey, wanted to go down the road and see what — and who — was hidden behind the trees.

“This is illegal deforestation,” he said.

The driver, who lives on the highway, told him it would be too dangerous to proceed. These rough-hewn side roads are often the work of armed criminal groups. The groups, which dominate this stretch of the forest, had unleashed a wave of fire and destruction that was transforming much of southern Amazonas state into smoldering pastureland. The way they solve problems is with violence. People disappear. Their bodies are never found. Our driver feared the trouble that following this road would bring. 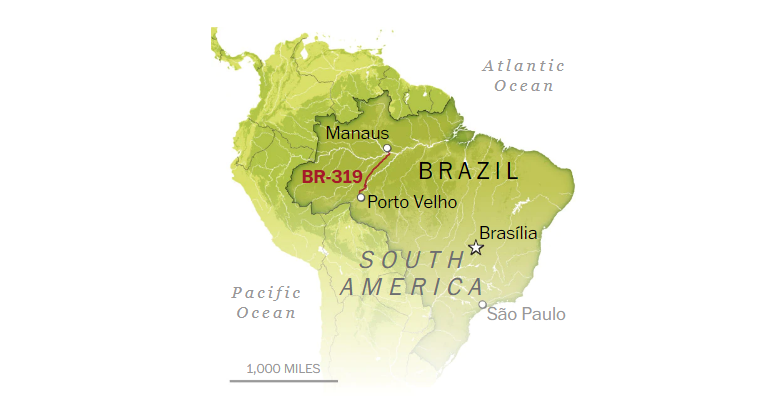 Ferrante, who has spent years detailing the region’s lawlessness in academic journals, understood the highway’s dangers and uncertainties better than most. He had been threatened in anonymous calls and messages — then abducted in November 2020 and told to keep quiet.

Another researcher documenting the destruction received this text: “You’re going to burn in the fire. It will be a barbecue. Message delivered.”

But Ferrante, 33, believed traveling here was worth the risk. He had come to see this highway, a reddish gash scarring a quilt of green, as one of the Amazon’s last stands. A photographer and I had now joined him on this journey to its further reaches.

BR-319 begins along the banks of the Amazon River and runs more than 500 miles, slicing through the largely preserved core of the Brazilian Amazon to connect the cities of Manaus and Porto Velho.

Scientists argue that the only thing protecting this reserve — one of the region’s last bastions of contiguous forest — is the profound deterioration of the road itself.

Its decay has for years left much of it impassable, repelling criminal land grabbers and helping to preserve an area scientists say is vital to the survival of the entire forest.

But that protective barrier is now being paved over.

Stretches of the highway have been improved in recent years, making travel easier and unleashing a surge of deforestation. Many in the rainforest want the government to complete the job. President Jair Bolsonaro, who has worked to ease and undermine environmental regulations to promote development, says paving the highway would fulfill “a wish of the Amazonian people.” His vice president, a general in reserve, said he’d eat his own military beret if current officials don’t get it done.

For many in Manaus, a city of 2.2 million cut off from Brazil’s main highway system, the road symbolizes something close to freedom — a lifeline that connects them to the rest of the country and paves the path toward development.

“BR-319: It’s our right,” says the slogan plastered across social media and highway signs. In a region of both vast resources and pervasive poverty, many say the time has come to use what’s there for the taking, to seize the better life long denied by isolation and geography, to push back against federal laws and environmentalists who seem to care far more for trees than people.

The outcome of the emotional political clash, scientists say, has implications not only for the rest of the forest but the world. The Amazon is a crucial bulwark against global warming, helping to slow the inexorable march of climate change. But researchers warn that finishing the highway and subsequent state roads would open up its core to destruction. Scientists at the Federal University of Minas Gerais found in 2020 that paving the highway would quadruple deforestation here over the next three decades.

“That would be the end of the forest,” said Carlos Nobre, a climate scientist who focuses on the Amazon.

The Amazon is already believed to be at the precipice. If much more is lost, scientists warn, the forest could suffer destabilizing ecological changes that convert immense swaths into degraded open savanna. What has historically been a carbon sink could suddenly become a “carbon bomb,” upending the world’s efforts to avert catastrophic warming. Already, some regions of the Amazon are exploding — emitting more carbon gas than they absorb. The shift has been particularly acute in the most deforested sections of the Amazon’s degraded southeast, where in the past 40 years the average temperature during the annual dry season has risen more than 4 degrees.

But the wave is now moving deeper into the forest. The two cities in Brazil that produce the most carbon gases — São Félix do Xingu and Altamira — are far from the most populous. They’re both in the Amazon, near large infrastructure projects that have brought development, but also deforestation and extreme violence.

Along this stretch of BR-319, where the destructive process is well underway, the killings have already begun.

Humaitá, the town closest to our position, recorded 15 homicides in October alone — five times the monthly average. Police said most were connected to rising land-grabbing and deforestation. On one cattle farm built on cleared land, several workers had recently disappeared. First went a farm worker named Jeferson Bungenstab, 37. Then followed one of the last men to see him alive, a housekeeper named Nelson Antônio da Conceição, 33. Police didn’t yet know what had happened to the men, but had begun to suspect the worst.

Ferrante, unaware of the rash of killings and disappearances, peered down the road. He had made up his mind. He told the driver to pull out onto it. The photographer, Raphael Alves, and I looked at each other. I felt a wave of nerves. Alves got his camera ready. The truck started forward.

“We’re entering an area of great risk,” warned the driver, who asked not to be named out of concern for his safety.

Heading down the path and into the forest, we didn’t yet know how much.

In the late 1960s, several years into Brazil’s two decades of military rule, a small group of generals started drawing lines on the map. They were strategizing the greatest military excursion in Brazilian history: the conquest of the Amazon. They charted out a blitzkrieg of highway projects to tame and integrate the rainforest into the larger country. The Trans-Amazonian Highway cut across the Amazon’s belly. Another road cleaved massive Pará state. A third highway lassoed Venezuela to the Brazilian Amazon.

The new roads fueled surges in both migration and deforestation. In a region where people have long seized land and tried to establish ownership by occupying it, the highways filled with travelers — poor migrants, land speculators, ranchers — chasing fortune and opportunity. Many ended up along the Amazon’s southern sweep, a bow-shaped area that now concentrates 75 percent of the forest’s losses and has come to be known as the “arc of deforestation.”

Years of analyses illustrate how roads often lead to deforestation. It’s called the fishbone pattern. The highway forms the spine. Then speculators, illegal loggers and local officials build roads radiating outward: the ribs. Studies have shown that the vast majority of deforestation in the Amazon has occurred within 30 miles of a major road.

BR-319 was different. It was constructed in the 1970s, like the others, but attracted far less notice. Merchants in Manaus found cheaper methods to transport goods. Migrants went to other parts of the forest. The highway — built hastily during the rainy season and battered annually since then with an average rainfall of 87 inches — fell into disrepair and became impassable for much of the year. In 1988, it was effectively shut down, sealing off both the core of the Amazon and also Manaus, where a divisive debate over its future has seesawed ever since.

Transportation and environmental authorities in 2007 approved the restoration of portions of the highway, but not its vast middle. Then they authorized the rudimentary “maintenance” of the highway’s decayed midsection — but not paving it. Local politicians promised before the 2018 elections to finish the whole thing. Environmentalists countered that it made no economic sense: Studies showed it was cheaper to transport goods along river routes.

Then, last year, a new coronavirus variant crushed the city, depleting its oxygen supplies. The road’s supporters seethed: If the highway had been passable, oxygen would have arrived in time. Instead, dozens suffocated to death.

The raw nerves surrounding the issue have been exposed at boisterous public hearings.

At one September session in Manaus, an American scientist read a lengthy prepared statement. “The BR-319 highway is economically unviable,” said Philip Fearnside, who contributed to the work of the Intergovernmental Panel on Climate Change, which won the Nobel Peace Prize in 2007 for climate research. He called Brazil’s decision-making process “deficient.” And the environmental consequences if the highway were paved? “Catastrophic.”

The highway’s supporters in the audience started to boo. Fearnside yelled over them in his heavily accented Portuguese. Then his mic was cut. Video shows the next speaker striding to the front.

“Why would someone from the United States come here for this?” demanded Sérgio Kruke, director of the Conservative Amazonas Movement, pointing at Fearnside. “How could that be?”

The audience clapped and cheered. Kruke shouted into the microphone.

“This house is ours! If we want to knock down all of the trees, we’ll knock them down!”