On April 17, 1793, three French soldiers broke into the tomb of Michel de Nostredame, a man we know as Nostradamus.

Legend has it that one man, a Corporal Adelaide, picked up the skull in an attempt to gain the power of the long dead seer.

His fellow soldiers bore witness that his eyes opened wide as he gained full knowledge, then was immediately struck down and killed by an errant bullet, fired from the nearby riots.

A plaque around the neck of the corpse read 1793.

It is by channeling the ghost of Nostrodamus — as if drinking blood from the very skull itself — that I give you my Black Swans for 2011.

For those of you who don’t know, Black Swans are unpredictable events that destroy prediction models.

After 20 years in the derivatives industry, Nassim Taleb created the Black Swan Theory to explain:

In other words, you can’t create a mathematical certainty in the market. Long Term Capital Management taught us that.

Computer models and base probabilities on bell curves… Yet it’s the three percent on either end that makes all their algorithms fail.

And by the very nature of statistics, an event that’s 1% likely to happen will happen — if you wait long enough.

Today I bring you ten events that could be that unpredictable, disruptive long shot for 2012.

Construction is 60-plus percent of GDP, compared to exports of 5 percent… The problem is that consumption as a percentage of Chinese economy has declined in the last 10 years, from 40 to 35 percent. It’s all real estate…When construction is 60 percent of your economy, and you are building lots of things that people don’t need, the state may let this get out of control… It’s hard to manage this type of bubble.

China Business Insider estimates there are 64 million vacant homes in China. If the Chinese real estate bubble pops, commodities such as copper, iron, and moly will crater.

This overwhelms the EU’s 440 Euro bail-out fund and sends U.S. Treasury yields into the negative as investors flee to safety.

Furthermore, you should expect an additional twenty percent increase in U.S. natural gas production through 2035 than was predicted last year.

The national leadership won’t take advantage of the opportunity to end our dependency on imported oil due to the combined lobbies of big petroleum and green energy.

In any event, natural gas storage facilities and pipelines will continue to grow until there is a global network of ports and facilities to transport natural gas in much the same way we transport oil. Right now, natural gas is around $4 in Texas but $12 in Japan. Obviously, there are opportunities here.

If you took my advice last year and bought CBI (a company that makes natural gas infrastructure) you’d have doubled your money: 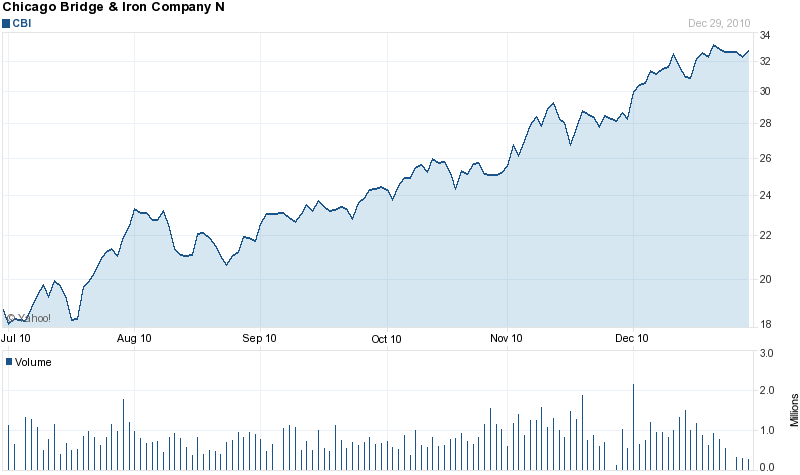 Last year, I predicted uranium would surge to $90 a pound.

That didn’t happen. Instead, it went from $40 to $65. I predict uranium in the $90s again based on the continued building of nuclear plants around the world.

If you’d listened to my prediction last year and bought uranium miners, you’d have doubled your money: 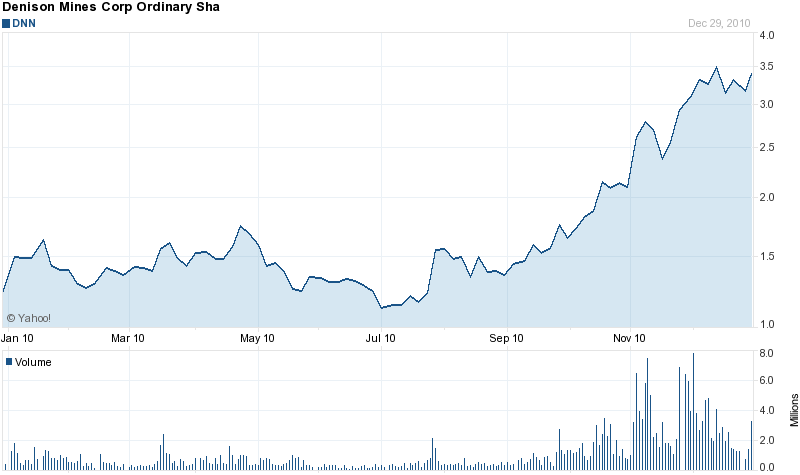 China links its currency to the dollar. The dollar is in a state of decline as a policy move to inflate away U.S. debt.

This means that everything in China is going up in price. The official rate in China is 5.1% for November — but food inflation is running at 11.7%. The last time food prices jumped in 2007, there were riots at supermarkets.

According to a survey by the Chicago Federal Reserve Bank: “Farmland in Iowa increased in value by 13 percent between the fall of 2009 and fall 2010. Our survey for Indiana shows that farmland values since 1985 have gone up about 270 percent, or 5.5% per year.”

Farmland prices are increasing at more than twice the historical average. This will continue, despite the fact that all other real estate prices are falling, and create a bubble. Farmers will overextend themselves, crop prices will fall, and we’ll have a raft of farm foreclosures.

Willie Nelson and John Cougar will go on tour for Farm Aid VII. The national leadership will continue to squeeze food prices through subsidies for ethanol… After all, you can’t be president without a strong showing in the Iowa caucus.

Volatility is down to pre-crisis levels. Bernanke has set a paperweight on his laptop number pad. It is adding zeros to the national debt as fast as his Lenovo will allow.

Last year I wrote: “No one is talking about an extended bull market… The money that is currently being produced by the Treasury and hoarded by the banks could flow to equities and launch another bubble.”

Judging by how few bargains there are out there, I’d say that the market has gotten ahead of itself. The Bernank will continue with its flood of cash, but expect a lot of mixed signals and volatility…

The last time we emerged from a recession based on liquidity was in 2004. Here’s what 2004 looked like: 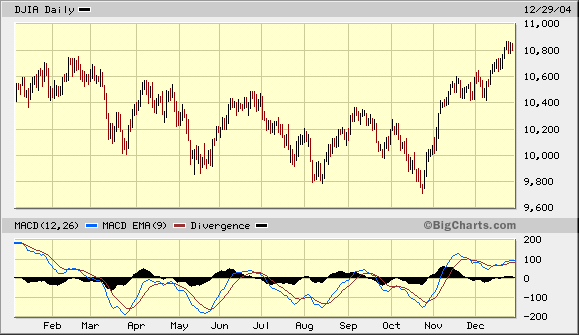 8. The Year of the Electric Car

Look for EVs to sell out this year. The Nissan LEAF, the Chevy Volt, and the Fisker Karma will hit the ground rolling, giving early adopters all sorts of smug happiness.

Charging stations are springing up in downtowns everywhere. You will be able to buy them at Best Buy. The Geek Squad will hook them up in your garage.

Old companies like Intel (NASDAQ: INTC) (which had its best year ever), Cisco (NASDAQ: CSCO), IBM (NYSE: IBM) and Corning (NYSE: GLW) will break out of their ten-year sideways range based on the revival of business spending. These companies are all trading at small P/E ratios and sitting on large amounts of cash… Intel has $20 billion; Cisco has $38 billion.

The State Department continues to spurn all advancements. Leaders in both parties do nothing because you can’t be president without Florida, and you can’t win Florida without the Cuban vote.

Have a great New Year,