Surprise step to curb wildfires: To save trees, build a sawmill 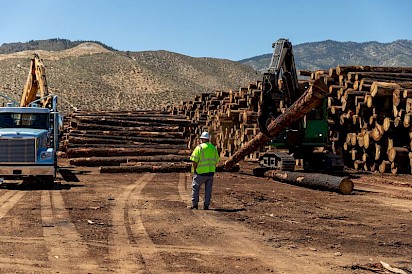 As California braces for another potentially devastating wildfire season, state officials and some environmental advocates are finding hope for forests in an unexpected place: a new sawmill under construction near Lake Tahoe.

Tahoe Forest Products, LLC broke ground last month on a $10 million sawmill in Carson City, Nevada, which sits just across the California border on the eastern side of Lake Tahoe. It will be the first sawmill of its size to be built in the area in nearly a century, according to project leaders. Many scientists say forest-thinning projects are urgently needed in the face of climate change, and the new mill’s supporters believe it will make a major impact in managing wildfires in a heavily wooded region that was threatened just last year by a massive blaze.

“My jaw dropped when I heard the news,” said Forest Schafer, director of the Natural Resources Division at the California Tahoe Conservancy, a state agency. “It’s really rare to see a success like this that will make a real difference in Lake Tahoe overall.”

A century of fire suppression policies have left forests overgrown with smaller trees. While wildfire is part of the natural ecosystem, rising temperatures and worsening drought are leading to explosive blazes that decimate forests. Part of the answer, according to many ecologists and restoration experts, is to ramp up the removal of younger trees from the understory, while simultaneously introducing prescribed fire and trying new planting strategies.

Yet sawmills — the places where loggers take those logs — are few and far between in California. Economic recessions and the consolidation of the industry into larger, high-volume mills have played a role, and timber harvesting has declined. Multiple factors are behind that trend, including federal protections for endangered species, which restricted logging on public lands. In the Lake Tahoe area, the closest destination is more than 100 miles away, according to Amy Berry, the CEO of the Tahoe Fund, a philanthropy that supports environmental projects.

The silencing of chainsaws was the sound of victory for environmental activists and forest ecologists, even a few years ago. And no one wants to see the type of clear-cutting that destroyed old-growth forests for much of the 20th century. But now scientific consensus is shifting towards acceptance — and even encouragement — of a certain amount of logging.

“There’s just such abundant evidence that if we do nothing, we’re going to lose it all,” said John Battles, a professor of forest ecology at the University of California at Berkeley. “The forests will suffer such severe losses that we’re no longer protecting the species. We’re putting them at risk.”

Leaders at Tahoe Forest Products envision a facility that processes roughly 40-50 million board feet of lumber per year — a modest operation compared to many other mills around the US. The Carson City operation will start processing logs in early 2023, said Jon Shinn, the CEO. It will produce construction lumber, fence posts and other products to sell to West Coast distributors.

Most of the wood will initially be taken from trees that were killed in the massive Caldor fire that blazed through 221,000 acres in the Tahoe area in 2021.

After that supply is finished, the mill will mainly process the smaller-diameter trees that experts say are overloading California forests, fueling the kinds of wildfires that leave landscapes obliterated. If nothing changes, those fires may pose a risk to the longevity of all sawmills, Shinn said.

“I worry that one of the insecurities of this venture is that there will be so much fire in the Sierra Nevada that the growing stock will decline to where we aren’t growing that much anymore,” he said.

The Tahoe Fund helped convene the sawmill project leaders, which include Shinn and Kevin Leary, the CEO of a Reno-based private investment firm, Hallador Investment Advisors. In 2021, it commissioned a study that examined how much supply would be available for a sawmill operation in the region. It cited recent funding and planning by the state of California and the US Forest Service to increase fuel reduction treatments such as thinning as well as prescribed fire. That support should help keep the supply of logs for the sawmill flowing, with the oversight of environmental regulators, said Berry of the Tahoe Fund.

“Everyone has a role to play here,” she said.

The Carson City mill will be built on land owned by the Washoe Tribe of Nevada and California. Wendy Loomis, the executive director of the tribe’s business arm, said the project will aim to hire tribal members for jobs that will be available in the sawmill.

“When we look for projects, our first priority is to support the Tribe’s vision and mission statement to help Mother Earth,” Loomis said. “Number two is to create workforce development. So this accomplishes both of those things.”

Several environmental groups and restoration experts offered cautious support for the types of thinning projects that the new sawmill is supposed to help. A spokesperson for the Nature Conservancy, the largest environmental nonprofit in the US, said that while it did not specifically endorse the Carson City project, “we can envision a future where a small-diameter sawmill, properly sited and sized, could help scale forest restoration efforts.” The Sierra Nevada Alliance, an environmental nonprofit based in the Tahoe area, similarly advocates for healthy forest restoration.

Last year’s Caldor fire provided some evidence that thinning and prescribed fire — which was developed and practiced by Indigenous people for millennia — are beneficial for forests. In areas that had been treated, flames dropped down enough to leave patches of forest still green and alive, officials said at the time.

Not everyone is in favor of the Carson City plan. Some residents have registered concerns with elected officials about noise impacts related to the mill. And there are some scientists and activists who oppose all forms of logging, arguing that forest thinning is a smokescreen for the economic interests of timber companies. A lawsuit impacting a restoration-focused logging plan in Yosemite National Park reflects that ongoing tension.

Battles, the Berkeley scientist, said those voices are in the scientific minority. And the Carson City sawmill isn’t the only project of its kind. Further north, in Quincy, California, another sawmill is being built to tackle the acres of dead trees killed by last year’s Dixie fire.

“We need to do more forest management, whatever it is,” he said. “But we need the capacity for it, and one way to get that is to sell the wood and make sawmills that can handle it.”