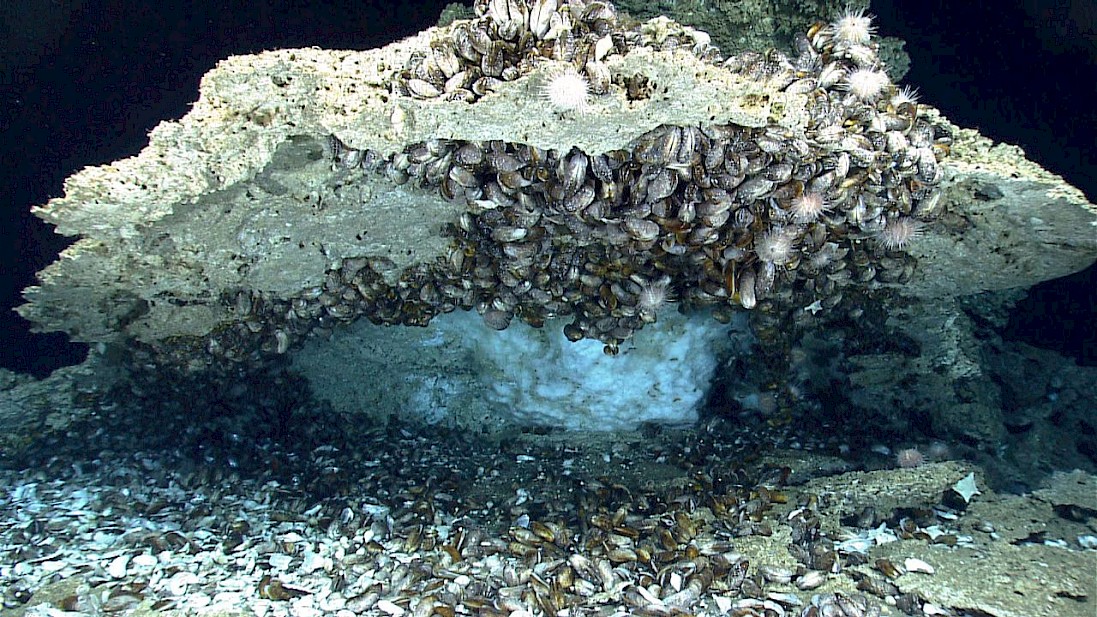 A group of scientists this week said they have discovered new evidence of how methane deposits stored deep in the seafloor can break free — and they are now trying to figure out what this could mean for our climate future.

The research published Monday suggests a major destabilization of seafloor methane off the coast of Africa around 125,000 years ago, after a global shift in currents warmed the middle depths of the ocean there by 6.8 degrees Celsius, or 12.2 degrees Fahrenheit — a massive rise.

Several scientists who reviewed the study said they weren’t ready to raise major alarms about the planet’s ample stores of subsea methane in the form of what are called hydrates. While most experts agree that this methane could cause tremendous warming if it somehow hits the atmosphere, many say that the gas would be unleashed only slowly as the planet warms, and that the ocean itself would protect us by absorbing most methane before it can escape to the air.

Still, the new findings, published in the Proceedings of the National Academy of Sciences, underscore how little we still know about how the planet will respond to our uncontrolled greenhouse gas emissions — and how unpredictable that response may be.

The new sample of sediment unearthed from the seafloor paints a picture of tumultuous events during a period of Earth’s history around 125,000 years ago, called the Eemian. The era has often stirred scientists’ fears about the future, for while the Earth was not much warmer than it is today, seas were 20 feet or more higher. Some suspect the West Antarctic ice sheet may have collapsed at that time — and a few have even postulated superstorms powerful enough to lift boulders atop cliffs in the Bahamas.

The new research suggests another Eemian climate cascade. It would have begun with large pulses of meltwater from the Greenland ice sheet, which slowed down the circulation of the North Atlantic Ocean — a change that would have reverberated around the globe. As the ocean’s so-called conveyor belt slowed and less cold water made its way into its middle depths, the paper’s authors contend, the continental shelf of the Gulf of Guinea along the coast of Africa was bathed in sudden, strong warmth. This, in turn, destabilized methane that had previously been suspended beneath the seafloor.

The warming of the middle layer of the ocean during the era was “much stronger than previous model studies have assumed,” said Syee Weldeab, a paleoclimatologist at the University of California at Santa Barbara, who led the research along with colleagues at institutions in Germany, China and Australia.

“And then, the release of methane is strong and persistent over a longer time, to make it basically noticeable through the sediment, through the water column, and potentially, to the atmosphere,” Weldeab added.

Methane is more than 80 times more potent than carbon dioxide for the first 20 years after it is released into the atmosphere. And current emissions of methane from fossil fuel leakage, cattle and landfills, among other sources, are driving a major part of the Earth’s warming.

But there are also enormous quantities of natural methane locked away in the form of hydrates, buried in the mud of the Earth’s continental shelves. The U.S. Geological Survey estimates that, at the low end, the amount of methane contained in hydrates around the globe is “more than 4000 times the amount of natural gas consumed in the USA in 2010.” Scientists and policymakers have begun eyeing hydrates not only because of climate change concerns, but also because they might be tapped as an energy source.

Hydrates form over long geological periods, largely the result of tiny marine organisms powering their bodies in the absence of oxygen and releasing methane as a byproduct. The methane fuses with water and forms icy deposits, which remain stable as long as there is enough pressure on them from the weight of the water above — and as long as the temperature remains cool enough.

But how can we possibly know what these hydrates did 125,000 years ago?

The new study is based on the evidence contained within a core of ocean sediment measuring more than 100 feet long that was extracted in the Gulf of Guinea, off the coast of Cameroon. Going deeper into the seafloor mud is the equivalent of going back in time, and scientists can use the shells of tiny organisms that died in those ancient waters and sediment — “microfossils,” Weldeab calls them — to infer the state of the environment in different eras.

Those shells contain evidence of the major ocean-warming event. They also show a strong increase in the prevalence of a certain variant of carbon, called an isotope, that these small organisms were busily molding into their shells. That anomaly, as Weldeab and colleagues interpret it, signals an environment full of methane.

But because the study could not directly measure ancient methane, the scientists are inferring its presence based on this “proxy” evidence — Weldeab’s specialty. Still, it all comes down to how you interpret the pattern of carbon atoms contained in shells buried in ancient mud.

Experts had mixed views of the research — and its implications.

“Carbon isotopes are tricky, there are hundreds of stories told about carbon isotope excursions, and some excursions which no one can even come up with explanations for,” said David Archer, a geoscientist at the University of Chicago who has written in the past that hydrates will probably emit some methane this century but it will not be “catastrophic.”

“Conclusions from data like this are always provisional, [and] become stronger if they are confirmed in multiple proxies,” Archer said.

Carolyn Ruppel, chief scientist of the Gas Hydrates Project at the U.S. Geological Survey, called the new work “a very provocative study” and praised it for containing “very elegant data.”

“This may have truly happened in this place at this time because of weakening of AMOC,” Ruppel said, referring to the Atlantic Meridional Overturning Circulation, a highly sensitive part of the global ocean circulation system.

But “I don’t think that on average, it changes our perspective,” Ruppel continued.

For instance, Ruppel said, scientists believe that some small fraction of the world’s subsea methane hydrates are already breaking down today, in response to the relatively modest ocean warming that we have seen so far. But “very little of that methane is reaching the sea-air interface,” Ruppel added.

Wei-Li Hong, a geochemist at Stockholm University, agreed and said the microfossil and isotope evidence is difficult to interpret. For instance, he said, the speed of the ocean’s currents can influence how much methane can accumulate in a particular spot for these tiny organisms to, in turn, incorporate it.

“Being a scientist, I think I should be open-minded,” Hong said. “I think everything is possible because I think that the problem with this debate is that no one is able to give definite evidence for one interpretation over the other.”

Even if these hydrates do come apart, the methane might not enter the atmosphere because of the protective layer of the ocean. The gas would still have to travel upward through waters half a mile or more deep. There are reasons to think that some or all of it may fuse with oxygen within the water column and lose its warming potency.

But Weldeab suggests that, at least 125,000 years ago, much of the methane could have escaped — in part because there was just so much of it.

“We find evidence there is methane release across the water column,” Weldeab said. “Starting from 1,300 meters, going up to the surface.”

Another key question is whether the methane breakdowns would have happened only in the Gulf of Guinea or whether they occurred all over the Earth.

“We and our colleagues should go out and see this in other areas to determine whether this was a local or more global event,” Weldeab said.

In the end, the study presents worrying evidence, but also leaves many unresolved questions. And the chain of causes that it posits — Greenland melts, oceans shift, newfound heat reaches the African coast thousands of miles away, and suddenly methane is mobile — may not play out in the same way today, even if it did all happen that way in the past. The Eemian is only an analogue — one of the closest we have for where we are now heading, but still imperfect.

Still, the newest theory about how the climate dominoes may fall underscores what the late Columbia University geoscientist Wallace Broecker famously observed as he studied the global ocean currents’ response to burning fossil fuels: “The climate system is an angry beast and we are poking it with sticks.”