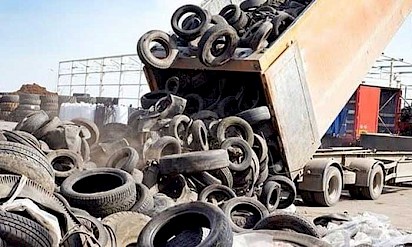 AP News reports that a new law passed by the South Carolina General Assembly allows for steep fines and even jail time for tire recyclers who fail to follow state regulations. According to the newspaper, the proposal signed into law this month by Governor Henry McMaster allows a fine of up to $10,000 per day for a first violation of the rules and $25,000 a day for any additional violations.

A judge can also sentence offenders to up to a year in jail, according to The Post and Courier of Charleston, whose reporting on the issue was cited by lawmakers pushing for the proposal. The law also lets health and environmental officials stop a recycler from bringing in any more tires as soon as they go over their permitted capacity. Before, the businesses could sue over the Department of Health and Environment Control’s order, allowing it to keep operating for months until the case was resolved.

The newspaper pinpoints that tire recyclers who go over capacity get seven days to reduce the number of tires to allowed levels. If they fail, DHEC can keep their operating license suspended until they are under 80% capacity. The new law “will stop the bad actors in the business well before 1 million tires accumulate, as well as the associated fines and fees,” Rep. Sylleste Davis said.

The Moncks Corner Republican had a plant called Viva Recycling in her district in Berkeley County, which may have abandoned up to a million tires it intended to recycle. The owner just left and South Carolina paid more than $3 million to clean up the site, which was a health hazard full of mosquitoes breeding in stagnant water and had the potential to be a bigger disaster if the tires caught fire, which happened at a second Viva Recycling plant in Anderson.

The state is spending $2 million to clean up those abandoned tires. Viva Recycling was fined $1.7 million by DHEC for violating regulations for its South Carolina locations. It has not paid those fines.