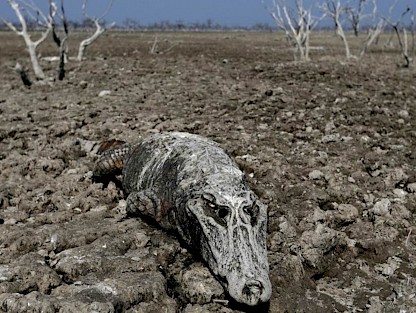 It’s a familiar story: A vast forest in South America loses huge swathes of trees each year, threatening the communities living there, destroying rare habitats and exacerbating the effects of climate change on the region.

But this woodland is not Brazil’s Amazon - it is the Gran Chaco, the continent’s second-largest forest, where environmentalists say massive tree loss is being overlooked as the world focuses on the more famous “lungs of the planet”.

Spanning about 1 million sq km (386,000 sq miles) mainly in Argentina, with the rest in Paraguay and Bolivia, the forest is being devastated by logging and expanding soybean farming, green groups say, as they call for stronger enforcement of Argentina’s forest law.

Last month, the environmental campaign group made new arguments in a court case it had launched in July 2019 on behalf of the South American jaguar, whose population in the Gran Chaco has dwindled to only 20.

The group told Argentina’s supreme court there is evidence of “systemic violation” of the country’s forest law, which restricts tree clearing to only specific parts of the forest.

In yellow zones, land can be used for sustainable activities, while green areas can be totally or partially cleared for agricultural or other uses.

The Greenpeace complaint says that even after a judge suspended logging in jaguar habitats in November 2020, more than 7,800 hectares (19,300 acres) of those forests disappeared between then and April 2021.

Emanuel Carrocino, director of the forestry department for Chaco province, said there is sanctioned logging being carried out in the province, but only in areas allowed by law.

“If the soil does not have agricultural potential, logging is not allowed,” he said over the phone.

“The problem is illegal clearing,” he added.

Carrocino said stopping such encroachment “is not easy” because much of the forest is on private property and investigating a report of illegal logging first requires a search warrant.

That can take some time, by which point the encroachers have moved on, he said.

Enforcement is also an issue, he added. When illegal loggers are caught, they are fined and legally obliged to restore the trees that have been cut down.

The second step, “we are not achieving,” Carrocino said, without providing more details.

A study by Argentina’s environment ministry published last year reported that more than 85% of the native forest lost in the country between 2007 and 2018 was in the Gran Chaco region.

The region is home to a wide range of animal and plant species - including the giant anteater as well as the jaguar - and about 4 million people from 30 different ethnic groups, according to estimates by environmental groups.

Daniel Liberatti raises cattle near the town of Villa Bermejito, in the north of Chaco province, and serves as president of the National Peasant Front, which brings together small agricultural producers, artisanal fishermen and indigenous communities.

“If (loggers) continue to devastate the forest, we will run out of the fruits that our animals eat and that will increase poverty terribly,” he said.

Ten years ago there were 450 families from various indigenous communities living near Villa Bermejito, he said - but today, there are fewer than 100 families left.

Their only hope, the farmer said, is stronger enforcement of conservation policies.

“We fight so that they do not take away the forest that is left, but they are pushing us into the abyss,” he said.

Because of surging global demand for soybeans, Gran Chaco forest land is now worth four times more cleared for agriculture than in its natural state, according to the environment ministry study.

“Soybean (farming) can yield for a producer but deprives society of a carbon reservoir and the forest’s ability to be a water regulator in droughts and floods,” the study said.

The Gran Chaco, much of it dry forest, receives very little rain, and when vegetation that absorbs and stores rainwater is removed the moisture runs off, increasing flood risks and carrying away soil nutrients, said Manuel Jaramillo, executive director of the Argentine Wildlife Foundation.

His foundation estimates that if forest loss in the Gran Chaco continues at its current rate, another 4 million hectares will be gone by 2028 - an area about 200 times the size of Buenos Aires.

But if Argentina’s forest law is properly applied, the group says, that loss would be halved, along with climate-changing emissions from forest loss in the region.

More than 110 non-governmental groups, led by the Argentine Wildlife Foundation, in 2019 set out a strategy to stop destruction of the forest over the next decade.

It calls for authorities to create an environmental prosecutor’s office, offer incentives for forest preservation, and develop alternative incomes to curb illegal logging, such as local-led tourism, among other measures.

The government’s National Forest Directorate did not respond to several requests for comment.

Liberatti, the cattle farmer, said he would like to see the state give long-standing communities there land titles so he and other farmers could better protect the trees while making a sustainable livelihood from the forest’s resources.

“All of that can be done because the legal framework is in place,” he said. “But the political will to do so is lacking.”