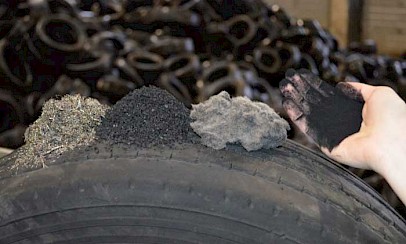 Recycling Magazine – a German online publishing highlighting market updates and technology advances in recycling industries, including tire recycling – tells about fruitful results of Portugal-based NextLap program in the field of tire recycling. As part of the NextLap program managed by the collaborative innovation consultancy Beta-i and promoted by the Portuguese management entity Valorpneu and the Danish tire recycler Genan, nine companies associated with the sector’s value chain and five entrepreneurs have started to develop six projects focused on giving a second life to materials derived from the recycling of end-of-life tires and promoting a more circular market.

The magazine says that the French sports retail company Decathlon together with its innovation partners Rubberlink and Tintex, initiated two of these pilot projects, which consist of prototype footwear made from recycled end-of-life tires.

The Recycling Magazine writes that “NextLap is a program in which Beta-i applies its collaborative methodology, oriented to the development of pilots and new projects between companies, startups, and other innovation partners, to accelerate the transformation of business models, products, and services. Besides Valorpneu, Genan, Decathlon Portugal, and Infraestruturas de Portugal, construction companies like Grupo Opway and Pragosa, automotive cluster MOBINOV, recycling company Extruplás, footwear company Procalçado, and sportswear brand Houdini, are also involved in the program.”

The innovators at Rubberlink created a solution of devulcanized tire rubber that allowed Decathlon Portugal to produce a prototype shoe with a 100 per cent recycled rubber sole. According to data from Genan, in comparison with the use of virgin raw materials to produce similar products, for each ton of tire that is recycled, less than 700 kg of carbon emissions are produced.

In addition, Tintex, using material from Genan have managed to reuse crumb rubber from end-of-life tires to create the upper part of gym shoes that will also be tested by the largest retailer of sporting goods in the country.

According to the magazine, Tintex was also responsible for the development of a solution to take advantage of the textile derived from the tire, which will allow the reuse of a material that has few economic applications and, compared to standard raw materials made with leather, reduce the total consumption of energy and water in its production.