Six New Events that will Drive Oil to $130 by March

Check out this chart for light, sweet crude. 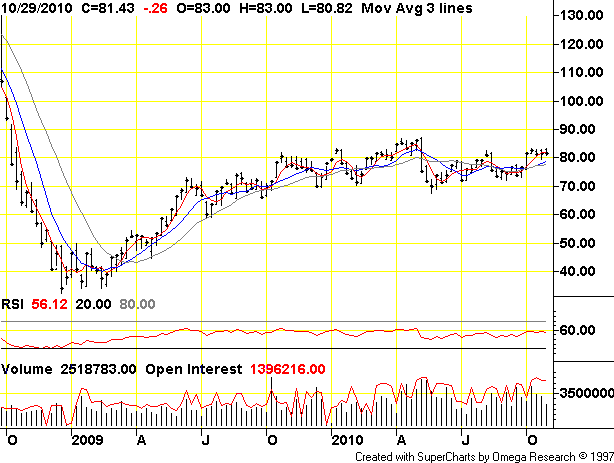 In the past two years, crude has bottomed at $33, only to come roaring back to the high eighties.

There it sat, trading in a tight range as it built a base at $70.

That’s called a consolidation pattern; it’s also a precursor to the next leg up.

The range is about to change…

Given that Gulf of Mexico regulations, Chinese demand, and Nigerian violence are already priced in, here are six new reasons for oil’s next move up.

Oil is a fungible global commodity. The price of oil is the same all over the globe and it is priced in dollars.

The gold line is the oil ETF, the candlestick is the dollar ETF: 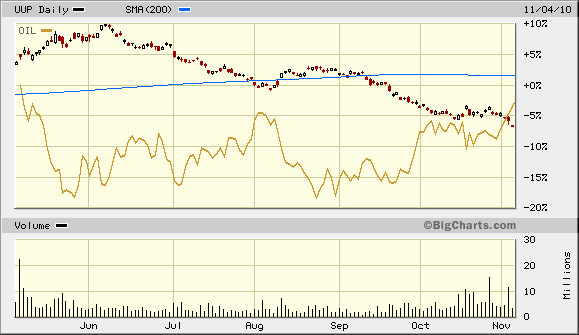 A day after the U.S. voter rejected government spending by sending a host of fiscal conservatives to Washington, the unelected board of the Federal Reserve announced it would pump another $600 billion into the financial markets.

It will do this by buying U.S. Treasury bonds.

The Wall Street Journal reports, “The Federal Reserve on Wednesday set the stage for falling yields on bonds of just about every stripe, providing fuel for a weaker dollar and higher stock and commodities prices.”

Commodities such as cotton, coffee, and copper are at 52-week highs…

Oil will get there.

Yesterday, OPEC boosted its global-oil demand forecast due to a sooner than expected economic turnaround.

The cartel of oil producers upped its consumption forecast by 800,000 barrels a day for 2014, saying it was “more optimistic regarding the speed of economic recovery.”

4. Russia is tapped out

Most of you don’t know this, but Russia has eclipsed Saudi Arabia as the world’s largest supplier of oil.

But this news has spurned nervous hand-wringing, not cause for celebration… What happens when Russia runs out?

President Putin has stated it will take $280 billion in investment dollars to stop a 20% fall in production over the next 10 years. The country must constantly find sizable new fields to keep production growing; the old Siberian fields are declining at a rate of 5% a year.

The American Petroleum Institute issued a report on Tuesday that said the United States crude inventory declined by 4.1 million barrels for the last week in October.

That was larger than the 2-million-barrel decline the market was expecting.

The Republican party captured the U.S. House of Representatives and made strong gains in the Senate. In the future, you will have gridlock — and gridlock is good.

Ultimately, American voters decided they didn’t want to be a European socialist country. This means that business can forecast costs over the next few years as the danger of new, big, costly legislation goes away.

At the very least, the pendulum has swung from the idea of “sticking it to Wall Street” back to “let’s get working.”

The businessman who was sitting on cash due to concerns over the costs of cap-and-trade, for instance, can now build that new factory.

We are two to three years removed from the economic crisis. Given the five stages of bear markets, we are well past the denial stage.

Anger has turned to apathy. Bargaining went down with the foreclosure mess. Most investors are somewhere between depression and acceptance. People with cash are sitting on it, waiting to put it back to work.

The $600 billion from the Fed will drive down interest rates and force them to seek gains elsewhere. The new Congress will ensure it is unhindered in its travels. A lot of this money will go to oil.

This market is going up…

Oil, gold, food, and emerging markets — bank on them.