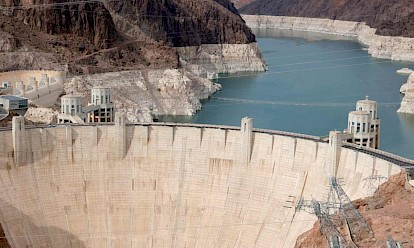 The wellspring of Lake Mead created by the dam’s blocking of the Colorado River has plummeted to an historic low as states in the west face hefty cuts in their water supplies.

Had the formidable white arc of the Hoover dam never held back the Colorado River, the US west would probably have no Los Angeles or Las Vegas as we know them today. No sprawling food bowl of wheat, alfalfa and corn. No dreams of relocating to live in a tamed desert. The river, and dam, made the west; now the climate crisis threatens to break it.

The situation here is emblematic of a planet slowly, inexorably overheating. And the catastrophic consequences of the extreme weather this brings.

Hoover dam is the height of a 60-story building and is 45ft thick at the top and 660ft at the bottom. Its construction, in the teeth of the Great Depression, was a source of such national pride that thousands of people journeyed through the hostile desert to witness the arrival of what has become an enduring monument to collective effort for the public good.

The engineering might of Hoover dam undoubtably reshaped America’s story, harnessing a raucous river to help carve huge cities and vast fields of crops into unforgiving terrain. But the wellspring of Lake Mead, created by the dam’s blocking of the Colorado River and with the capacity to hold enough water to cover the entire state of Connecticut 10ft deep, has now plummeted to an historic low. The states of the west, primarily Arizona and Nevada, now face hefty cuts in their water supplies amid a two-decade drought fiercer than anything seen in a millennium.

“We bent nature to suit our own needs,” said Brad Udall, a climate and water expert at Colorado State University. “And now nature is going to bend us.”

Surveying the dam’s sloping face from its curved parapet, Michael Bernardo, river operations manager at the US Bureau of Reclamation, admits the scarcity of water is out of bounds with historical norms. While there is no “average” year on the Colorado River, Bernardo and his colleagues were always able to estimate its flow within a certain range.

But since 2000, scientists say the river’s flow has dwindled by 20% compared to the previous century’s average. This year is the second driest on record, with the flow into Lake Mead just a quarter of what would be considered normal. 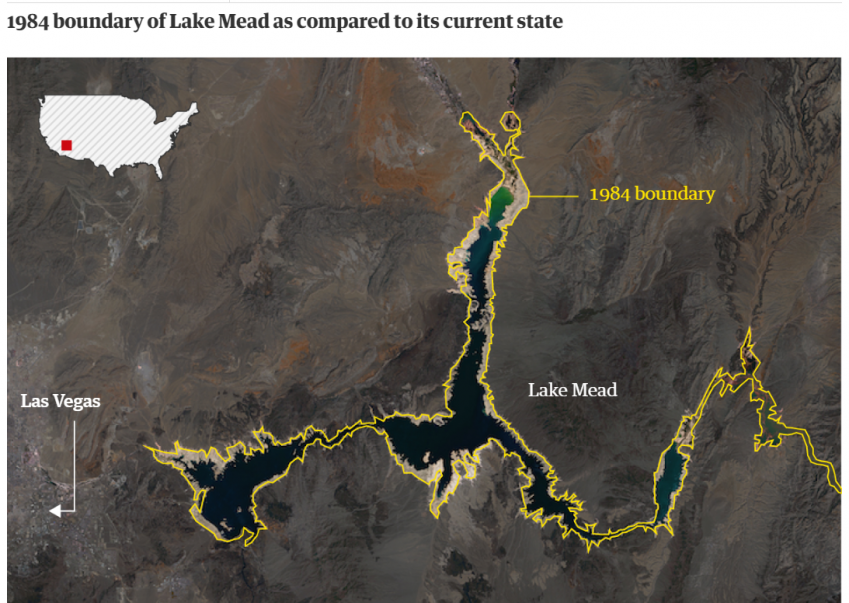 “These are scenarios that aren’t necessarily where we expect to be in our models,” said Bernardo, whose work helps deliver a reliable level of water to thirsty western states. Nearly 40 million people, including dozens of tribes, depend on the river’s water. “We’re getting those years that are at the extreme ends of the bell curve. We’ve seen extremes we haven’t seen before, we now have scenarios that are very, very dry.”

In June, the level of Lake Mead plunged below 1,075ft, a point that will trigger, for the first time, federally mandated cuts in water allocations next year. The Bureau of Reclamation (the government agency originally tasked with “reclaiming” this arid place for a new utopia of farmland and a booming western population), expects this historic low to spiral further, dropping to about 1,048ft by the end of 2022, a shallowness unprecedented since Lake Mead started filling up in the 1930s following Hoover dam’s completion. This will provoke a second, harsher, round of cuts.

“We’ve known this point will arrive because we’ve continued to use more water than the river provides for years,” said Kathryn Sorensen, a water policy expert at Arizona State University. “Things look pretty grim. Humans have always been good at moving water around but right now everyone will need to do what it takes to prevent the system from crashing.”

Seven states – California, Utah, Arizona, Colorado, Wyoming, New Mexico and Nevada – and Mexico are bound by agreements that parcel out the river’s water but those considered “junior” partners in this arrangement will be hit first.

Should second tier cuts occur, Arizona will lose nearly a fifth of the water it gets from the Colorado River. Nevada’s first-round cut of 21,000 acre-ft (an acre-ft is an acre of water, one foot deep) is smaller, but its share is already diminutive due to an archaic allotment drawn up a century ago when the state was sparsely populated.

The latest era of cooperation between states that rely upon the Colorado River has now entered the “realm of lose-lose”, according to Colby Pellegrino, deputy general manager of resources for the Southern Nevada Water Authority. “Everyone’s going to have to do more with less, and that’s really going to be challenging for people,” she said. “‘Drought’ suggests to a lot of people something temporary we have to respond to, but this could permanently be the type of flows we see.”

The decline of Lake Mead is apparent even at a cursory glance. The US’s largest reservoir is now barely a third full, the dark basalt rock of its canyon walls blanched by a distinctive white calcium ring where the water level once was. This level has plunged by about 130ft in the past 20 years and is currently receding by about a foot a week as farms hit their peak irrigation period.

The pace of change has been jarring to the millions of people who regularly boat, fish and swim on the lake, with the National Park Service recently laying down new steel platforms to extend launch ramps that no longer reach the water. Some marinas have been wrenched from their moorings and moved because they have been left marooned in baking sediment.

Seen from above in time lapse over the years, Lake Mead looks like a spindly puddle withering away in the Mojave Desert, as nearby Las Vegas, which gets almost all of its water from the lake and went a record 240 days last year without rain, balloons in size. The west’s ambitions have crunched into the searing reality of the Anthropocene.

The Colorado River rises in the lofty Rocky Mountains, before tumbling through 1,450 miles of mountains, canyons and deserts until it reaches the Sea of Cortez in Mexico. Seasonally melting snow has traditionally replenished the river but snowpack on mountaintops in the west has declined by an average of 19% since the 1950s, while soaring temperatures have dried out soils and caused more water to evaporate.

This morphing climate, plus the rampant extraction of water for everything from golf courses in Phoenix to vegetables growing in California to gardens in Denver, means the Colorado fizzles out in dry riverbed before it even reaches its Mexican delta.

Only 1.8% of the west is not in some level of drought, with California, Arizona and New Mexico all experiencing their lowest rainfalls on record over the previous 12 months. Lakes in Arizona are now so low they can’t be used to fight the fires themselves spurred by drought, while the retreat of Lake Folsom in California uncovered the wreckage of a plane that crashed 56 years ago. The governor of Utah has resorted to asking people to pray for rain.

The heat has been otherworldly, with Phoenix recently enduring a record six straight days above 115F (46.1C). A “heat dome” that settled over the usually mild Pacific north-west pushed temperatures to reach a record 108F (42.2C) in Seattle and caused power lines to melt and roads to buckle in Portland. A few hundred miles north, a fast-moving wildfire incinerated the town of Lytton in British Columbia the day after it set a Canadian temperature record of 121F (49.4C). Barely into summer, hundreds of people have already died from the heat along the west coast.

The west has gone through periods like this “megadrought” , with only occasional respite, for the past two decades. But scientists have made clear the current conditions would be virtually impossible without human-caused climate change, pointing to a longer-term “aridification” of the region. All of the water conservation efforts that have kept shortages at bay until now risk being surpassed by the rising heat.

“The amount of water now available across the US west is well below that of any time in modern civilization,” said Park Williams, a hydroclimatologist at Columbia University. Research by Williams and colleagues last year analyzed tree rings to discover the current dry period is rivaled only by a spell in the late 1500s in a history of drought that reaches back to around 800, with the climate crisis doubling the severity of the modern-day drought.

“As the globe warms up, the west will dry out,” said Williams. “The past two years have been shocking to me, I never thought I would see downtown LA reach 111F as it’s so close to the ocean, but we have some of the driest conditions in 1,200 years so the dice are loaded for more heatwaves and fires. This could be the tip of the iceberg, we may well see much longer, tougher droughts.”

In the guts of the Hoover dam, down bronze-clad elevators and through terrazzo corridors, a line of enormous turbines help funnel water out downstream, creating hydro-power electricity for more than 1m households in the process. Five of the 17 turbines, each weighing the same as seven blue whales, have been replaced in recent years with new fittings more suited to operating in lower lake levels.

Even with these adaptions, however, the decline of Lake Mead has caused the amount of hydro power generated by the dam to drop by around 25%. The drought is expected to cause the hydro facility at Lake Oroville, California, to completely shut down, prompting a warning from the United States Energy Association that a “megadrought-induced electricity shortage could be catastrophic, affecting everything from food production to industrial manufacturing”. The association added that such a scenario could even force people to move east, in what it called a “reverse Dust Bowl exodus”.

Bernardo said a similar shutdown of the Hoover dam would require more than 100ft in further water level retreat, which is not anticipated, although he finds himself constantly hoping for the rains that would ease the tightening shortages.

“We all want the nice weather but we need those good storms to build everything back up,” he said.

“We’d need three or four above average years, back to back, to restore the lake. Your guess is as good as mine whether we’ll get that. I’ll continue to watch the weather, every day.”