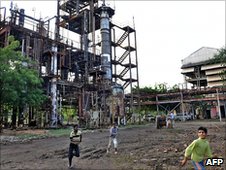 Indian Environment Minister Jairam Ramesh has said the secret dumping by the government of toxic waste from the Bhopal chemical disaster was wrong.

People living near an incinerator where 40 tonnes of waste were taken two years ago, say it damaged their health.

Visiting the plant, Mr Ramesh promised transparency in the disposal of more than 300 tonnes of remaining waste.

More than 4,000 people died after the toxic gas leak from the Union Carbide pesticide plant in Bhopal in 1984.

It is considered the world’s worst industrial accident.

Mr Ramesh, who was not environment minister at the time of the secret night-time dumping in Pithampur, said the continuing clean-up had to be done openly.

“I admit as minister that it was wrong to have brought those 40 tonnes of waste to Pithampur,” he said.

“Whatever we do needs to be done with adequate transparency. I am ready to admit publicly that transporting that waste from the Union Carbide factory secretly during the night hours was wrong.”

Angry villagers who live near the incinerator blocked a road and shouted slogans when Mr Ramesh arrived at the plant on Saturday, the Times of India reported. They want the facility shut down.

A year after poisonous gas from the Union Carbide plant poured into Bhopal’s slums, local officials collected 350 tonnes of waste and left it in the factory yard. Most of it is still there.

There has been outrage over last month’s court verdicts into who was responsible for the tragedy and also the amount of compensation offered to victims.

Seven former managers at the plant were given two-year jail sentences, but campaigners say senior figures at the US-based Union Carbide parent group should also be held responsible.

Last month, campaigners denounced a $280m (£186m) compensation package announced by the government for victims of the disaster.

The package was the latest in a series of pay-offs made by authorities to victims of the disaster.