Worried about Earth's future? Well, the outlook is worse than even scientists can grasp

Anyone with even a passing interest in the global environment knows all is not well. But just how bad is the situation? Our new paper shows the outlook for life on Earth is more dire than is generally understood.

The research published today reviews more than 150 studies to produce a stark summary of the state of the natural world. We outline the likely future trends in biodiversity decline, mass extinction, climate disruption and planetary toxification. We clarify the gravity of the human predicament and provide a timely snapshot of the crises that must be addressed now.

The problems, all tied to human consumption and population growth, will almost certainly worsen over coming decades. The damage will be felt for centuries and threatens the survival of all species, including our own.

Our paper was authored by 17 leading scientists, including those from Flinders University, Stanford University and the University of California, Los Angeles. Our message might not be popular, and indeed is frightening. But scientists must be candid and accurate if humanity is to understand the enormity of the challenges we face.

Getting to grips with the problem

First, we reviewed the extent to which experts grasp the scale of the threats to the biosphere and its lifeforms, including humanity. Alarmingly, the research shows future environmental conditions will be far more dangerous than experts currently believe.

This is largely because academics tend to specialise in one discipline, which means they’re in many cases unfamiliar with the complex system in which planetary-scale problems — and their potential solutions — exist.

What’s more, positive change can be impeded by governments rejecting or ignoring scientific advice, and ignorance of human behaviour by both technical experts and policymakers.

More broadly, the human optimism bias – thinking bad things are more likely to befall others than yourself – means many people underestimate the environmental crisis.

Our research also reviewed the current state of the global environment. While the problems are too numerous to cover in full here, they include: 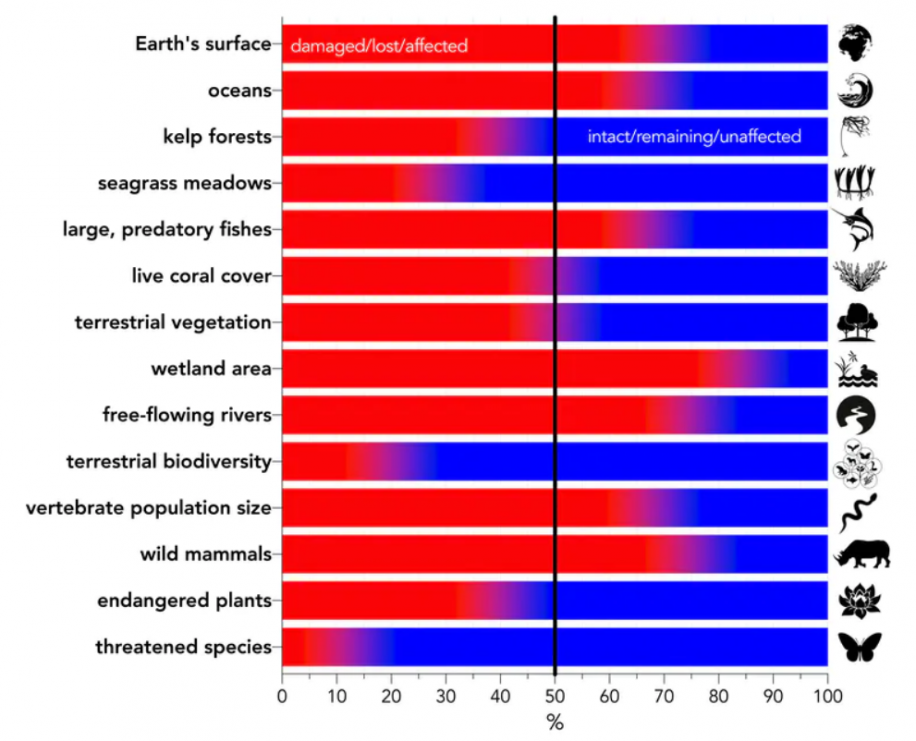 A bad situation only getting worse

The human population has reached 7.8 billion – double what it was in 1970 – and is set to reach about 10 billion by 2050. More people equals more food insecurity, soil degradation, plastic pollution and biodiversity loss.

Essentially, humans have created an ecological Ponzi scheme. Consumption, as a percentage of Earth’s capacity to regenerate itself, has grown from 73% in 1960 to more than 170% today.

High-consuming countries like Australia, Canada and the US use multiple units of fossil-fuel energy to produce one energy unit of food. Energy consumption will therefore increase in the near future, especially as the global middle class grows.

Then there’s climate change. Humanity has already exceeded global warming of 1°C this century, and will almost assuredly exceed 1.5 °C between 2030 and 2052. Even if all nations party to the Paris Agreement ratify their commitments, warming would still reach between 2.6°C and 3.1°C by 2100.

The danger of political impotence

Our paper found global policymaking falls far short of addressing these existential threats. Securing Earth’s future requires prudent, long-term decisions. However this is impeded by short-term interests, and an economic system that concentrates wealth among a few individuals.

Right-wing populist leaders with anti-environment agendas are on the rise, and in many countries, environmental protest groups have been labelled “terrorists”. Environmentalism has become weaponised as a political ideology, rather than properly viewed as a universal mode of self-preservation.

Financed disinformation campaigns, such as those against climate action and forest protection, protect short-term profits and claim meaningful environmental action is too costly – while ignoring the broader cost of not acting. By and large, it appears unlikely business investments will shift at sufficient scale to avoid environmental catastrophe.

Fundamental change is required to avoid this ghastly future. Specifically, we and many others suggest:

Many organisations and individuals are devoted to achieving these aims. However their messages have not sufficiently penetrated the policy, economic, political and academic realms to make much difference.

Failing to acknowledge the magnitude of problems facing humanity is not just naïve, it’s dangerous. And science has a big role to play here.