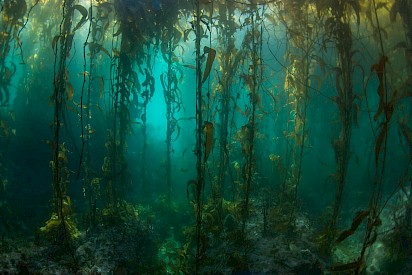 Lush beds of seaweed sustain coastal food webs, cycle essential nutrients, clarify water, foster fisheries, and shelter sea life. But in recent years, it is seaweed’s ability to soak up carbon dioxide, and the potential it could play in reining in planet-heating emissions, that has nabbed headlines.

Recent estimates suggest that when seaweeds die and sink to the seafloor, they bring serious amounts of carbon with them to be locked away in deep-sea sediments. The amount is not nearly as much as mangroves, seagrasses, or trees sequester each year, but it’s enough to make a dent in greenhouse gas emissions. Spurred by this, companies are exploring seaweed’s potential in the bourgeoning “blue carbon” offset market.

There is a snag, though. New research led by marine scientist John Barry Gallagher at the University of Tasmania in Australia, a self-described “blue carbon and wetland iconoclast,” suggests that when you consider the entire ecosystem the seaweed supports—not just the seaweed itself—some of these environments release more carbon than they store. The finding has caused a stir among seaweed scientists.

What tips the balance toward seaweed ecosystems being carbon sources rather than sinks are the contributions of sea squirts, shellfish, and other phytoplankton-eating filter feeders. Gallagher uses data drawn from 18 studies of tropical, temperate, and polar seaweed habitats to argue that, collectively, these inhabitants breathe out more carbon dioxide than the seaweed absorbs.

Gallagher’s conclusions could have ramifications for the nascent seaweed carbon offset industry, which he says is based on a premature understanding of seaweed carbon storage. If estimates of seaweed ecosystems’ net carbon storage are overblown, companies buying carbon credits could unwittingly be increasing emissions rather than zeroing them out, he says.

But Gallagher’s findings have been met with resistance from a group of pioneering blue carbon researchers who have penned a formal rebuttal to his study. They say Gallagher’s study is deeply problematic and plagued with errors, and that its conclusions are flawed because it cherry-picks data.

Marine ecologist Karen Filbee-Dexter at the Institute of Marine Research in Norway is part of the group that drafted the rebuttal. She says trying to capture how the marine life that resides within seaweed beds cycle carbon is a worthwhile endeavor. But she says the analysis is misleading because it includes data from multiple types of seaweed ecosystems, which distorts the global picture. The study, she says, includes rock-hard algae, sea urchin barrens, and turf algae that grow in shallow water only a few centimeters above the seafloor. Previous research, however, suggests the most effective at storing carbon are fleshy seaweeds that grow as large forests in deep water and which cast their fronds out to sea, carrying carbon with them.

The study, Filbee-Dexter says, “is pitched in a way that disregards evidence that seaweed [ecosystems] do sequester carbon under many scenarios.”

Undeterred, Gallagher says he is eager to see what other pundits make of his analysis. He hopes it spurs people to take more measurements of carbon fluxes in seaweed canopies because, he says, “we need more data to know exactly how important it is.”

Catriona Hurd, a seaweed physiologist at the University of Tasmania who was not involved in the research, says she understands why the suggestion that some seaweed ecosystems might not be carbon sinks has ruffled feathers. But Hurd says the study highlights the complexity of accounting for carbon flows into and out of seaweeds, between the atmosphere and the ocean, and from coastlines into the deep sea.

“We have to do a lot more work,” says Hurd, before seaweeds can be used to offset carbon emissions. Hurd points to her own research, which outlines the long list of factors that scientists still need to iron out, including how much carbon seaweed ecosystems draw out of the atmosphere, what fraction sinks into marine sediments, and whether that carbon stays locked up for the long haul.

But Hurd, like Gallagher in his paper, is quick to note that this reanalysis of seaweed ecosystems’ role as potential carbon sinks does not diminish all of the other vital jobs seaweed plays in coastal ecosystems. Ecologist emeritus Ik Kyo Chung at Pusan National University in South Korea, who also wasn’t involved in the research, says it doesn’t detract from the huge potential of seaweed farms to produce low-emissions food, fuel, pharmaceuticals, and fodder for livestock.

But Filbee-Dexter fears Gallagher’s paper might seed doubt around initiatives to protect and restore wild seaweed ecosystems, many of which are linked to their carbon sink potential.

“We need to talk about these [seaweeds] not just as natural carbon solutions, but much more broadly in terms of all of the benefits they provide,” she says. “Carbon is one small part of it.”