Rare earths (REEs) have become sort of a wizard behind a curtain.

Everyone knows the term and that they’re important, but they’ve never actually seen them.

REEs have become almost mythical, the unicorns of metals.

Dysons, and hybrids, and wires! Oh my!

Let’s begin with the immense and growing uses for rare earths.

In a very tangible way, REEs have entered mainstream culture.

The Buckyballs on most of the desks around the office boast on the box they’re made of “powerful rare earth magnets.”

A Dyson vacuum commercial touts a motor that “uses neodymium magnets to spin up to five times faster than a Formula One engine.”

Those same magnets are used to make motors for every single hybrid car produced: the Prius, Insight, LEAF, Focus — all of them.

Terbium and dysprosium are used to preserve the magnetic properties; lanthanum is used in the batteries.

And it’s not just cars…

REEs are in most electronics:

You see how easy it is to put a face on these wizard metals?

They’re in multiple devices we use every day.

And that’s where the enormous profits come in.

And supply simply can’t keep up… Supply, by the way that’s 97% controlled by the Chinese.

Major mining company Lynas Corp. (ASX: LYC) recently declared a shortfall of that scope would “lead to higher prices because users need the elements, which can’t be easily replaced.”

And as with most metals, the mining companies are making the most money. It’s not like you can run out and just buy some dysprosium…

The above-mentioned Lynas is up 200% in six months. Others have crested the 600% mark. 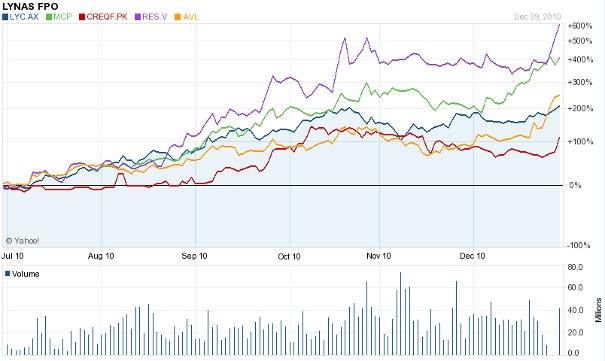 These stocks will only go higher as sales of hybrids, laptops, smartphones, and flat-screen TVs continue to rise — and as access to REE supply becomes critical to production.

The race is on to find new supply outside of China, and one company has found what early estimates show is the largest deposit of REEs in the world.

Rare earths don’t have to be some misunderstood, complex topic…

They’re simply a group of metals with unique properties that are crucial to modern appliances. And we need more of them than currently exists.

As with any commodity, it pays to buy when demand is high and supply is low.

And that’s exactly the situation rare earths are in right now.