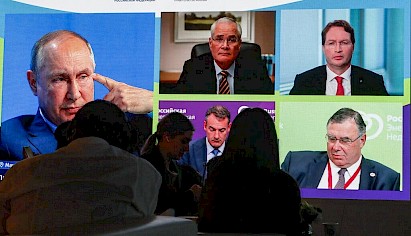 Natural gas prices have soared in recent months, and with them Europeans’ heating and electricity bills. That has only increased Russia’s sway over the continent’s energy policies as its largest supplier of natural gas exports.

Mr. Putin’s comments, at an energy conference in Moscow, were the most direct yet linking high prices to approval for the Nord Stream 2 pipeline, which connects Russia to Germany under the Baltic Sea and is staunchly opposed by many Eastern European nations. Gas has not begun flowing through it, pending regulatory approval.

“The German regulator should make this decision. They have not yet decided,” Mr. Putin told the gathering. “Of course, if we could expand supplies along this route, then, 100 percent, I can say with absolute certainty, the tension on the European energy market would significantly decline, and that would influence prices, of course. This is an obvious thing.”

The remarks seemed to underscore suspicions in Europe, where some critics believe Russia is holding back extra natural gas from the market to pressure approval of the new 750-mile pipeline.

Nord Stream 2 is the latest of several undersea pipes laid by Russia in a decade-long strategy to replace pipelines running through former Soviet and Eastern Bloc nations by going around them, through the Black and Baltic Seas.

Mr. Putin has said the new pipelines are needed to replace aging infrastructure and guarantee uninterrupted service to Europe. But they also deprive countries of some transit fees, create separate gas supply systems for Western and Eastern Europe and expose former Soviet republics like Ukraine to targeted energy cutoffs, a powerful political weapon.

The Trump administration targeted sanctions against German companies that helped build the pipeline for Gazprom, the Russian energy monopoly, but in August, President Biden dropped the U.S. threat to block it in order to smooth relations with Germany.

The pipeline has been contentious in U.S. politics, too. Senator Ted Cruz, Republican of Texas, has blocked confirmation of dozens of Mr. Biden’s diplomatic appointments, including more than 50 would-be ambassadors, to insist that the president do more to halt European approval for Nord Stream 2.

Runaway gas prices in Europe this fall have played into Mr. Putin’s hands. Russia, the world’s largest natural gas exporter, provides about 40 percent of the gas imported to Europe, which has increasingly turned to natural gas to generate power as coal-burning plants have been shut down. As European consumers pay ever more for electricity, their patience with the intricacies of Eastern European security politics may wane.

At the conference, called Russian Energy Week, Mr. Putin noted that utility bills — and frustration — were rising in Europe. Natural gas is crucial for generating electric power, and he said electricity costs about 10 times more in European Union countries than in Russia.

Energy analysts and company executives say a variety of factors have driven up costs, including the weather, the abrupt acceleration of national economies after pandemic restrictions, and high prices in China that prompted U.S. liquefied natural gas producers to send tankers to Asia rather than Europe.

Responding to criticism that Russia is trying to manipulate the natural gas markets to win approval for Nord Stream 2, Mr. Putin denied any Russian role in driving up prices. He blamed European Union policies encouraging alternative energy sources, such as wind and solar farms. Mr. Putin also pointed out that American liquefied natural gas exporters had increased shipments to China rather than bolster supplies in Europe.

Mr. Putin said Russia had fulfilled all its contracts to send gas to Europe and had supplied more natural gas this year than last year. Russia, he said, is ready to send more if companies negotiate new deals with Gazprom.

“We are increasing” gas supplies to Europe, he said. “And if you ask us to increase more, we will. We will increase as much as our partners ask.”

Russia has increased gas supplies through the Ukrainian pipeline system, he said, but cannot send more because the pipes are in poor condition. Ukrainian officials have disputed this assertion.

Germany’s regulator has until early January to assess whether Nord Stream 2 meets European Union regulations that prohibit producers of natural gas from owning pipelines that transport it to customers, an issue relevant to Gazprom’s degree of control over the European energy market.

The European Commission must then review the decision, which could take until May.