Powerful quake off Japan rekindles fears of another Fukushima 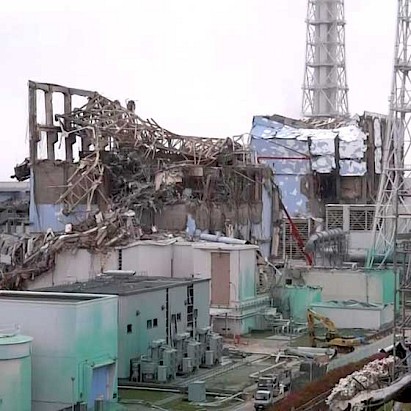 TOKYO — A powerful undersea earthquake off the Fukushima region of Japan, where a tsunami a decade ago set off one of the worst nuclear plant disasters in history, shook buildings for more than two minutes late Wednesday night.

Then the waiting began.

Shortly after the quake hit at 11:36 p.m., the Japan Meteorological Agency issued tsunami warnings for the prefectures of Fukushima and Miyagi, and thousands of residents, many of whom remember only too well the destruction of 2011, evacuated.

“Please put out any fires,” officials in the city of Minamisoma, in Fukushima, told residents as they urged them to get to safer ground. “Please listen to the TV and radio and act calmly and accordingly.”

Hours later, the warnings were lifted.

Several small tsunami waves measuring perhaps 20 centimeters in height (eight inches) were reported in two communities, but they were one-fifth the size that was forecast — and tiny compared to the 45-foot wave that devastated the region in 2011. More than 19,000 people died in that catastrophe.

“In a lot of areas, there was a lot of stuff thrown everywhere, like files and everything,” said Shelly Reid, a staff member at Minamisoma City Hall. “Some roads were damaged, especially along the coast. There were some landslides.”

At least three people were confirmed dead after Wednesday’s quake, with more than 190 injured.

The earthquake measured magnitude 7.4 — strong enough to do serious structural damage — but the magnitude 9 Tohoku quake that caused the catastrophic 2011 tsunami was hundreds of times as powerful. The epicenter of the earthquake on Wednesday was 20 miles off the east coast of Japan, and about 35 miles below the sea.

“We usually don’t see a destructive tsunami until you get to around 7.5,” said Don Blakeman, a geophysicist with the National Earthquake Information Center in Golden, Colo.

But the damage reports were still coming in early Thursday morning, and the quake, which could be felt in Tokyo, almost 200 miles away, did more than just rattle nerves in a country where many wait for the earth beneath their feet to move again at any moment.

Two million people were left without power, if only briefly, and fire departments were called to rescue passengers trapped in elevators. A bullet train carrying about 100 people between the Fukushima and Shiroshizaou stations derailed, although there were no reports of injuries. And passengers on subway trains posted videos of cars swaying precariously as they made their way through tunnels.

Prime Minister Fumio Kishida said the country’s Self-Defense Forces had been mobilized to assess the damage.

“We are still trying to understand the situation and collect information,” he said at a news briefing. “The government will come together to save people’s lives and to make all-out efforts to provide safety and provide accurate information.”

The intensity of the earthquake equaled that of the Kobe earthquake of 1995, which killed more than 6,000 people. The difference was its depth below the sea.

Many Japanese noted that the quake occurred just five days after the country observed the 11th anniversary of the Fukushima disaster.

“Another big earthquake in Tohoku,” Aiko Sawada, a retired medical researcher, wrote on Twitter. “And so soon after the anniversary of 3.11. I pray that the damage stays minimal.”

After the earthquake in 2011, one of the most powerful ever measured, tsunami waves breached the protective sea walls of the Fukushima Daiichi nuclear plant and inundated the facility, leading to the meltdown of three reactors.

On Thursday, Japanese officials set out to inspect nuclear plants in the region soon after the quake hit. They said they had detected no abnormalities at plants in Fukushima; in Onagawa in Miyagi Prefecture; or in Tokai in Ibaraki Prefecture.

The Tokyo Electric Power Company did say that a fire alarm had gone off at one of the reactors at the defunct Fukushima Daiichi plant. The plant has been undergoing an enormous cleanup since the disaster 11 years ago.

And water pumps for spent fuel cooling pools at a separate power plant in Fukushima were down early Thursday, but Tokyo Electric said there was still water in the pools for now, and that both pumps had returned to operation before 2 a.m., according to NHK, the public broadcaster.

The tsunami that crippled that plant left Japan with a formidable challenge: How does a quake- and tsunami-prone island nation dotted with nuclear reactors protect against another calamity?

To quell lingering fears, Japanese nuclear regulators in recent years have ordered a flurry of new safety measures at the nation’s reactors, including new sea walls, flood gates and protection for the vital backup generators that power the pumps that cool the hot reactor cores.

But the task is considerable, and deep distrust of nuclear power persists among many Japanese.

At the Hamaoka nuclear power plant, for example, which is perched on the Pacific coast west of Tokyo, workers built a 72-foot sea wall, among the tallest in the country, to protect its three reactors. Then came the bad news: Scientists working on new projections of potential tsunamis in the region warned last year that waves could reach almost 74 feet.

Hamaoka remains shuttered, as do many of Japan’s other reactors.

A decade later, nuclear power, which once provided about a third of Japan’s electricity, now accounts for only a few percent. Thirty-three reactors are capable of generating power — but just five are doing so. The rest are either undergoing inspections or awaiting approval to restart.