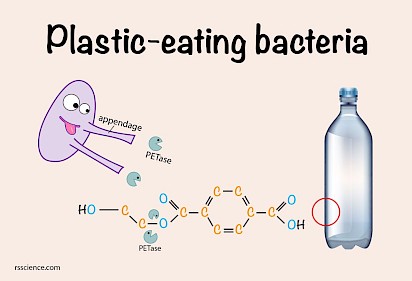 While scavenging through a compost heap at a Leipzig cemetery, Christian Sonnendecker and his research team found seven enzymes they had never seen before.

They were hunting for proteins that would eat PET plastic — the most highly produced plastic in the world. It is commonly used for bottled water and groceries like grapes.

The scientists weren’t expecting much when they brought the samples back to the lab, said Sonnendecker when DW visited their Leipzig University laboratory.

It was only the second dump they had rummaged through and they thought PET-eating enzymes were rare.

But in one of the samples, they found an enzyme, or polyester hydrolase, called PHL7. And it shocked them. The PHL7 enzyme disintegrated an entire piece of plastic in less than a day.

To ensure their discovery wasn’t a fluke, Sonnendecker’s team compared PHL7 to LCC, with both enzymes degrading multiple plastic containers. And they found it was true: PHL7 was faster.

“I would have thought you’d need to sample from hundreds of different sites before you’d find one of these enzymes,” said Graham Howe, an enzymologist at Queens University in Ontario, Canada.

Howe, who also studies PET degradation but was not involved in the Leipzig research, appeared to be amazed by the study published in Chemistry Europe.

“Apparently, you go to nature and there are going to be enzymes that do this everywhere,” said Howe.

PET plastic is everyone

Although PET plastic can be recycled, it does not biodegrade. Like nuclear waste or a nasty comment to your partner, once PET plastic is created, it never really goes away.

It can be refashioned into new products — it’s not hard to create a tote bag from recycled water bottles, for example. But the quality of the plastic weakens with each cycle.

So, a lot of PET is eventually fashioned into products like carpets and — yes — an exorbitant number of tote bags that end up in landfill sites.

There are two ways to look at solving this problem: The first is to stop production of all PET plastic.

But the material is so common that even if companies stopped producing it immediately, there would still be millions of empty soft drink bottles — or tote bags fashioned from those bottles — lying around for thousands of years.

The second way is to force the plastic to degrade. Scientists have been trying to find enzymes that will do that for decades and in 2012 they found LCC, or “leaf-branch compost cutinase.”

LCC was a major breakthrough because it showed that PETase, a component of LCC, can be used to degrade PET plastic when it is combined with another enzyme known as an esterase.

Esterase enzymes are used to break chemical bonds in a process called hydrolysis.

Scientists working on LCC have found that the enzyme does not differentiate between natural polymers and synthetic polymers — the latter being plastic. Instead, LCC recognizes PET plastic as a naturally occurring substance and eats it like it would a natural polymer.

Since the discovery of LCC, researchers like Sonnendecker have been looking for new PET-eating enzymes in nature. LCC is good, they say, but it has limitations. It is fast for what it is, but it still takes days to break down PET and the reactions have to occur at very high temperatures.

Other scientists and researchers have been trying to figure out how to engineer LCC to make it more efficient.

A French company called Carbios is doing that. They are engineering LCC to create a faster, more efficient enzyme.

Elsewhere, researchers at the University of Texas in Austin have created a PET-eating protein using a machine learning algorithm. They say their protein can degrade PET plastic in 24 hours.

David Zechel, a professor of chemistry at Queen’s University said these approaches always start with something that is known — the researchers don’t necessarily find anything new, but work to improve what has already been discovered.

This type of engineering is important as researchers try to create the optimal enzyme to degrade PET, said Zechel.

Sonnendecker’s work shows that “we haven’t even remotely scratched the surface” in terms of the potential of naturally occurring enzymes “with respect to PET,” he said.

Sonnendecker’s newly discovered enzyme has its limitations, too. It can break down the containers you buy your grapes in at the grocery store, but it can’t break down a soft drink bottle. Not yet.

The PET plastic used in drink bottles is stretched and chemically altered, making it tougher to biodegrade than the PET used in grape containers.

In tests, Sonnendecker’s team has developed a pre-treatment that is applied to PET bottles, making it easier for the enzyme to degrade the plastic. But that research has yet to be published.

With industry help, said the researcher, technology using PHL7 to break down PET at a large scale could be ready in around four years.