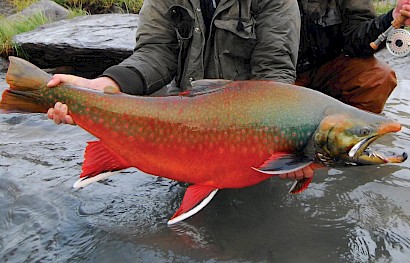 Hunters in Nunavut say they’ve been finding plastic inside the bellies of Arctic char — a fish that’s an essential part of Inuit culture, often eaten raw, frozen or boiled.

Bobby Greenley, chairperson of the Ekaluktutiak Hunters and Trappers Organization in Cambridge Bay, said the issue started cropping up four or five years ago.

“We’re finding it in the stomachs of the fish we’re doing studies on,” he said. “We’re starting to get more whales around our area, they might be sucking plastic into their stomachs as well.”

Greenley said it’s bad for the animals — but bad for people’s safety, too.

“It can get sucked up into people’s outboard [boat] motors and cause them damage. Next thing you know, you’re rescuing people who are broken down in the middle of the ocean.”

Billy Merkosak, a hunter from Pond Inlet, has seen plastic inside fish too. It’s a discovery that’s “very scary” and leaves him wondering about the health of his community.

Plastic comes from near and far

Scientists say it’s hard to know how much plastic pollution is in the Arctic, but a recent study published in the journal Nature Reviews Earth & Environment takes a look at where it’s coming from and what can be done about it.

Jennifer Provencher, a scientist with Environment and Climate Change Canada, and one of the report’s authors, says plastic is coming from a mix of local and international sources — sometimes even carried north by migrating animals.

Provencher says consumer plastic (like food packaging) and industrial plastic (like nurdles or pellets used to make plastic things) have been found inside migratory birds in the Arctic.

“In Nunavut, there’s no real big shipping lanes …  there’s no big plastic factories. So we do know that at least some of the plastics in the Arctic are kind of being subject to long-range transport,” she said.

The study says items in the Arctic were recognized as coming from Russian and Scandinavian trawlers and also from the UK, Iceland, the Faroe Islands, the Netherlands, Germany, Italy, Spain, Canada, Argentina, Brazil and the U.S.

But it also comes from local sources — like dumps.

“There’s lots of reports of plastic bags and things kind of blowing out of those landfills,” said Provencher, pointing to the dump in Iqaluit as an example of a cause for concern.

Kevin Kalluak, chairperson of the Arviat Hunters and Trappers Organization, says leaving beverage containers along popular trails and hunting grounds near Arviat appears to be “becoming a habit.”

The organization regularly reminds people to bring their garbage back to town, he said.

Provencher says although Arctic animals don’t appear to be consuming large amounts of plastic, it can cause problems when ingested. Her research also looks at contaminants attached to plastic that “get lost to the environment” and disrupt animal hormones.

The Inuit Circumpolar Council (ICC) says some contaminant levels in the Arctic are on the decline, but plastic pollution — and the contaminants they carry with them — pose a “new, added threat.”

“It’s just one more thing that shouldn’t be in the Arctic, that is in the Arctic,” said Eva Kruemmel, an adviser to the ICC on contaminants.

The United Nations approved an agreement to create the world’s first-ever global plastic pollution treaty at the start of March, and Kruemmel said the ICC wants to see those negotiations lead to a “strong, binding instrument” that regulates plastic from the start of its lifecycle to the end.

Merkosak said it’s hard to come up with a local solution for a global problem. But one change he’d like to see — in Pond Inlet and throughout the territory — is a ban on plastic packaging in grocery stores.

“It’s accumulating more every year and we see more plastic stuff on the shelves, to this day, and it’s not helping at all,” he said.

Provencher said there are also waste management policies that can help, but that a whole “toolbox” of solutions are needed because plastic pollution has many sources and ends up in many different places.

Provencher said southern-based research shows plastic pollution is a big problem, and the goal of her work is to inform policies and ensure it doesn’t reach that level in the Arctic too.