Now that the Peak has passed, all sorts of interesting tidbits are emerging.

Apparently, the oil cartel pumped 26.78 million barrels per day (mmbd) this year. Yet they have a production limit of only 24.845 mmbd, set at the end of 2008 in response to the recession.

So your friendly neighborhood fuel gang has been breaking its output limit by 1.934 million barrels — everyday, all year long.

OPEC’s been lying… That’s nothing new.

What’s important here is to note the willingness to extract as much as they can as prices rise.

If the price of oil creeps high enough, OPEC will officially raise its target to cash in.

$100 seems to be the obvious trigger to make that happen, and the consensus is that it will happen this year.

Adding to the pricing fire, U.S. stockpiles declined by 19 million barrels this month thanks to intense cold and holiday travel. That’s the biggest monthly decrease since December 2006.

I’m sure you’ve noticed gas station marquee numbers are back on the march.

Prices at the pump have officially broken $3.00 for the first time since October 2008. And they aren’t expected to ease anytime soon.

John Hofmeister (former President of Shell, current Head of Citizens for Affordable Energy) is touring TV land this week with a new prediction:

We’ll be paying $5.00 per gallon in less than two years, and sometime between 2018 and 2020 there will be another 1970s-style energy shortage requiring rationing.

And this guy didn’t just jump on the bandwagon; he’s been saying for years that “the last days of affordable gas are behind us.”

He’s been attacking our national energy policy since the turn of the century, saying business as usual would lead us to an “energy abyss”.

And like an ever-increasing cadre of oil execs, he admits conventional oil production is in decline, and is convinced we must turn to unconventional sources to fill the gap — and avoid gas station rationing.

There’s still time to put this trend to work for your portfolio. Oil at $200 per barrel implies a 122% increase from today’s prices.

Those stocks and funds are already marching in step: 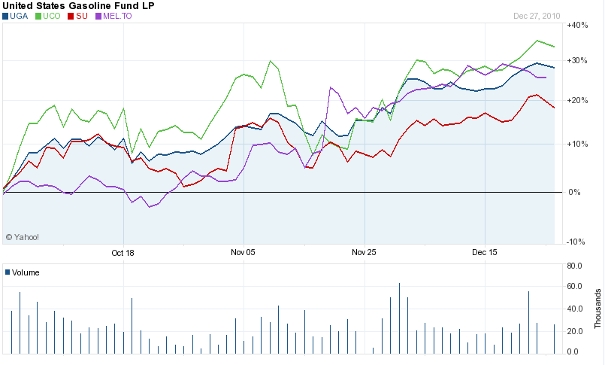 To maximize your investment, you’ll want to check out our latest oil webinar.

It explains the future of drilling for hard-to-get oil, and the one company that will make shareholders rich as it unlocks billions of barrels worth of unconventional reserves.