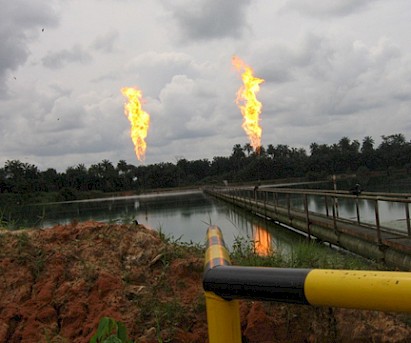 When Royal Dutch Shell sold off its stake in the Umuechem oil field in Nigeria last year, it was, on paper, a step forward for the company’s climate ambitions: Shell could clean up its holdings, raise money to invest in cleaner technologies, and move toward its goal of net zero emissions by 2050.

As soon as Shell left, however, the oil field underwent a change so significant it was detected from space: a surge in flaring, or the wasteful burning of excess gas in towering columns of smoke and fire. Flaring emits planet-warming greenhouse gases, as well as soot, into the atmosphere.

Around the world, many of the largest energy companies are expected to sell off more than $100 billion of oil fields and other polluting assets in an effort to cut their emissions and make progress toward their corporate climate goals. However, they frequently sell to buyers that disclose little about their operations, have made few or no pledges to combat climate change, and are committed to ramping up fossil fuel production.

New research to be released Tuesday showed that, of 3,000 oil and gas deals made between 2017 and 2021, more than twice as many involved assets moving from operators with net-zero commitments to those that didn’t, than the reverse. That is raising concerns that the assets will continue to pollute, perhaps even at a greater rate, but away from the public eye.

“You can move your assets to another company, and move the emissions off your own books, but that doesn’t equal any positive impact on the planet if it’s done without any safeguards in place,” said Andrew Baxter, who heads the energy transition team at the Environmental Defense Fund, which performed the analysis.

Transactions like these expose the messy underside of the global energy transition away from fossil fuels, a shift that is imperative to avoid the most catastrophic effects of climate change.

For the four years before the Umuechem sale in Nigeria, satellites had spotted no routine flaring from the field, which Shell, together with the European energy giants Total and Eni, operated in the Niger Delta. But immediately after those companies sold the field to a private-equity backed firm, Trans-Niger Oil & Gas, an operator with no stated net zero goals, levels of flaring quadrupled, according to data from the VIIRS satellite collected by EDF as part of the analysis. Trans-Niger said last year it intends to triple production at the field.

According to the EDF research, top buyers in recent years have included state-owned oil and gas corporations such as Indonesia’s Pertamina, Qatar Energy and China’s CNOOC, as well as Diversified Energy, an Alabama-based company that has amassed tens of thousands of aging oil and gas wells across Appalachia.

Other top buyers included a handful of less well-known companies. And in a sign of the difficulty of tracking these transactions, the acquirers in numerous other deals weren’t known. Overall, the study showed that the number of transactions that took fossil-fuel assets from public to private ownership comprised the largest share of deals, exceeding the number of private-to-public transfers by 64 percent.

In response to questions Shell said it looked forward to seeing the full EDF report. The Dutch company has said that divestments “are a key part of our efforts to refresh and upgrade our portfolio” as it seeks to reach net zero emissions, which refers to a corporate pledge to not add more greenhouse gases to Earth’s atmosphere than the amount it takes out.

Eni spokeswoman Marilia Cioni referred questions to the local operator, and added that it did not consider asset sales as a tool to reduce emissions. Total and Trans-Niger Oil & Gas didn’t respond to requests for comment on Monday.

This phenomenon, where the production of emissions that drive climate change are transferred from one company to another, is also hindering the cleanup of fossil fuel infrastructure.

In July 2021, the oil and gas driller Apache, which had been struggling with its operations in Texas’s vast Permian Basin, sold about 2,100 wells to a little-known Louisiana operating company, Slant Energy, according to state and federal filings analyzed by ESG Dynamics, a sustainability data firm.

Roughly 40 percent of those wells were inactive. Before Apache sold the lot, the Houston-based company had been plugging an average of 169 wells a year to prevent them from leaking toxic chemicals into groundwater or from emitting methane, a potent greenhouse gas, into the atmosphere. That pace would have meant Apache could finish plugging the backlog of inactive wells in about nine years.

Since Slant took over, it has plugged only two wells, according to the filings. At that pace, it would take 120 years to plug all of the current inactive wells.

The Environmental Protection Agency estimates that each inactive, unplugged well causes greenhouse gas emissions equivalent to between 17,000 to 50,000 miles driven by an average gasoline-powered passenger vehicle. There are already 1.6 million unplugged wells throughout the United States, according to industry tallies, and an increasing number of them are abandoned.

Slant spokesman Sean P. Gill said the numbers from EDF “did not appear to be accurate,” without providing further details. Slant had only recently taken over those wells and “continues to evaluate the economic development of the assets in an environmentally responsible way,” he added.

Apache said it wasn’t valid to assume that a company purchasing its wells would have the same schedule for plugging them.

The concerns raised by emissions that are transferred to different companies also puts a renewed focus on global banking corporations that play a critical role in facilitating coal, oil and gas mergers, acquisitions and other transactions. Climate campaigners calling for divestment from fossil fuels have so far focused on banks’ direct financing of fossil fuel projects. But the recent examples show their mergers-and-acquisitions business can also have significant climate consequences.

Shell, a publicly-traded company, said that it discloses emissions from both its operations and the oil and gas that it produces, has corporate targets for reducing greenhouse gas emissions, and has committed to zero flaring across its operations. But when it sells an oil or gas field, those targets and commitments can fall away for that field.

The new owners of the Umuechem project have said they will focus instead on rapidly ramping up production, which can strain the oil field’s facilities and require significant amounts of flaring. That’s because rapidly increasing oil production often also releases more natural gas, overwhelming the field’s ability to collect the additional gas.

As major oil and gas producers sell more fossil fuel assets, experts and campaigners say, companies and their bankers need to enter into contracts or agreements that commit the buyers to similar disclosures and emissions-reduction targets. And in the case of oil and gas wells and other assets nearing the end of their lives, they argue, corporations shouldn’t be allowed to hand off cleanup responsibilities to operators that may not have the resources, or intent, to invest in the cleanup work.

Kathy Hipple, finance professor at the Bard MBA in Sustainability and senior research analyst at the Ohio River Valley Institute, said one solution would be for auditors or regulators to start scrutinizing every sale, and challenge a transaction if environmental or cleanup obligations or targets aren’t accounted for.

She pointed to Diversified, an operator listed in London, that has become the largest owner of oil and gas wells in the United States in recent years by buying up aging wells, which Prof. Hipple said uses accounting methods that can potentially push cleanup costs far into the future. For example, Diversified has said that its wells will be productive through 2095, allowing it to delay its cleanup costs for decades.

Diversified said that its business model “takes often overlooked or neglected assets, optimizes production, improves environmental performance and responsibly retires” them. It said it aimed to achieve net-zero emissions in 2040.