Nato and climate change: How big is the problem? 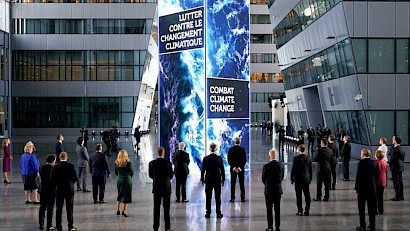 The world’s most powerful defence alliance agreed on Monday to step up efforts to tackle climate change for the first time.

Nato - the North Atlantic Treaty Organisation - said its members have pledged to “significantly reduce greenhouse gas emissions from military activities” in a way that does not impact personnel safety or the effectiveness of their operations.

In a statement released after a summit in Brussels, the group also asked the organisation’s leader to develop a realistic, ambitious and concrete target for reducing Nato emissions and to assess the feasibility of reaching net zero emissions by 2050.

The statement described climate change as “one of the defining challenges of our times”. It said Nato wanted to be a leading international force in understanding and adapting to the ways climate change will impact world security.

How much do Nato allies pollute?

Nato is a powerful political and military alliance between 30 European and North American countries.

It is no secret that militaries use arsenals of gas-guzzling equipment - like armoured vehicles and aircraft - which are sometimes hauled along with troops around the world. But getting accurate data on their environmental impact is notoriously difficult.

A report commissioned by some members of the European Parliament earlier this year said that because militaries are often exempt from publicly reporting their greenhouse gas emissions, it can be difficult to accurately measure how big their environmental impact is.

One study published in 2019 suggested that if the US military were a country, it would rank as the 47th largest emitter in the world on fuel usage alone. But this is not a uniquely US issue.

The International Military Council on Climate and Security (IMCCS) says in its latest annual report that defence remains the single largest consumer of hydrocarbons - like fuel and gas - in the world.

In Monday’s statement Nato said it would develop a “mapping methodology to help Allies measure greenhouse gas emissions from military activities and installations”, which could help set “voluntary goals” to try and reduce these emissions.

The International Military Council on Climate and Security - a separate group of senior military leaders - said in its annual report that the long life-span of military equipment, such as warships, means that defence has locked itself into relying on fossil fuels for “many years to come”.

“This is why it is imperative that we start now by investing massively into research and development of carbon neutral fuels and propulsion systems for military vehicles on land, sea, and air,” the 2021 report stated, pointing out any advancements in technology could also have benefits for civilian sectors, like aviation, too.

What risks does climate change pose to Nato?

There is growing awareness of the challenges that climate change may pose to the world’s security.

Climate change is associated with an increase in extreme weather events like heatwaves, flooding and droughts - which often require humanitarian assistance and can cause mass displacement.

The UN Refugee Agency says that weather events are already displacing about 20 million people a year on average.

For Nato members, extreme weather could also risk the welfare of their military personnel abroad, or the integrity of their operations and equipment.

“Climate change puts our resilience and civil preparedness to the test, affects our planning and the resilience of our military installations and critical infrastructure, and may create harsher conditions for our operations,” the Nato statement said.

Why have they made climate a priority now?

There is increased public awareness about the dangers and risks of climate change and scrutiny of the way governments are responding to it.

The G7 this week also agreed to new climate measures ahead of COP26 - the latest UN Climate Change Conference - being held in Scotland later this year.

Nato Secretary-General Jens Stoltenberg is personally passionate about the subject, having previously served as an environment minister in Norway and as a UN special envoy on climate change. He has been publicly pushing the organisation to prioritise climate change for some time.

“As the planet heats up, our weather becomes wilder, warmer, windier and wetter, putting communities under pressure as sources of food, fresh water and energy are threatened,” he wrote in an opinion piece in September.

“We can see this today in the Sahel region of Africa, where climate change is driving migration. In the Arctic where as the ice melts, geopolitical tensions heat up. Or here in Europe, where record-breaking floods and wildfires increase year on year.”

Monday’s statement also comes after a big ideological shift in the White House, which is Nato’s biggest financial contributor.

Donald Trump was openly sceptical of both US support of Nato and global efforts to combat climate change but his replacement, President Joe Biden, has made both much more central to his policies.

After he took office, President Biden almost immediately reversed a decision to pull the US out of the Paris climate agreement and issued an executive order to tackle the climate crisis at home and abroad, including in the areas of foreign policy and national security.