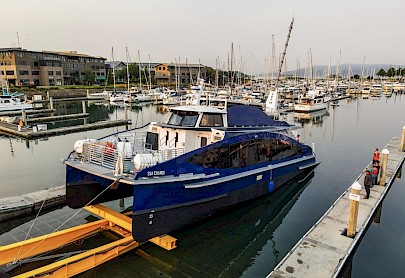 A hydrogen-powered ferry, the first of its kind in the United States, has launched in Bellingham.

Most big boats run on diesel or even dirtier fuels. They belch out climate-wrecking carbon dioxide and lung-damaging pollutants, including particulates and nitrogen and sulfur oxides.

“The really great thing about this process is the only byproduct is hot water,” said Ron Wille with the Bellingham shipbuilder All American Marine. “Being able to put a boat out to sea to operate where it’s going to create zero emissions is certainly revolutionary.”

Any pollution from running the 75-passenger catamaran would come from making its hydrogen fuel in the first place.

All American Marine built the Sea Change for Switch Maritime, an impact investment firm that aims to finance and own a fleet of zero-emission ferries to be leased to ferry agencies.

The Sea Change, with an expected operating speed of 18 miles per hour and a range of more than 300 miles, awaits sea trials on Bellingham Bay and U.S. Coast Guard approval of its novel fuel system. Then it can head down to California for three months of testing and eventual service on San Francisco Bay.

“The boat’s designed to operate for two days before refueling,” Wille said.

Such performance would greatly outshine the battery-powered boats that Washington State Ferries is investing in to gradually reduce the Puget Sound fleet’s carbon footprint: Those have to plug in for recharging after less than a two-hour sailing.

Ian Sterling with Washington State Ferries said the agency, for now, was sticking with the more mature technology of battery-powered boats as it begins to replace its aging diesel-electric fleet.

Sterling said the conversion of the ferry Wenatchee, out of service since an engine fire in April, to battery power could begin this fall. The planned replacement of the entire 21-ferry fleet with nonpolluting boats would take “decades.”

Elias Van Sickle with Switch Maritime said the average ferry in the United States is 27 years old, near the end of the expected lifespan of about 30 years.

“It’s our hope that we can prevent a lot of those ferries from being renewed with diesel ferries,” he said. “We want to prove that these zero-carbon options are viable now — not tomorrow, but now.”

Still, making hydrogen fuel today is anything but a zero-carbon option.

Hydrogen gas is mostly manufactured in an energy-intensive process from natural gas, a fossil fuel that often leaks during drilling and transport and is exceptionally powerful at heating the climate when it does.

The oil and gas industry is promoting “blue hydrogen,” manufactured from fossil fuel but incorporating carbon-capturing technology to reduce its climate impact, as a transitional energy source toward zero-carbon “green hydrogen,” made from water with renewable electricity.

“Basically, any molecule that has an ‘H’ in it, you can crack and get hydrogen out,” Van Sickle said. “It just takes some energy.”

The infrastructure bill passed by the U.S. Senate in August and now being debated by the House of Representatives dedicates $9.5 billion to support hydrogen fuel development.

Funding for the Sea Change included a $3 million grant from the California Air Resources Board. Those funds were collected under California’s cap-and-trade system, which charges big climate polluters and puts the money into clean technologies.

In May, Washington state passed a similar cap-and-trade program, which is expected to cap pollution and fund alternatives by 2023.