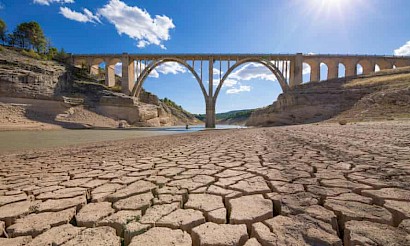 California is about to enter its wet season, when hopes are high for replenishing lowland rains and mountain snows after its three driest years on record. But, for the fourth year in a row, the state could languish in a drought that is having dire effects on its water resources.

Last week, the National Weather Service projected another warm and dry winter for large parts of the state — with drought persisting or getting worse. Now, experts are sounding the alarm about what a fourth consecutive drought year could mean.

“While California has seen a fourth year of drought as recently as 2012-2016 … this will be the first drought that includes shortage issues on the Colorado River,” said Michael Anderson, California’s state climatologist with the Department of Water Resources.

The Colorado River, once considered a guaranteed supply for Southern California, is in crisis, with states set to negotiate possible cutbacks to keep Lake Mead from plummeting to dangerously low levels. It is just 150 feet from “dead pool” level, below which water could not flow downstream.

There is some hope that, even if significant precipitation eludes the southern and central portions of California, the northern part could fare better. Here, the Weather Service is calling for equal chances for above- and below-normal precipitation. However, there is plenty of uncertainty in long-range forecasts, and the season will largely be determined by moisture-rich atmospheric river storms: how strong they are, where they land — and where they don’t.

“We’re playing Russian roulette with the weather, and that’s always a bad idea,” said Felicia Marcus, a fellow at Stanford’s Water in the West program and the former chair of the State Water Resources Control Board. ““When the Sierras have been dry, Southern California has been bailed out by the Colorado. We have been lucky, and our system has been based on that luck.”

Bracing for another dry year

The past three years mark California’s third significant drought period of the 21st century — part of the larger climate change-fueled “megadrought” in the West that is now in its 23rd year, 19 of which have been dry.

October 2019 through September 2022 — the past three water years combined — was California’s driest such period on record. In that time, much of northern California missed more than a year’s worth of precipitation.

The long, hot summer of 2021 was marked by shrinking reservoirs and rapidly intensifying drought, as the state recorded its warmest June through September since 1895.

“2021 was about as bad as it gets — the atmosphere was at an all-time record dryness,” said Jeffrey Mount, a senior fellow at the Public Policy Institute of California’s Water Policy Center.

The 2022 dry season also brought below-normal precipitation in most parts of the state.

Adding another parched year on top of the past three could put the state in uncharted territory.

“If we get another 2021, we will be plowing new ground,” he said. “I don’t want to say we are ready, but we are certainly preparing for it.”

No time to lose

With each passing year, rising temperatures are playing an increasingly significant role in the water supply picture. Over the next 20 years, California could lose 10 percent of its water supply as the atmosphere, soils and plants become ever more thirsty, according to a report from the office of Gov. Gavin Newsom (D).

But farmers, rural towns and ecosystems “will continue to get hammered in heartbreaking ways,” Marcus said.

Hundreds of thousands of acres of California farmland were fallowed this year. Some fish species, like delta smelt, have become functionally extinct, Mount said, meaning they are only found in hatcheries.

“Freshwater ecosystems are really in bad shape because of essentially 10 years of drought,” he said. 2017 and 2019 were the only wet years of the past decade.

Marcus said conservation efforts, like replacing lawns and fixing leaks, are the fastest, cheapest way to save water and should be expanded without delay, regardless of what the coming year brings. Longer-term solutions involve paying farmers to convert land to other uses, and recharging depleted groundwater reserves after intense storms.

“If you just hold back more in the normal times, you’ll have enough to keep fish alive during dry years and still deliver water to farms and cities,” Marcus said.

Rising flood risk, even during droughts

While scientists and planners are most worried about drought, there is also growing concern about extreme precipitation and flooding amid this dry spell. The past decade has seen wet extremes arrive both during and between drought years, and the California Department of Water Resources is also gearing up for potential flooding.

In 2017, the state swung from depleted reservoirs to what UCLA climate scientist Daniel Swain called “essentially the wettest winter in modern history in parts of northern California” at a recent symposium hosted by the Department of Water Resources. A January 2021 atmospheric river produced post-wildfire flooding and mudslides, an event that became one of the nation’s billion-dollar weather disasters. Water year 2022 — Oct. 1, 2021, through Sept. 30 — also saw wild swings between record wet and record dry conditions. And over the broader region, the West has seen recent impactful flooding in Yellowstone National Park, Las Vegas and Death Valley.

“We expect to see a significant increase in both drought and flood severity in a warming climate,” Swain said during his talk at the symposium. “This is in fact exactly what climate models suggest should be emerging right around now and continuing to amplify through the century.”