Mining is a polluting business. Can new tech make it cleaner? 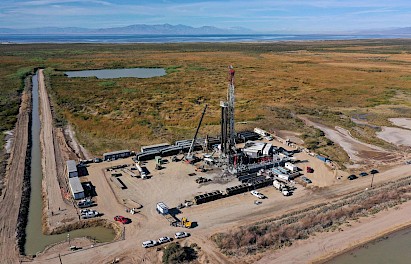 In March, President Joe Biden ordered more federal resources directed toward mining  metals and minerals essential for electric vehicle (EV) batteries, including nickel, cobalt, graphite, and lithium. The presidential directive highlighted one of the most controversial realities at the center of the green energy transition: In order to switch from dirty fossil fuel energy sources to carbon-free renewables and EVs, we need more mining—historically a very polluting business.

Mining involves digging ore out of the ground, hauling it to processing plants, crushing it, separating and refining the metals, and then disposing of the waste. Land is stripped bare to make way for mines and surrounding infrastructure, which often uses considerable amounts of energy and water, produces air pollution, and generates hazardous waste.

But a suite of emerging technologies, from artificial intelligence to carbon capture, could make extraction of the so-called critical minerals and metals required for this energy transition more sustainable than it is today. With demand for these materials expected to surge as the world moves away from fossil fuels and embraces solar, wind, and EVs, there’s growing interest from both the United States government and the private sector in bringing new technologies to market, and quickly. In a recent report on shoring up supply chains in the U.S. for the clean energy transition, the Department of Energy (DOE) emphasized the importance of federal support for “environmentally sustainable and next-generation” extraction methods for critical minerals.

Douglas Hollett, a special advisor at the DOE on critical minerals and materials, says this reflects the agency’s view that critical minerals mining cannot simply be a matter of finding the resources we need and digging them up.

“It’s: Let’s find it, let’s be more effective at it, and let’s end up with the lowest targeted impacts across the value chain, as we look at everything from the exploration phase to extraction, processing, then end of life,” when the products mined materials are use in don’t work anymore, Hollett says.

Long before a mine is built, geologists are sent into the field to drill holes in the ground and search for valuable ore deposits. Exploration is typically the least environmentally damaging stage of mining, but there is still room to improve it. A small but growing number of mineral exploration startups believe they can do so by mining data.

Those startups include KoBold Metals, which uses sophisticated data science tools and artificial intelligence to search for evidence of battery metal deposits in vast amounts of public and historical data, as well as data the company collects during AI-guided field programs. Backed by Bill Gates’ Breakthrough Energy Ventures, KoBold aims to boost discovery rates 20-fold compared with traditional field exploration efforts, reducing the amount of ground that needs to be disturbed to find new ore bodies.

Holly Bridgwater, an exploration geologist at Australian geosciences innovation company Unearthed, feels KoBold’s goal is “achievable” given the mining sector’s very poor hit rate: Today, geologists estimate that less than one in every 100 sites that is surveyed for mining ever actually becomes a mine.

KoBold is carrying out fieldwork this summer at several sites in Canada and Zambia where it has found evidence of nickel and cobalt deposits. But chief technology officer Josh Goldman says the company is “two years or more” away from deciding whether any of them are worth mining. If it can use AI to discover well-hidden but particularly high-quality ores, that could reduce the downstream impacts of mining, Goldman says.

Discovering higher-quality ores could reduce the impact of mining, but any traditional mining process will still have significant environmental effects—particularly on the climate. Hauling, crushing, and processing rock is very energy intensive; the mining sector accounts for 6 percent of the world’s energy demand and 22 percent of global industrial emissions. While many mining companies have begun purchasing renewable electricity and some are experimenting with alternative transportation like hydrogen-powered trucks, the sector still largely relies on fossil fuels to power its heavy machinery and energy-hungry facilities.

For at least one critical mineral, lithium, there may be a cleaner path forward. Used as an energy carrier in the batteries powering everything from smartphones to EVs, global demand for lithium could rise more than 40-fold by 2040 if the world shifts rapidly from gas-powered vehicles to electric ones.

For decades, researchers have explored the possibility of extracting lithium from geothermal brines—hot, mineral-rich waters that some geothermal power plants bring to the surface from deep in the Earth to produce energy. The idea, says Michael Whittaker, a research scientist with the Lithium Resource Research and Innovation Center at the DOE’s Lawrence Berkeley National Laboratory, is to power the entire lithium extraction process using carbon-free geothermal energy. Removing lithium from geothermal brines also has the potential to use far less water than the enormous, open-air evaporation ponds used to concentrate lithium from the shallower mineral-rich waters lurking beneath salt flats in Argentina and Chile.

Big hurdles must be overcome before large amounts of lithium can be obtained through the geothermal process. Whittaker says the lithium content of geothermal brines is “relatively low” compared with their South American counterparts. In geothermal brines, other elements, like sodium and potassium, tend to be present in much higher concentrations than lithium, interfering with its extraction. Currently, Whittaker says, geothermal plant operators bring hot brine to the surface and inject the spent brine back underground much faster than lithium can be extracted, meaning they’re not able to get as much value out of the process as they could.

Despite technical challenges and commercial setbacks, the DOE and private sector partners see promise in the geothermal method. Rough estimates based on measurements of brine chemistry and volume suggest that an enormous amount of lithium is lurking beneath a hyper-salty lake in Southern California known as the Salton Sea.

“No matter how you slice it, there’s a lot of lithium beneath the Salton Sea that could potentially supply the U.S. demand for batteries for EVs for the rest of the decade,” Whittaker says. “And probably many decades thereafter.”

Some researchers and entrepreneurs believe the resources needed for the energy transition can be found in the waste from aging and abandoned mines.

These include Nth Cycle, a startup that has developed technology for extracting battery metals like cobalt, nickel, and manganese from mine waste, low-grade ores, and end-of-life technology including EV batteries. Its core technology, called “electro-extraction,” uses none of the harsh chemicals or high-heat furnaces often found in mining and recycling operations—only electricity, which can come from renewable sources. Metals are selectively removed from crushed, liquified rock by running that mine waste through a series of electrified, carbon-based filters that founder and CEO Megan O’Connor likens to giant Brita water filters.

O’Connor, who optimized the metals extraction process while completing her doctorate and before founding Nth Cycle in 2017, says the company’s 300-square-foot filtration systems can be transported to mining sites. There, company data show, they can wring up to 95 percent of the remaining metals out of material considered to be waste. The company, which raised $12.5 million in a funding round in February 2022, plans to announce its first mining customers later this year.

For nearly a decade, the DOE has been investigating whether rare earth elements, a group of chemically reactive, metallic elements used in offshore wind turbines, EV motors, and semiconductors, can be harvested from coal mine refuse, such as coal ash. In February, the department announced plans to stand up a $140 million extraction and separation facility to demonstrate the idea at a commercial scale. Hollett called the project an “exciting” opportunity to see whether the hundreds of coal waste sites badly in need of cleanup can also provide something of value.

“Whether it’s a legacy ash pond or a stubbornly persistent acid mine drainage situation, it goes in the direction of being able to address resources from existing legacy materials,” Hollett says. “But there’s a remediation theme here as well.”

After miners have extracted everything of value from rocks, the often-toxic waste, called tailings, are usually buried on-site. But if the mining operation took place on certain kinds of rocks—so-called ultramafic rocks, which have a high magnesium content and high alkalinity—those tailings have the potential to absorb carbon from the air.

“What happens in the ultramafic mine tailings we work on is that they consume CO2 from the atmosphere, and they put that CO2 in a solid mineral form,” says Greg Dipple, a professor of geology at the University of British Columbia. “These are the most durable and permanent form of carbon storage.”

Dipple’s research has shown that ultramafic mine tailings can sequester tens of thousands of tons of CO2 a year on their own. But he says that process can be enhanced by a factor of three or four with some relatively simple, low-cost interventions, like churning the tailings to expose fresh rock to the air and adding or removing water from this powdery waste. Coupled with renewable power usage and hydrogen or electric vehicles, Dipple believes this form of carbon capture has the potential to make certain mines carbon-negative—meaning they draw more CO2 out of the air than they produce.

In 2021, Dipple and several colleagues founded Carbin Minerals, a startup aimed at commercializing their technology. Carbin Minerals, which is focused on partnering with nickel miners working in ultramafic rocks, is currently negotiating partnership agreements with multiple mines. In April, the startup was named one of 15 milestone winners in Elon Musk’s XPRIZE Carbon Removal competition. All of the winning teams had to demonstrate a pathway for their technology to pull billions of tons of CO2 out of the air. Dipple says the $1 million prize Carbin Minerals received will help accelerate early-stage research into using its technology on a broader range of rocks.

“Together with the anticipated growth in the supply chain required for critical and battery metals, that’s the pathway to this technique potentially working at a scale of billions of tons a year,” Dipple says.

‘As sustainable as we can be’

While new technologies offer hope that the mines of the future can be more environmentally sustainable, many are still years away from being applied at a large commercial scale—if that proves possible at all. And cleaner mining approaches are only one piece of the puzzle: We also need to do a much better job of recycling metals from dead solar panels, EV batteries, and other technologies to reduce the need for future mining. Finally, stricter laws and regulations are required to ensure that where mining is expanded to meet rising metals demand, it’s done with the consent of local communities and in a way that directly benefits those communities.

While the impacts of mining will never be zero, Bridgwater says the industry can do much better—and it has a responsibility to try.