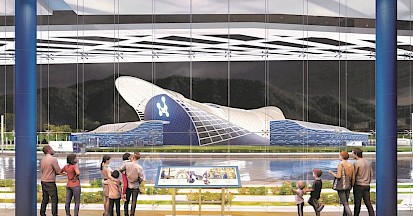 A much-vaunted first wave of mini nuclear power stations may produce more radioactive waste than traditional large-scale ones when generating the same amount of power.

Small modular reactors (SMRs) have been mooted by their developers and proponents as a cheaper and faster way to build new nuclear power capacity, with UK prime minister Boris Johnson claiming they could be generating electricity by 2030. The US government has provided financial support to the firm NuScale Power to develop its version of the technology.

But to date there has been little independent assessment of how the radioactive waste produced by SMRs would compare with that from their large-scale peers.

Lindsay Krall at Stanford University in California and her colleagues used data NuScale Power has shared publicly with US authorities to assess the technology, and extrapolated to model the waste from three different SMR technologies. They compared the SMR technology with a conventional 1.1 gigawatt nuclear reactor, roughly a third of the capacity of a new nuclear plant being built in south-west England.

They have found that SMRs could increase the volume of short-lived low and intermediate level waste – the two lowest of three categories – by up to 35 times compared to a large conventional reactor, when looking at waste produced per unit of electricity generated.  For the long-lived equivalent waste, SMRs would produce up to 30 times more and for spent nuclear fuel, up to 5 times more. The variation in these figures reflects expected variation in the SMR designs now being developed.

“The information right now being put out by reactor developers can be seen as promotional,” says Krall. “SMR performed worse on nearly all of our metrics compared to standard commercial reactors.” Those metrics included the heat from radioactive decay and the radiochemistry of the spent fuel.

The study suggests that SMRs produce higher volumes and greater complexity of waste because they are naturally less efficient. Nuclear power generation involves a nuclear chain reaction, in which one single nuclear reaction in the reactor core creates neutrons that then go on to cause an average of one or more subsequent nuclear reactions. However, according to Krall’s team, SMRs leak more neutrons out of their core than a larger reactor, meaning they cannot maintain the self-sustaining reaction for as long. Even a small difference in neutron leakage results in a substantial impact on the composition of the waste, says Krall.

The UK government has provided funding for Rolls-Royce SMR to advance its own version of the technology. This design was not considered in the new study, but a company spokesperson said Rolls-Royce SMR would be submitting estimates on waste volumes as part of its years-long journey through the UK’s nuclear regulatory approval process, which started in April. The Rolls-Royce SMR design “includes some technical innovations that reduce waste arisings”, said the spokesperson.

Very few countries have made progress on plans for long-term facilities to store their nuclear waste underground, with Finland and Sweden two of the exceptions. “We need to get more serious about practically managing their [SMRs’] nuclear waste,” says Krall.