Many overheated forests may soon release more carbon than they absorb 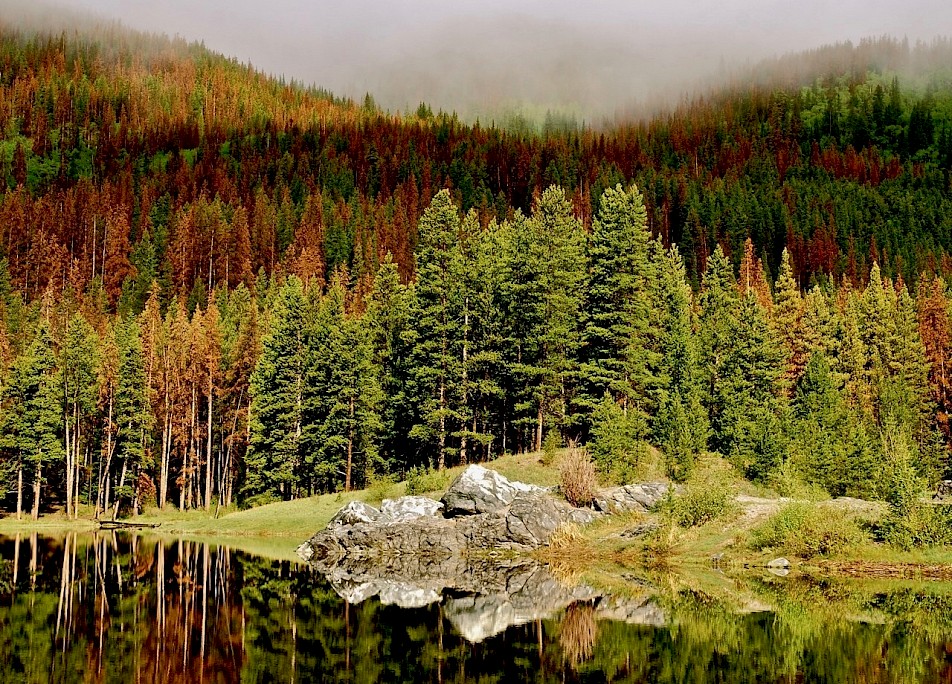 The last decades have been filled with dire warning signs from forests. Global warming has contributed to thinning canopies in European forests and to sudden die-offs of aspen trees in Colorado, as well as insect outbreaks that are killing trees around the world. In many places, forests are not growing back.

New research shows that Earth’s overheated climate will alter forests at a global scale even more fundamentally, by flipping a critical greenhouse gas switch in the next few decades. The study suggests that, by 2040, forests will take up only half as much carbon dioxide from the atmosphere as they do now, if global temperatures keep rising at the present pace.

The study, published Wednesday in Science Advances, analyzed more than 20 years of data from about 250 sites that measure the transfer of carbon dioxide between land and plants and the atmosphere—the way the planet breathes. Forests and the rest of Earth’s land-based ecosystems take up about 30 percent of human carbon emissions, so any big change in that process is important.

The data show a clear temperature limit, above which trees start to exhale more CO2 than they can take in through photosynthesis, said co-author Christopher Schwalm, an ecologist and earth system modeler at the Woodwell Climate Research Center. The findings mark a tipping point, of sorts, at which “the land system will act to accelerate climate change rather than slow it down,” Schwalm said.

The study found that, while trees at different latitudes have different temperature thresholds, for many forest types that are important for absorbing carbon dioxide, photosynthesis peaks at 18 degrees Celsius (64.4 degrees Fahrenheit). But the data showed no limits on the amount of carbon dioxide they can release.

Plants typically absorb CO2 and release oxygen, but they also “exhale” CO2, particularly at night, when photosynthesis ceases due to the lack of sunlight. Forests also emit more CO2 when they are stressed by increasing temperatures.

Continued warming will reduce photosynthesis and exponentially increase the amount of CO2 trees release through respiration as they try to breathe enough to keep cool. That will turn many vegetated landscapes from carbon sinks into carbon sources within 20 to 30 years, accelerating climate change, the study concluded. The study also showed no signs that forests were able to acclimatize to the rising temperatures of the last two decades.

“For my money, the results are conservative, because forest die-offs are not factored into this,” Schwalm said of the potential for dying trees to increase CO2 production even more as they decay, driving additional global warming.

The findings were not totally unexpected, he added. Research going back decades, including some of his own work in Canadian forests, shows, “Temperatures really drive the bus.”

“Seeing such a strong temperature signal globally did not surprise me,” he said. “What I was surprised by is that it would happen so soon, maybe in 15 to 25 years, and not at the end of the century.”

‘We’re in Bigger Trouble Than We Thought’

The research shows how intensely global warming is affecting ecosystems, said co-author Louis Schipper, who studies soils at the molecular level at the University of Waikato, in Hamilton, New Zealand.

Global warming is shifting the climate so fast that there will be no stable “new normal” for the foreseeable future, Schipper said. And if forests start exhaling more CO2 than they take up, “we’re in bigger trouble than we thought,” he added.

“The time that ecosystems have bought us, when we should have been doing something about reducing greenhouse gas emissions, we’ve wasted it,” Schipper said. “All our figures show, we need to stop it now. How bad do we want it to get? That’s our challenge and choice.”

Schipper said he connected with lead author Katharyn Duffy, an earth system scientist at Northern Arizona University, at a science conference a few years ago, where they compared notes about plant physiology.

“The stuff she was showing was remarkable,” he said. “She looked at CO2 changes in response to the different variables, like moisture, temperature and light, and developed a technique to pull out the temperature responsiveness.” That showed how temperature limits photosynthesis, but not respiration of CO2, he added.

For the study, Duffy used that technique to analyze photosynthesis and respiration rates from the global Fluxnet database and found that photosynthesis dropped sharply above the temperature thresholds in nearly every type of land-based ecosystem, even after taking into account other effects such as water and sunlight. In most temperate forests, the threshold is 18 degrees Celsius (64.4 degrees Fahrenheit), in tropical forests, 28 degrees Celsius (82.4 degrees Fahrenheit).

“The Earth,” Duffy said, “has a steadily growing fever, and much like the human body, we know every biological process has a range of temperatures at which it performs optimally, and ones above which function deteriorates.” The results show that limit for plants, she said.

The results are “truly scary, and not just for forests,” Schipper said, “especially if you intersect that graph with food production areas in regions that don’t have the wealth or infrastructure to adapt.”

Through the 1980s and even the 1990s, many scientists thought forests might be more resilient than they’ve turned out to be. Climate models suggested increased CO2 would increase photosynthesis and global plant growth, which was sometimes described as the “greening of the planet.” But the new study clearly shows there are limits, said United States Geological Survey ecologist Craig Allen, who has been studying forests for 41 years from a field research station in northern New Mexico. Allen was not involved in the study.

“We can see, in the last 20 years, we have reached temperature plateaus where photosynthesis stops,” he said. “What I find compelling about it is, 20 years of observational data shows that about 10 percent of the planet’s surface was crossing these thresholds during the warmest three-month periods of the year.”

The new study suggests that figure will increase, with about 50 percent of the terrestrial biosphere reaching temperatures above the threshold that limits photosynthesis by mid-century. Some of the most carbon-rich ecosystems, like tropical rainforests in the Amazon and Southeast Asia, and Russia and Canada’s boreal forests, will be among the first to hit that tipping point, the study reported.

Extreme events, like hot extended droughts, are becoming more frequent, “but those are going to be normal and the extremes are going to get more extreme,” Allen said. “The forests of the planet are telling us, and individual trees are telling us what’s too much. The planet is in trouble and we’re not speaking loud enough.”

The imminent and far-reaching changes to forests reinforce the need to save what can be saved and to determine what types of forest management might be most effective to slow the decline, said University of Arizona forest researcher Jason Field, lead author of another recent study that outlined forest management options in response to global warming.

With many forests at risk from megadrought conditions, “Forest managers will likely need to consider novel, higher-intensity management practices at finer scales to help increase forest resistance,” Field said. That study was published December 2020 in Frontiers in Forests and Global Change.

At this point, forest management options for hotter and longer droughts caused by global warming are “barely being integrated into forest management,” he said. “This is our attempt to get the conversation rolling. If we’re going into megadrought, we need to think smaller and more effectively.”

It may come down to looking at options for saving valuable, individual stands of trees,  and protecting genetically distinct and more resilient species. It could also be important to conserve corridors and patches of woodland to reduce the distance seeds must travel to enable forests of the future to spread or reconnect under more favorable climate conditions, he explained.

The new research on forest carbon uptake is really an enormous challenge to think about, he said, because we don’t yet understand how to manage forests under hotter droughts.

“We think a lot of these areas are going to go down, so where can we save some of it?” he asked.

The new findings represent a tipping point because they suggest a dangerous feedback loop, said Phil Duffy, director of the Woodwell Climate Research Center, who was not involved in the study.

“In this case the warming causes a change in net uptake of carbon by vegetation, which results in more CO2 in the atmosphere, which reinforces the warming, and so on,” he said.

The findings challenge the possibility of limiting warming to 1.5 or 2 degrees Celsius.