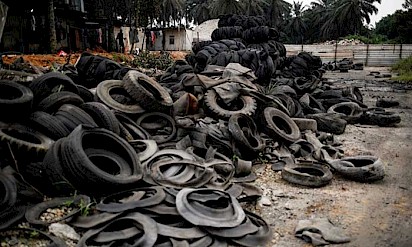 The most recent incident occurred in Jalan Kluang, where an operator had gathered tires for an illegal pyrolysis plant. He pretended to be Datuk (so called Malaysian knighthood), hoping to utilize the influence of the title to get the authorities to drop the charges or delay them.

When the 70-year-old man was discovered to be conducting business illegally, the authorities demanded that he be arrested, according to Mohd Rashdan Topa, the deputy director of the Department of Environment (DOE) in Johor.

The largest seizure for such a case this year, according to Mohd Rashdan Topa, involved 300 tons of used tires that were piled up in a palm oil plantation with an area of roughly 0.8 hectares.

Rashdan Topa stated, “The businessman claimed that he helped dispose of used tires but the fact is that his actions have violated the law according to Section 34A of the Environmental Quality Act 1974”.

Additionally, it was discovered that the entrepreneur employed four illegal immigrants. DOE will notify the appropriate authorities and departments, such as the Immigration Department, the Kluang Land Office, the Kluang Municipal Council, the Ministry of Health, and the Police, about any other offenses the operator may have committed.