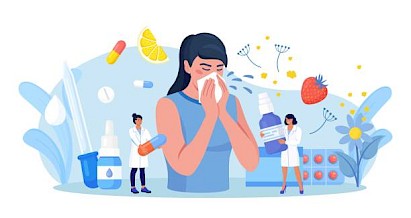 According to new research from Proceedings of the National Academy of Sciences (PNAS) regarding climate change and pollen seasons, there has been a significant increase of pollen in the air in recent years.

The study measured pollen trends across North America from 1990 to 2018, and not only found increases in pollen concentrations in the air, but also longer pollen seasons.

The study found that the largest and most consistent increases were observed in Texas and the midwestern U.S.

The results indicate that human-caused climate change has worsened North American pollen seasons, and that these pollen trends are likely to further exacerbate impacts on our respiratory health in the future.

“Human-caused climate change could impact respiratory health, including asthma and allergies, through temperature-driven increases in airborne pollen, but the long-term continental pollen trends and role of climate change in pollen patterns are not well-understood,” the study states.

Human-caused climate change is expected to have widespread negative impacts on public health, as the study shows that the consequences not only include major respiratory health issues, such as worsened allergies and asthma, but also viral infections, affecting “school performance and downstream economic impacts, and emergency room visits.”

The long-term increases in pollen season length indicate that exposure times to allergenic pollen, as well as amount of pollen, have increased significantly for North America in recent decades.

Likewise, long-term data show significant increases in allergen sensitivities across all age groups in the U.S., with trends of increasing pollen sensitization in childhood leading to increased adolescents and adults with allergic asthma.