Maine will make companies pay for recycling. Here's how it works 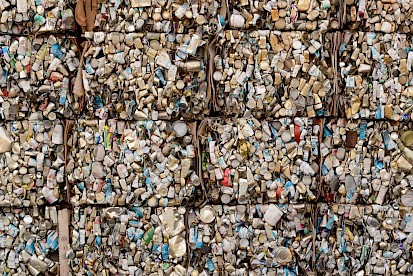 Recycling, that feel-good moment when people put their paper and plastic in special bins, was a headache for municipal governments even in good times. And, only a small amount was actually getting recycled.

Then, five years ago, China stopped buying most of America’s recycling, and dozens of cities across the United States suspended or weakened their recycling programs.

Now, Maine has implemented a new law that could transform the way packaging is recycled by requiring manufacturers, rather than taxpayers, to cover the cost. Nearly a dozen states have been considering similar regulations and Oregon is about to sign its own version in coming weeks.

Maine’s law “is transformative,” said Sarah Nichols, who leads the sustainability program at the Natural Resources Council of Maine. More fundamentally, “It’s going to be the difference between having a recycling program or not.”

The recycling market is a commodities market and can be volatile. And, recycling has become extremely expensive for municipal governments. The idea behind the Maine and Oregon laws is that, with sufficient funding, more of what gets thrown away could be recycled instead of dumped in landfills or burned in incinerators. In other countries with such laws, that has proved to be the case.

Essentially, these programs work by charging producers a fee based on a number of factors, including the tonnage of packaging they put on the market. Those fees are typically paid into a producer responsibility organization, a nonprofit group contracted and audited by the state. It reimburses municipal governments for their recycling operations with the fees collected from producers.

Nearly all European Union member states, as well as Japan, South Korea and five Canadian provinces, have laws like these and they have seen their recycling rates soar and their collection programs remain resilient, even in the face of a collapse in the global recycling market caused in part by China’s decision in 2017 to stop importing other nations’ recyclables.

Ireland’s recycling rate for plastics and paper products, for instance, rose from 19 percent in 2000 to 65 percent in 2017. Nearly every E.U. country with such programs has a recycling rate between 60 and 80 percent, according to an analysis by the Product Stewardship Institute. In 2018, the most recent year for which data is available, America’s recycling rate was 32 percent, a decline from a few years earlier.

Nevertheless, laws like these have faced opposition from manufacturers, packaging-industry groups and retailers.

In Maine, the packaging industry supported a competing bill that would have given producers more oversight of the program. It also would have exempted packaging for a range of pharmaceutical products and hazardous substances, including paint thinners, antifreeze and household cleaning products.

One of the industry’s main objections to the bill that ultimately passed was that it gave the government too much authority and left the industry with not enough voice in the process. “No one knows packaging better than our members,” said Dan Felton, the executive director of the packaging industry group Ameripen, in a statement following the passage of the law. “Funds should be managed by industry.”

Recycling is important for environmental reasons as well as in the fight against climate change. There are concerns that a growing market for plastics could drive demand for oil, contributing to the release of greenhouse gas emissions precisely at a time when the world needs to drastically cut emissions. By 2050, the plastics industry is expected to consume 20 percent of all the oil produced.

The oil industry, concerned about declining demand as the world moves toward electric cars and away from fossil fuels, has pivoted toward making more plastic — spending more than $200 billion on chemical and plastic manufacturing plants in the United States. Vast amounts of plastic waste are exported to Africa and South Asia, where they often end up in dumps or in waterways and oceans. In the ocean, they can break down into microplastics that harm wildlife.

China’s decision in 2017 precipitated a crisis in recycling. Without China as a market to import all that waste, recycling costs soared in the United States. Dozens of cities suspended their recycling programs or turned to landfilling and burning the recyclables they collected. In Oregon alone, 44 cities and 12 counties had to stop collecting certain plastics like polypropylene.

To cope, state legislators and environmental protection agencies began looking for solutions. A number of them, including Maine and Oregon, settled on what is known as an extended producer responsibility program, or E.P.R., for packaging products.

In Maine, packaging products covered by the law make up as much as 40 percent of the waste stream.

In both states, one important benefit of the program is that it will make recycling more uniform statewide. Today, recycling is a patchwork, with variations between cities about what can be thrown in the recycling bin.

These programs exist on a spectrum from producer-run and producer-controlled, to government-run. In Maine, the government is taking the lead, having the final say on how the program will be run, including setting the fees. In Oregon, the producer responsibility organization is expected to involve manufacturers to a larger degree, including them on an advisory council.

Built into both laws is an incentive for companies to reconsider the design and materials used in their packaging. A number of popular consumer products are hard to recycle, like disposable coffee cups — they’re made of a paper base, but with a plastic coating inside, and another plastic lid, as well as possibly a cardboard sleeve.

Both Maine and Oregon are considering charging higher rates for packaging that is hard to recycle and therefore doesn’t have a recycling market or products that contain certain toxic chemicals, such as PFAS.

For many companies, this might require a shift in mind-set.

Scott Cassel, the founder of the Product Stewardship Institute and the former director of waste policy in Massachusetts, described the effect of one dairy company’s decision to change from a clear plastic milk bottle to an opaque white bottle. The opaque bottles were costlier to recycle, so the switch cost the government more money. “The choice of their container really matters,” Mr. Cassel said. “The producer of that product had their own reasons, but they didn’t consider the cost of the material to the recycling market.”

Thirty-three states currently have extended producer responsibility laws on the books, but they are far more narrow. Typically they focus only on specific products, like used mattresses and tubs of paint.

In those narrow applications, they have proven effective. Connecticut’s mattress, paint, electronic and thermostat E.P.R. programs have diverted more than 26 million pounds of waste since 2008, according to an analysis by the Product Stewardship Institute.

A number of the packaging E.P.R. programs introduced in statehouses this year faced significant opposition from the packaging and retail industries, including the one in Maine. One of the industries’ main contentions was that the laws would lead to higher grocery prices for consumers. A study by the Oregon Department of Environmental Quality of Canadian E.P.R. programs found that consumer product prices had increased by only $0.0056 per item.

Some major consumer-product companies have begun voicing support for policies like these. In 2016, Greenpeace obtained internal documents from Coca-Cola Europe, which depicted extended producer responsibility as a policy that the company was fighting. In a sign of change, this spring, more than 100 multinational companies, including Coca-Cola, Unilever, and Walmart, signed a pledge committing to support E.P.R. policies.