Lithium costs a lot of money—so why aren’t we recycling lithium batteries? 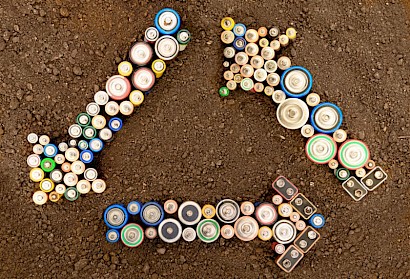 Electric vehicles, power tools, smartwatches—Lithium-ion batteries are everywhere now. However, the materials to make them are finite, and sourcing them has environmental, humanitarian, and economic implications. Recycling is key to addressing those, but a recent study shows most Lithium-ion batteries never get recycled.

Lithium and several other metals that make up these batteries are incredibly valuable. The cost of raw lithium is roughly seven times what you’d pay for the same weight in lead, but unlike lithium batteries, almost all lead-acid batteries get recycled. So there’s something beyond pure economics at play.

It turns out that there are good reasons why lithium battery recycling hasn’t happened yet. But some companies expect to change that, which is a good thing since recycling lithium batteries will be an essential part of the renewable energy transition.

How extreme is the disparity between lithium and lead batteries? In 2021, the average price of one metric ton of battery-grade lithium carbonate was $17,000 compared to $2,425 for lead North American markets, and raw materials now account for over half of battery cost, according to a 2021 report by the International Energy Agency (IEA).

The imbalance of recycling is counterintuitive in terms of fresh material supply as well. Global sources of lithium amount to 89 million tons, most of which originate in South America, according to a recent United States Geological Survey report. In contrast, the global lead supply at 2 billion tons was 22 times higher than lithium.

Despite the smaller supply of lithium, a study earlier this year in the Journal of the Indian Institute of Science found that less than 1 percent of Lithium-ion batteries get recycled in the US and EU compared to 99 percent of lead-acid batteries, which are most often used in gas vehicles and power grids. According to the study, recycling challenges range from the constantly evolving battery technology to costly shipping of dangerous materials to inadequate government regulation.

Emma Nehrenheim, chief environmental officer at Northvolt batteries, said everyone expected lead to be phased out by now, but she attributes its continued economic success to high recycling rates.

“Every time you buy a battery for your car, you have to give the whole battery back, and then it goes into the recycling chain,” said Nikhil Gupta, lead author of the study and a professor of mechanical engineering at the Tandon School of Engineering at New York University. This hasn’t worked for lithium batteries, partly because so many formats exist. “These batteries are all over the place in different sizes,” he said. A related challenge is that the technology for lithium batteries changes rapidly — every one to two years, he said.

But overcoming these recycling challenges is a must. Lithium-based batteries hold more energy in a smaller package when compared to lead-acid batteries. They’re crucial for decarbonizing transportation and enabling a widespread transition to renewable energy by helping ensure a predictable supply of power from otherwise intermittent wind and solar. Achieving these transitions on a global scale is a massive undertaking. “That would require us to make major advancements in battery technology,” Gupta said. “There’s no doubt about it.”

Accordingly, global lithium consumption has increased 33 percent since 2020. If renewable energy goals sufficient to stop climate change are to be reached, then the demand for lithium is expected to grow 43-fold, according to the IEA. “What happens if we don’t have a lithium supply?” Gupta said. “There’s no good answer yet.”

Lithium isn’t the only material that may limit the use of these batteries. The anode and cathode of the batteries contain materials that are also subject to potential supply crunches, like cobalt and nickel. So, recycling could help solve multiple supply issues. “If you want to build a battery, an old battery contains exactly the same components,” Nehrenheim said.

The USGS report noted that about two dozen companies in North America and Europe are recycling lithium batteries or have plans to—up from a single facility just a few years ago.

For the few facilities that can recover materials from lithium-ion batteries, traditional processes aren’t efficient enough to recover high-grade lithium to be used in remaking batteries. The pyrometallurgy method, for example, is easy to scale and works with any battery format, but it involves an energy-intensive process using high heat to incinerate the battery. While the ash will contain useful materials, pyrometallurgy can produce toxic fumes and limits the recovery of other valuable components. Other methods involve shredding the battery and then extracting materials using lengthy, complex chemical processes that vary depending on the battery technology used. 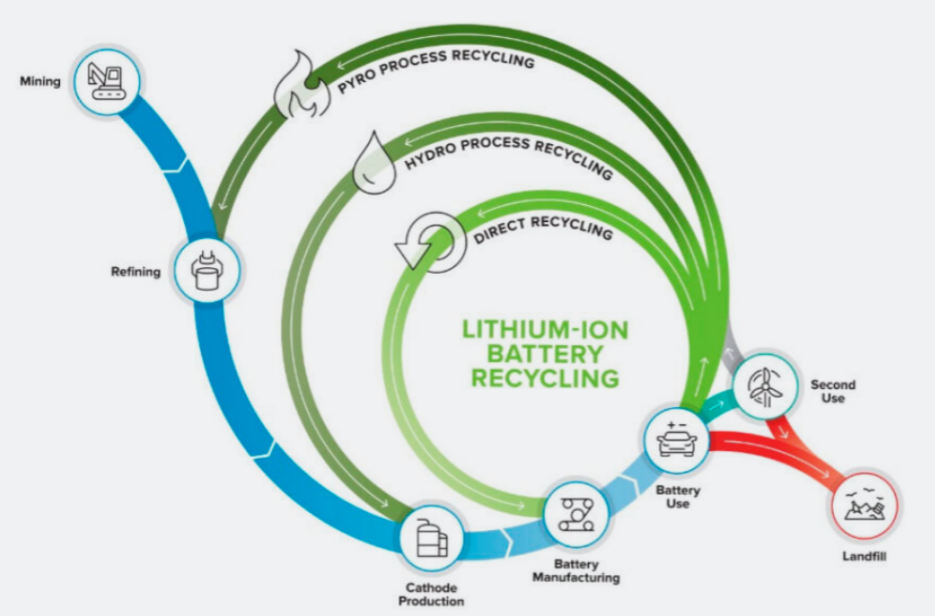 Direct recycling is an alternative that basically deconstructs the battery and retains the cathode and anode materials to be reconditioned. This method is in its early days, but it has the potential to be cheaper, safer, and more efficient. The process is made difficult by the need to manually break down a huge range of battery formats. A lithium battery pack contains modules that contain cells, and these cells are where the valuable metals are found. Manually getting to these cells is doable but tedious, and automation is needed to process high volumes.

“It’s a bit more challenging to recycle these kinds of materials,” said Northvolt’s Nehrenheim. The Swedish battery manufacturer has multiple programs through an initiative it’s calling Revolt, including a pilot recycling plant that has been operating since late 2020. They are also in the process of developing Revolt Ett—Swedish for “one”—a full-scale recycling plant aiming for the capacity to recycle 125,000 tons of batteries per year, beginning in 2023.

Like most companies, Northvolt’s process is not direct recycling. However, it dismantles the batteries down to the level of modules before beginning any crushing, shredding, or chemical processes. Last fall, Northvolt produced its first battery from using only recycled material. Northvolt has a robot it is fine-tuning at its pilot facility, and the company hopes to heavily automate most of the dismantling process in the future.

Part of the company’s plan for recycling success also involves calibration of the market, Nehrenheim said, to make sure that recycling is systemically integrated, which is supported by clear regulation. “If you build a recycling plant under UN or Scandinavian or European regulation right now, it’s highly regulated,” she said. “You can get great support from the authorities and how to define a safe operation.”

In 2015, Ryan Melsert went to work for Tesla just before development began on its Gigafactory outside of Reno, Nevada. While there, he and a small team worked to design the building, batteries, equipment, and every other element needed for the facility. Now, as CEO of American Battery Technology Company (ABTC), Melsert and his crew are working to do the opposite. “It really gave the fundamental understanding and learning of all of those individual manufacturing steps that is hard to gain otherwise.”

Their experience developing a lithium-ion car battery from start to finish, he said, helped him and his team intimately understand what would be needed to reverse the process to recycle effectively. A defect or end-of-life battery, he said, is just another resource that contains valuable metals.

“Much of recycling technologies today take the entire battery and simply drop it in a furnace and melt it or they drop it in a shredder and grind it,” he said. “What we do is back out and reverse order many of the manufacturing steps that we designed at Gigafactory to really remove the material in a much more strategic fashion to both lower costs and to increase recovery rates.” This automated “demanufacturing” makes the actual chemical extraction easier, he said.

Their two-part recycling process involves this disassembly, followed by a hydrometallurgical, or chemical, process. ABTC is currently building its first facility in northern Nevada, which has the potential, it says, to recover battery-grade materials in under three hours. The company expects it to be completed by the end of 2022 and have the ability to intake 20,000 metric tons of recyclable material per year. If achieved, that would amount to about a fifth of the total weight of raw lithium produced in 2021.

Despite rapid technology changes, the longer life span of lithium batteries provides room for recycling facilities to adjust. Most lithium batteries are in use for years before needing replacement, which can help companies like ABTC prepare for the next iteration in recycling. “There’s that latency,” Melsert said. “We’re able to see what’s in the field long before it comes back.”

One way to make recycling ubiquitous is to get manufacturers to think about recyclability from the start. The idea has gained traction in recent years: manufacturers and recyclers work together to profit while creating as little waste as possible. In a linear economy, when a battery runs out of charge, it ends up in a landfill. In a circular economy, instead of going to waste, batteries start their life over as raw materials and go right back into the manufacturing chain. “Once these metals are mined once, you can essentially keep them in that loop indefinitely,” Melsert said. This means, in theory, all the companies involved could profit indefinitely while wasting little or no material.

This would ensure a consistent supply, reduce costs and possibly lower the environmental footprint compared to mining. Melsert thinks to achieve this goal, it’s key to develop partnerships at all points in the supply chain, from refineries to vehicle manufacturers to battery recyclers. To help this effort, ABTC won a $2 million contract last year from the United States Advanced Battery Consortium—made up of General Motors, Ford, Stellantis, and the Department of Energy. The award provides more than two years of funding to demonstrate that producing batteries from recycled materials is better for the environment and the economy. It also means ABTC will be working with a cathode producer and battery recycler, as well as a cell technology developer.

Innovation for Lithium-ion batteries is still in its adolescence, with major developments happening in little more than the last decade, compared to half a century ago for lead-acid. While ABTC has an ambitious time frame, Gupta said it could be another decade before solutions truly meet the needed scale. Still, he is optimistic. “As a scientist, I would say we will always find solutions.”