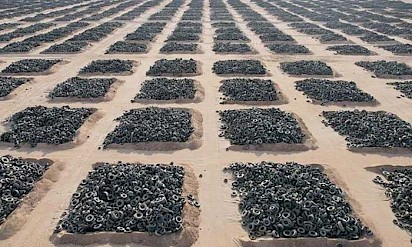 There was an urgent need to deal with the estimated 42 million tires that had been dumped in the desert, and the original dump site had been designated for a new housing development.

There was an intense competition to win the contract to recycle the tires, and EPSCO was one of the winners. Employees sort and shred used tires at a facility managed by the recycling company EPSCO Global General Trading before pressing the particles into floor tiles.

According to EPSCO partner and CEO Alaa Hassan, “the factory is helping society by cleaning up the dumped old tires and turning them into consumer products.” He also noted that they ship products to Asia and the nearby Gulf countries.

According to the company, the EPSCO plant, which started operating in January 2021, has the capacity to recycle up to 3 million tires annually. Due to their size and potential chemical release, scrap tires are a significant environmental issue on a global scale.

According to figures from the Central Statistical Bureau, Kuwait, an OPEC member with a population of roughly 4.5 million, had about 2.4 million vehicles in 2019 compared to 1.5 million in 2010.

Al-Salmi is planned by the government as a center for tire recycling, with more plants to follow. According to the Al Khair Group’s CEO Hammoud Al-Marri, more than half of all the tires were carried to the new location using up to 500 trucks per day, and the company intends to establish a plant to pyrolyze the tires.