It’s Too Late To Avoid A Major Oil Supply Crisis

There are a number of observable trends in oil supplies and by extension prices, presently. I am going to discuss one of them in this article. A lack of capital investment in finding new supplies of oil and gas. A favorite analogy of mine comes to mind, the ship is nearing the dock. In nautical parlance that means the time for course corrections is at an end. So we shall see if that is the case for oil. The massive “ship” that is world oil demand is on an unalterable collision with supplies that will have profound implications for consumers. This key metric reveals what the future is likely to hold for our energy security as the world continues to recover from the virus to those who will listen. The level of drilling and by extension capital investment is insufficient and has been for a number of years to sustain oil production at current levels. It’s no secret that even with the lower break-even costs for new projects thanks to cost-cutting by the industry the last few years, oil extraction is a capital-intensive business. The chart below from WoodMac, an energy consultancy, shows just how severe the decline in capex has been. 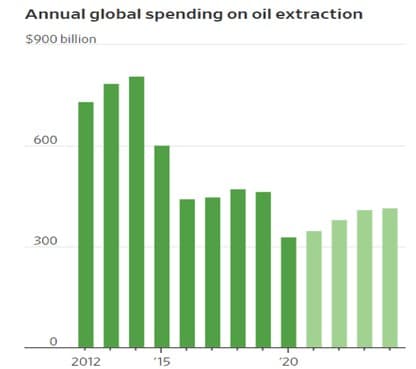 The message to oil and gas companies has been pretty clear from the market, investment funds like Blackrock seeking green “purity” in the allocation of financing of new energy sources, and government edicts mandating carbon intensity reduction across the entire swath of society, and a transformation to renewable energy, that new supplies of oil and gas are not wanted.

These companies seem to have gotten the message, loud and clear. The super-major cohort formed by Shell (-3.98%), (NYSE:RDS.A), (NYSE:RDS.B), ExxonMobil (-1.06%), (NYSE:XOM), BP (-2.69%), (NYSE:BP), TotalEnergies (-0.60%), (NYSE:TOT), all prime targets of the anti-oil movement, have reduced their capital allocation toward petroleum, exited businesses or converted petroleum assets like refineries to renewables, and sold assets that a few years ago might have contributed to oil and gas inventories.

Just a couple of weeks ago, Shell was told to speed up its decarbonization by a Dutch court, and just this week the company took steps in that direction. Shell’s decision to exit its Permian shale position is monumental and will change the character of the company over time. We will have further discussion on this in the future.

In this article, we will discuss what the lack of capex mentioned above might portend for consumers in the not too distant future.

Lack of capital will reduce the supply of oil

There is going to be less oil produced in the future. That comment might not seem too prophetic given the points we’ve covered so far. The fact is there is kind of a disconnect in people’s minds about the easy availability of energy and the factors that produce it. Soon the result of this key factor, a lack of new drilling will become apparent, and people will wonder where all the easy and cheap energy went. 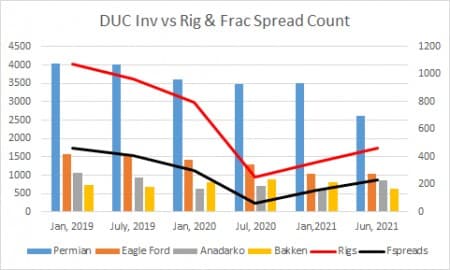 The chart above is telling us that prior to Jan of 2021, operators found it prudent to add DUC’s-Drilled but UnCompleted wells, into inventory. Low and wildly oscillating oil prices in this period and cheap drilling costs contributed to this strategy. After January we see a shift in DUC strategy as oil prices begin to ramp. To maintain production at roughly mid-2020 levels DUCs are withdrawn from inventory in preference to adding rigs to drill new wells. Frac spreads, necessary to DUC withdrawal, increase from July 2020 lows disproportionately to rigs as a result.

Shale wells have a naturally high decline year over year that can be abated temporarily by fracking. Make no mistake though, the lack of new drilling will start to show in a decline in production as early as next year. It will be a fairly shallow slope at first but will steepen as the ratio of older wells to newer wells increases. The result will be less oil being produced over time.

The chart below tracks the number of rigs actively searching for oil vs. the price of WTI. We have been in a rig-activity rebound over the last year from the crash of 2020, but not a rate that will maintain production at the current ~7.5 mm BOEPD output. For those who are interested, it took nearly 1,100 rigs, a figure that peaked in early 2019, to get us to 7.5 mm BOEPD. Thanks to the relative “youth” of much of the shale inventory, and advances in fracking-longer laterals, more sand per foot, production continued to climb through the first quarter of 2020. We all know what happened after that.

Fast forward to today, and you can see below the upward trajectory for rigs is significantly flatter than that of the commodity. There’s that old well vs. new well dynamic I mentioned above that will come into play. As the well inventory ages, production rates will decline, and without new wells to replace them, the overall output must go down. 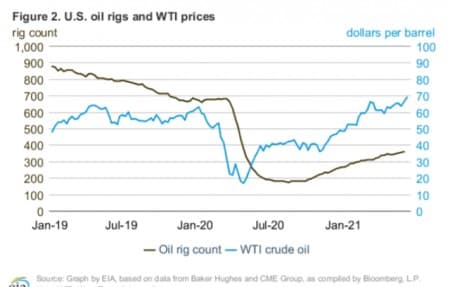 Now, it can be argued that prices in the $70s for WTI will alter this dynamic, and to a certain extent I don’t disagree. Drilling will likely increase, no doubt. But the industry has changed in the last couple of years and the ability to field 1,100+ rigs, and 450 frac spreads just isn’t there. Thanks to capital restraint, billions of dollars of equipment have been written down and scrapped. Employees have found new careers, and are reluctant to return given the turmoil in the industry.  But, even if we could scramble that much hardware and talent to meet the moment, it wouldn’t matter.

As a consequence of lack of investment and the degradation of the infrastructure-plants, equipment, and personnel make the eventual decline of shale production a “baked-in” reality. The ship is too close to the dock for this outcome to be altered in any meaningful way.

We have focused on shale wells so far but a quick mention of offshore production is warranted in this conversation. Offshore, mostly deepwater wells will come under the same figurative aging “knife.” They are orders of magnitude more expensive than shale wells, at least when only upfront costs are figured in. Thanks to their relatively low decline rates, 6-10% annually they compare very favorably over time. The larger point though is offshore has been an easy place to cut or defer capex, and the GoM well inventory upon which we rely for ~1.8 mm BOEPD is aging rapidly. As recently as August of 2013, there were 65 rigs searching for oil and gas in the deepwater GoM. By January of 2021, that figure had dropped to 11.

To close out this train of thought, the international rig count is also way down. In 2013 there was an average of 3,400 rigs turning to the right. Today the count stands at 1232. A case for delivering oil on the scale of years past cannot be made.

In a broader discussion, put forward in an earlier OilPrice article, this issue of lack of capex for new drilling was raised, along with more detail on then-emerging political, and social dynamics affecting oil production. It’s worth a re-read as some of the trends discussed were only barely coming into focus then, but here at mid-year, they are gaining momentum almost daily.

Some producers, like OPEC+, have restrained production the last couple of years, and have the ability to bring those barrels back. That will help in the near term and may delay the inevitable, but misses the larger points of why overall global production is set to go into underbalanced territory as early as next year.

In fact, an article carried in the Wall Street Journal noted that “Planned investment in oil supply globally falls about $600 billion short of what will be needed to meet projected demand by 2030, according to JPMorgan Chase & Co. analyst Christyan Malek. Pressure to deliver cash to shareholders, partly driven by worries about the long-run outlook for oil demand, has limited the industry’s ability to plow money into new projects, he said.” This reasoning was seconded in the article by another analyst.

“It’s just hard to see where the capital is going to come from to grow at a rate that will be needed from 2022,” said David Meaney, founding principal of Assert Capital Management LP. The Dallas-based hedge fund is positioning for higher oil prices through futures and options.”

It is also unlikely that the giant international firms like Shell, Chevron, and ExxonMobil, after each having been severely chastised by the investment community for not doing enough to dial back their carbon intensity at a greater rate than they had planned, will have any appetite to fund new oil and gas projects just for the purpose of making up a shortfall.

To summarize. In an amazingly short period of time, the world has made an irreversible bet on green energy sources - solar, wind, and biofuels - being able to shoulder much of its energy burden. This is a transition without a track record and a very spotty roadmap of implementation. Time will tell if this bet will pay off. If my judgment is correct, we won’t have long to find out.

By David Messler for Oilprice.com