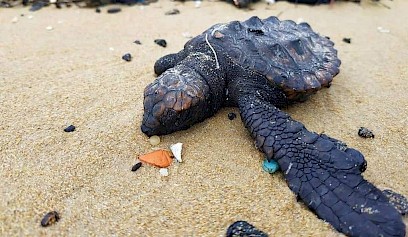 The Israeli government called on the public Sunday to refrain from visiting beaches in a wide swath of the country, amid the worst maritime pollution in decades.

Officials say the source of the pollution is a large oil spill at an unknown location.

Authorities said beaches between Rosh Hanikra in the north and the kibbutz of Zikim in the south, near the Gaza Strip, were closed to the public until further notice.

Tar from the accident has marred beaches over 170 kilometers (106 miles), 40 percent of Israel’s coast.

The pollution was first noticed Wednesday; the Environmental Protection Ministry says the most likely scenario is an unreported spill of perhaps dozens of tons of oil from a tanker. The ministry said Saturday it had been told by the European Maritime Safety Agency that an oil slick located about 50 kilometers (31 miles) off Israel’s coast was the source of the pollution.

Thousands of volunteers joined major cleaning efforts organized by NGOs and local authorities on Saturday. Officials say much work remains to remove all the tar, and most of it will have to be done by hand. The Israel Nature and Parks Authority believes the cleanup will take years.

Since Wednesday, animals have been found covered with tar, including a few birds and nine sea turtles. Four of the turtles died, while the others were taken to the National Sea Turtle Rescue Center at Mikhmoret between Tel Aviv and Haifa. There they were fed in an attempt to increase their metabolism and dilute the oil in their bodies.

The Nature and Parks Authority meanwhile announced initial findings from the autopsy of a whale that washed ashore on Thursday. According to Roni King, a veterinarian who works for the authority, a black liquid was found in the whale’s lungs, but that it was not yet known whether the liquid was linked to the whale’s death or if was related to the spill.