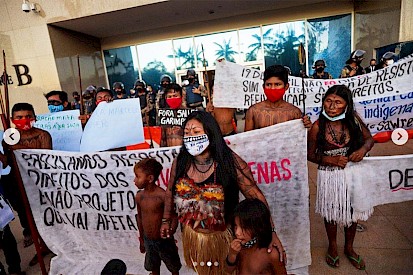 Indigenous people in Brazil are bracing for a surge in invasions and violence on their territories after a controversial bill that could make land grabs easier cleared a key legislative hurdle.

The proposed legislation, dubbed the “land grab bill” by critics, was approved in Brazil’s lower house of Congress on Aug. 3, with 296 lawmakers voting in favor and 136 against. Known as PL 2633/20, the bill is now headed for a Senate vote. Indigenous rights groups say they expect senators to begin reviewing the proposal as early as next week.

“This bill has an impact because it has put land grabbing as a priority,” said Juliana de Paula Batista, a lawyer with the Instituto Socioambiental (ISA), a nonprofit that advocates for the rights of Indigenous and traditional peoples.

If signed into law, the bill would allow for the legalization of claims by squatters illegally occupying public lands — including undesignated forests and Indigenous territories still awaiting full recognition and demarcation by the federal government — with little oversight by environmental authorities, activists say.

The bill’s success in the lower house represents the latest in a series of blows to Indigenous rights in Brazil. Under President Jair Bolsonaro, fines for environmental violations have dropped to their lowest level in more than two decades, according to a recent study. The president has also promised to open up reserves to wildcat miners and vowed not to demarcate a “single centimeter” more of Indigenous land.

“Certainly, in the coming months, there will be an intensification in the invasions of territories and of conflicts,” he told Mongabay in a phone interview. “We believe this will generate more conflicts. Because the land grabbers won’t stay still. They will descend on these territories.”

Encouraged by friendly signals from the government, invaders have ramped up their attacks on Indigenous territories in recent months — both those that are fully recognized and others in the process of demarcation. Illegal gold miners set fire to the homes of several Indigenous leaders in the Munduruku Indigenous Reserve earlier this year in northern Pará state, before attempting to destroy police equipment that had been brought in to expel outsiders.

In northern Roraima state, the Yanomami Indigenous Reserve has been repeatedly hit hard by illegal miners, triggering action from federal prosecutors last month to ban wildcat miners in the area. Violence flared up again last week, when an Indigenous man was reportedly run over and killed by a small plane belonging to illegal gold miners.

Attacks on native people are not restricted to the Amazon region. In Rio de Janeiro state, Indigenous people in the Tekohá Dje’y territory are also fighting off attacks and threats by settlers who reject their ancestral rights to land that’s still under a demarcation process.

The land reform bill was initially proposed by President Bolsonaro in a nod to the sizable agricultural support base that helped elect him in 2018. Proponents say the bill will improve the regulation of land titling, helping small farmers finally obtain the property deeds for land they have occupied for decades.

But critics disagree. In reality, the law would benefit larger agricultural estates rather than smallholders, who already benefit from existing laws, ISA’s Batista said. And it would encourage deforestation of public forests by allowing deeds to be handed over to land grabbers without verification of the environmental status of the area, she added.

“We have to bear in mind there are 51 million hectares [126 million acres] of undesignated public lands in Brazil,” she said. “Their designation needs to be done through a well-thought-out policy … And not just benefiting whoever invaded, deforested and barbarized. And that is what this draft bill is doing.”

Nearly 30% of undesignated public lands across the Amazon have been illegally claimed by land grabbers through the national system of rural land registration, known by its Portuguese acronym CAR, according to the Amazon Environmental Research Institute (IPAM).

“By approving the land grabbing bill, the message that the deputies pass on to Brazilians is that it is worth it to invade and deforest public land,” Mariana Mota, public policy coordinator at Greenpeace Brasil, said in a statement. “Deforestation and land violence are getting a huge boost.”

Indigenous groups and rights advocates are now lobbying for key changes to the draft bill, in hopes of cutting out some elements to soften its blow on Indigenous land rights. They are also fighting against any amendments that could benefit land grabbers, such as further weakening of oversight in the land-titling process.

Indigenous rights are also under threat from a slew of proposals at the state and federal levels, which critics call “anti-Indigenous.” This includes a stalled proceeding in Brazil’s Supreme Federal Court (STF) that will decide whether the government can deny land rights to Indigenous people whose territory was stolen before 1988, when the Brazilian Constitution came into force.

The STF ruling in that case is expected to set a precedent that will decide whether the courts can place a time limit on the land rights of Indigenous people, known as marco temporal in Portuguese. Litigators have argued that this 1988 cutoff date is unfairly arbitrary, since many Indigenous groups were forced off their ancestral lands by settlers much earlier.

Indigenous activists are planning demonstrations in the capital Brasília later this month, aimed at pressuring the judiciary to finally vote against the marco temporal and change key aspects of the PL 2633 bill before it undergoes a vote in the Senate, according to Oliveira from CIMI.

“We hope that we can achieve some changes to this proposed law, which is deeply harmful to our communities — and to the country as a whole, which will end up handing over its public lands.”