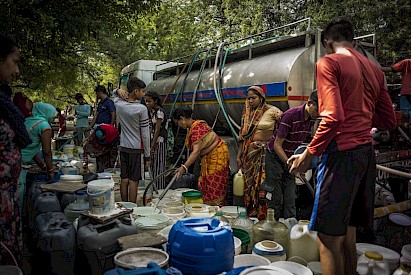 NEW DELHI — Vigyan Shukla, a 45-year-old farmer on north India’s plains, has known heat all his life. But not heat like this.

When temperatures began to soar in Uttar Pradesh state several weeks ago, Shukla’s wheat crops began to shrivel and his cows provided less milk. When the mercury hit 118 degrees Fahrenheit last week, a record high in Shukla’s town of Banda, it became punishing for humans, too: Seven of his 25 farm hands came down with diarrhea, a symptom of heat stroke. Others refused to stay outside past 10 a.m.

“People are just not able to work,” said Shukla, who cut hours for his farmworkers during this year’s wheat and lentil harvest. “If it’s a matter of one or two days, people can try to work hard through it. But with this longer wave, they’re falling sick.”

Typically, heat waves in India only affect part of the country, occur in the summer and only last for a week or so. But a series of early heat waves this spring have been longer and more widespread than any observed before. India experienced its hottest March on record. Northwest and central India followed with their hottest April.

“This probably would be the most severe heat wave in March and April in the entire recorded history” of India, said Vimal Mishra, a climate scientist at IIT Gandhinagar.

Despite the unprecedented heat, fewer people appear to be dying. Heat waves in 2015 and 1998 took thousands of lives, but the India Meteorological Department has reported only a handful of deaths so far.

Across India, extreme heat has forced farmers, construction workers and students to rearrange their lives, showing how daily routines are changing — and work productivity is declining — in countries that are already among the poorest and hottest in the world.

In recent weeks, education officials in nine northern states have cut the length of classes in half so that students can be dismissed by 11 a.m. Some have ended the school year early. Administrators of large government-run rural employment programs mandated that workers digging canals and ditches stop before noon.

These shifts may be small on their own, but taken together they have far-reaching impacts. India loses more than 100 billion hours of labor per year because of extreme heat, the most of any country in the world, according to research published in Nature Communications.

“We’re reaching some of these critical thresholds in Southwest and South Asia, where people can no longer efficiently cool themselves and it’s almost deadly just to be outside, much less work,” said Luke Parsons, one of the paper’s co-authors. “It’s a really major issue in terms of who bears the cost of climate change first.”

After the heat eased briefly last week, a new wave began over the weekend that will last for several days. The highest temperatures will be felt on Wednesday and Thursday in northwest India in the states of Rajasthan and Punjab, but much of the country will endure temperatures over 104 degrees Fahrenheit (40 Celsius).

India is trying to adapt.

Renu Shekhar, a parent in the city of Jaipur, which hit 110 degrees on April 29, said her 12-year-old daughter Purvai can go to school for only three hours every morning under new rules set by the city. Sports and morning assemblies in the schoolyard have been scrapped. Inside the school, which has no air no conditioning, classes are half as long.

Shekhar said she worried her daughter would fall behind in her studies. Purvai was happy to be spending less time in the classroom but missed playing soccer, basketball and hide-and-seek.

“The children are so weak that we can’t even stand outside or play with friends,” Purvai said. “We have to spend all our days in homes only with board games.”

But staying inside can put undue strain on the country’s energy grid. India’s peak power demand hit records three times in a single week in April as those who could afford air conditioners cranked them up.

“Running AC has a negative impact on the climate change problem,” said Mishra, the climate scientist. “Here you want to adapt, but then you’re harming mitigation. That is a classic problem. We are using more energy to adapt.”

But the vast majority of Indians have no access to air conditioners, and in a country where nearly half the population works outdoors — mostly in farming and construction — the government is scrambling to limit the effects of prolonged exposure.

The Ministry of Health issued an advisory last month to all employers requiring them to install temporary shelters and limit hours for new workers. Citizens were urged to stay indoors from noon to 3 p.m. and learn about the symptoms of heat stress. Last week, the country’s hospitals were ordered to review their stocks of intravenal drips, ice packs and oral rehydration salts.

Several states have introduced changes to a vast government program known as the National Rural Employment Guarantee Act (NREGA), which offers minimum-wage jobs to more than 50 million households every year.

Raghvendra Tewari, a local official overseeing NREGA programs in Banda, set a target of about 6,000 workers digging canals and ditches. But only 2,000 showed up during the peak of the recent heat wave, he said, and organizers have stopped taking daily attendance. Instead of working 9 a.m. to 5 p.m., teams now start around dawn and disband by 11 a.m.

“The heat is never so bad that we’ve had to do this before,” Tewari said.

The extreme heat is straining not only farmers but also their crops, as high temperatures coincided with the final weeks of the planting season, when grains need cool weather to mature. Devinder Sharma, an agricultural policy expert, said a quarter of every acre of Indian wheat could be lost to the heat.

The world’s second most-populous country isn’t on the verge of food insecurity, Sharma said, but could face an emergency if the wheat crop falls short again next year: “What happened this year was a clear sign that if there is a repeat, India will be standing with a begging bowl.”

Shukla, the farmer in Banda, is already seeing the effects on his withering wheat crop. His income this year fell by almost $40,000, he estimated, and he has had to scale back plans for family weddings.

But the greatest burden has fallen on those in the fields. Laborers on Shukla’s farm, including women and children, were working under umbrellas with towels wrapped around their heads, and resting in makeshift sheds made of bamboo and straw. But there was no protection from heat this extreme.

“People were fainting, coming down with fever,” he said. “It’s a matter of grave concern. It’s only happening because of the temperature.”