In the face of losses, a new vision for Brazil’s Amazon is taking shape 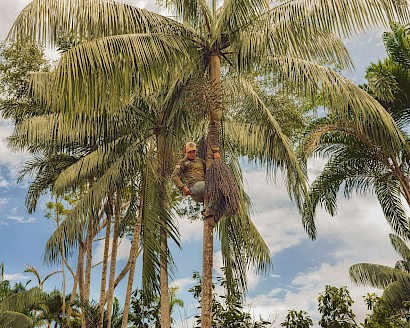 The Brazilian Amazon has lost nearly 20 percent of its natural forest coverage and it is not difficult to understand why. The development model for the region historically championed by Brazil’s government has most often meant clearing the rainforest to build something from scratch, whether timber operations, mines, cattle pastures or soybean fields.

This extractive mindset has also meant opening long highways and air fields to integrate “the empty territory” — as the Amazon was commonly misrepresented — with urbanized coastal cities, pushing unexploited frontiers further and further away.

But what if Brazil chose a different path?

Developing an economy based on native species and the natural landscape — that is, using what already exists there intelligently without depleting or destroying it — has never been official policy. But this is exactly what a growing movement is trying to do in Brazil. With deforestation hitting record highs in the Amazon, several players, from researchers and activists to businesspeople and government officials, have been trying to reimagine a future of the rainforest that breaks free of the exploitive model.

One of the most notable initiatives on this front is Amazon 2030. Following  global outrage about the forest fire crisis in 2019, the project run by a group of researchers has been busy investigating the roadblocks to sustainable development in the region. Later this year, they will take an action plan to government decision-makers.

As part of the initiative, Salo Coslovsky, an associate professor of urban planning and public service at New York University, showed that start-ups developing sustainable products are blossoming in the Amazonian states. These include Peixes da Amazônia, an Amazonian fish company; Nossa Fruits, which produces native fruits such as açai; and 100% Amazônia, an Amazonian food export company. But these struggle to gain scale due to common impediments such as land tenure insecurity, a lack of infrastructure, and overseeing sanitary conditions of food, to mention just a few.

Another similar initiative, set up in 2020, brings together around 500 people from the private and public sectors who are seeking solutions for the sustainable development of the region. They are targeting Brazil’s Congress and want to attract, by late this year, at least 40 lawmakers and 10 governors to back their proposals. They also aim to get about 1 million Brazilians in the streets on Amazon Day, Sept. 5. The day is celebrated nationally to raise awareness of the importance of the rainforest.

Brazil has historically viewed the Amazon as an impediment to progress, but there are many efforts underway to reframe the discussion. Sustainable solutions based on the economy of the forest — or the “bioeconomy” — are leaving niche academic and environmental circles and reaching the mainstream. Some of this knowledge derives from the experience of Indigenous communities that have dwelled by riversides and in the rainforest for centuries.

With Brian Barth, I reported a series of stories for FERN about Amazon forest ventures that aimed to counter the trend of ranching. And recently, at the site Diálogo Chino, I wrote about an Amazonian Indigenous group that has developed a technique to extract oil from pequi fruits. They won the UN Equator Prize in 2019, which recognizes innovative solutions for sustainable development.

In October 2021, the Amazonian city of Belém also hosted the World Forum on Bioeconomy, an unprecedented event that was attended by Brazil Vice President Hamilton Mourão and other executive authorities. In response to global outcry about the Amazon, Mourão deployed soldiers to protect the rainforest against illegal fires and deforestation in 2020. The forum had coverage from mainstream media outlets, including the nationwide Globo TV.

The elevation of the Amazon is particularly relevant this year as Brazil holds presidential elections in October. There’s growing public awareness about the value of the region. A poll released in September 2021 showed that 80 percent of Brazilian voters believe the protection of the Amazon should be a priority for candidates, and 58 percent said they would favor a candidate who has a plan to preserve the biome. Another 71 percent think that the country’s progress depends on the conservation of the Amazon.

This poll — the first one that has focused on the rainforest — comes on the heels of widely reported studies showing that deforestation is causing the Amazon to release more carbon dioxide than it can absorb, and that it might reach a tipping point if nothing is done. Still, it is difficult to know how much the issue will impact voting.

But politicians are paying attention. Former president Luiz Inácio Lula da Silva, who is leading the polls, often talks about the Amazon in his speeches. He has proposed the creation of a technology institute to research forest-based products and services. He has also promised to set up a ministry for the protection of Indigenous people, who have been facing increasing violence from illegal miners and loggers.

“Returning to govern this country will mean that nothing will be done in the Indigenous territories without your concession,” Lula said in early April at a gathering of Indigenous groups in Brasilia. The former president who, during his term of office between 2003 and 2010, promoted colossal projects that caused significant problems in the Amazon, including the Belo Monte dam, added that he “learned a lot” since his tenure. “We know what we did, what we didn’t do, and what could be done.”

In that way, Lula also stands in opposition to his main opponent, Brazil’s president, Jair Bolsonaro. The far right has been notorious for dismantling federal environmental agencies, pushing to open mining in protected areas, and weakening enforcement against land-grabbing.

Bolsonaro has not mentioned the Amazon in his campaign events, at least nothing that has been published in the press. At international events, on the other hand, the president often acknowledges the relevance of the region and says reports about the Amazon are distorted, as during his trip to Hungary in February: “We are treated as if we were the villains when it comes to the forest destruction, which is not happening.”

A study published in Nature in 2021 showed, however, that relaxed enforcement of environmental policies since 2019 — when Bolsonaro took office — has led to “some of the most severe potential impacts on biodiversity” of the Amazon in over a decade. Whether that can be stemmed, or even reversed, might well depend on how strong Brazil’s will is to reimagine a new future for the rainforest.