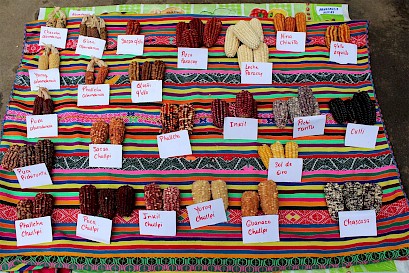 Earlier this year, the Peruvian government established a new agrobiodiversity zone a tenth the size of its capital, Lima, high in the Andes. Here, in the Marcapata Ccollana community, the 22,679-hectare (55,800-acre) zone is home to 99 varieties of potato that flourish alongside dozens of other root vegetables and a mélange of protein-rich and pest-resistant grains.

This Quechua-speaking Indigenous community of 814 people is the fourth to be recognized as an agrobiodiversity reserve by the government of Peru as part of a strategy to preserve the genetic variety of useful plants and their wild relatives where they occur.

The newly protected area is the result of a joint effort by the Marcapata Ccollana community, environmental nonprofits Amazon Conservation and ACCA, the U.N. Development Programme, and various branches of government including the Peruvian National Protected Areas Service, and the government of the Cusco region where the zone is located. It forms part of a mosaic of high-altitude protected areas, sitting just west from the Ccollasuyo agrobiodiversity zone, declared in late 2020, and bordering Ausangate, another regional conservation area that guards one of Peru’s highest peaks.

“For Andean peoples, their crops and the productivity of their lands are some of their greatest riches,” said Anahí Oroz, field coordinator for the project at ACCA.

The farmers of Marcapata Ccollana use dung from the area’s alpacas, llamas, and vicuñas to increase the fertility of their communally held lands, which are turned over in a collaborative agricultural system involving minka, barbecho and terracing methods that date back to the time of the Incas. Crops are rotated from one season to another and fields are left fallow for up to five years. Wool from the animals is harvested as well, yielding fabrics.

Marcapata is a land of year-round chilly temperatures and torrential rains, with up to 3,000 millimeters (118 inches) of precipitation a year. It straddles a dizzying range of elevations from 3,000 to 5,000 meters (9,800 to 16,400 feet) above sea level, comparable to the Tibetan Plateau. Most of the agrobiodiversity zone lies above the tree line. It takes five hours to drive the 100 kilometers (60 miles) to these highlands from the regional capital of Cusco along the Interoceanic Highway that connects Peru to Brazil. The road follows a path that, for millennia, enabled coca leaves, gold and silver to be traded between the Amazonian lowlands and the high Andean civilizations.

At the time of the Spanish conquest in the 16th century, the Incas cultivated almost as many species of plants as the farmers of the entire Asia-Europe landmass. Although they had no iron, wheels, or draft animals for plowing, this wealth of agricultural biodiversity allowed the farmers of the highlands to support a population of some 15 million people, similar to the present-day population of the high Andes. Under Spanish rule, plants that had been central to Inca society were intentionally replaced by European species such as wheat, barley and carrots.

“This is about recognizing the ancestral labors of the original communities,” Oroz said, referring to the government policy of in-situ species conservation.

Plants of the past and the future

Agrobiodiversity is the legacy of human collaboration with evolution. It is the result of both natural selection and human inventiveness as they have interacted across landscapes over thousands of years. But agricultural biodiversity is disappearing, according to the U.N.’s Food and Agriculture Organization (FAO). Worldwide, it is estimated that more than 90% of crop varieties have disappeared from the countryside since modernity began its march.

Industrial agriculture — with its monocultures, patenting, and other concepts of intellectual property that enclose the genetic commons — is the principal reason for the decline in agricultural biodiversity. Genetic erosion is exacerbated by the trend toward the loss of forests and coastal wetlands, the pressures on uncultivated areas where wild cousins of domesticated plants can proliferate, and the destruction of aquatic environments.

As the climate mutates, a diversity of useful species is especially important to food security, as it gives humanity the opportunity to adapt agriculture to changing conditions.

The farmers of Marcapata are heirs to a rich legacy of root vegetables even beyond their hundred potatoes. They grow 26 kinds of oca, a plant that yields tubers in an array of interesting shapes resembling carrots gone awry; 17 kinds of mashua, a high-yield and cold-resistant crop allegedly fed to the Inca soldiers to inhibit sexual desire; and 13 kinds of ulluco, known in Latin American cities as papa lisa, a particularly attractive species that may have bright yellow, pink, purple, or even candy-striped skin.

“It’s about tuber polycultures. They are all grown in the same plot,” ACCA’s Oroz said. For Andean farmers, multicropping systems are an effective and affordable way to control pests. “At the higher elevations they’ll have potatoes and other tubers [that are resistant to the cold temperatures], and lower down you’ll find more maize and beans.” Varieties of maize and quinoa, as well as tarwi beans and kiwicha amaranth further color the landscape.

This wealth of crops provides the most direct benefits to the communities presently farming and eating them. But the potential extends far beyond Peru.

“That these traditional native crops have a possible role in future food production is indicated by the success of the few that escaped the colonial confines,” wrote Hugh Popeneo et al. in their 1989 magnum opus, Lost Crops of the Incas: Little-Known Plants of the Andes with Promise for Worldwide Cultivation. Tomatoes, lima beans and peppers are examples of Andean crops that have shaped palates and economies across the globe. As the fourth-largest crop in the world, the potato is a commodity worth more than $90 billion a year and has played a central role in historical events. Researchers find that many of the tubers cultivated in the high Andes contain more protein, are more pest-resistant, and have more interesting flavors than the potatoes most of us are familiar with.