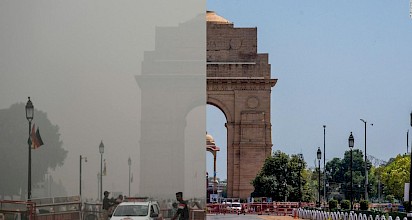 The most recent battle in a long history of battles in Oxford has been triggered by the low traffic neighbourhood scheme, a network of barriers and cameras being built in my area as part of efforts to reduce the air pollution linked to the deaths of one in 17 people who live in the city.

These measures are not extreme. Each household will receive 100 days of exemptions to the traffic gates per person. The traffic planters leave the vast majority of roads unaffected. Yet these gentle restrictions have led to mass meetings full of howls of rage and harrumphing. The rate of vandalism of bollards and planter barriers is so high that cameras will have to be installed. Not a week goes by without someone expressing their frustration over traffic calming measures as un-calmly as possible.

Meanwhile, on the other side of the world in Delhi, where I spend half my year, an entirely different type of catastrophe is unfolding before our eyes. Forty years ago, the population was 6 million. Now, beneath the influx of refugees fleeing internal conflict, deforestation and the slow death of centuries of village life in rural India, it is growing so fast that by 2030 it is forecast to be the world’s most populous city, with almost 40 million residents.

As a child, I can remember being able to look down the street on which we lived. Now, owing to vehicle emissions, brushfire burning and construction dust, visibility is 100 metres on a good day. Back then you could put down a book and, when you picked it up hours later, it would not be covered in a layer of dirt.

A 40C (104F) day used to be the cause of public comment; now this conversation is saved for when the temperature hits 50C. I can remember rich people exercising in parks without being out of breath after 10 minutes. The true measure of wealth in Delhi is now measured in how little you have to go outdoors. And all of this has happened within 20 years.

I live part of the year in Oxford and part in Delhi, running a consultancy that builds relationships between businesses in India and Britain, and also working with street children. In the UK, I am an avatar of the coming Asian century, a Sunakian first-generation immigrant success story.

In India, my British accent means I must know what I am doing. There, I can see the results of two centuries of nonexistent economic growth under British rule. In Britain, I can enjoy what those riches built. And so these are the two worlds I travel between. One of comfort, of arguments about numberplate-recognition cameras, floral vandalism, fury that a trip to John Lewis may become 20 minutes longer. In the other, a subcontinent facing food riots.

In the face of climate catastrophe, the greatest privilege is that of time. Britain has had about four centuries as a colonial power. It has had more than 200 years of industrialisation, 75 years of peace, and in excess of 30 where it has known the scale of the climate problem ahead. A country with some of the world’s most innovative businesses and recent advances in nuclear, solar, wind and hydroelectric technology has nothing to fear. What was centuries of colonial exploitation for, if it wasn’t to build Britain’s riches for this very moment?

But the attitude of wealthy western countries to the climate crisis seems to involve more heart-rending and soup-throwing than action. Over the past 40 years, the residents of Britain and the western world have outsourced their carbon-intensive industries to China. What they do not seem to want to do is the difficult, practical work of building decarbonised economies that benefit working people and create jobs.

The problem is compounded by the fact the UK also has the luxury of time in another sense: the climate crisis is hitting India faster and harder, and I see it every time I am there. It is one of the bitterest ironies of global heating that it will exacerbate existing inequalities. G20 countries are responsible for more than three-quarters of global emissions. But Pakistan, which has recently suffered catastrophic flooding that has put a third of the country under water, is responsible for less than 1%. The effects of the climate emergency will be felt least in northern Europe, the home of the Industrial Revolution and the birthplace of the modern world and its reliance on carbon emissions.

In Kashmir, where I used to go for holidays as a child, the climate crisis has transformed the region from alpine wonderland to sectarian oven, with midsummer temperatures of 40C. Back then I remember coming to the capital, Srinagar, to marvel at the crystal clear waters of Dal Lake and its houseboats. Now, excessive dumping has meant visitors marvel at the colours and rapid growth of competing runaway algal blooms. Tourists who ask if they can go for a swim get looks of utter incredulity.

The dream of every Kashmiri businessperson I know used to be that it would become the home of ski resorts of global renown, attracting millions every year. Now glacial retreat, highly variable, often nonexistent, snowfall and winter temperatures above 10C have put those dreams on hold. The apple harvest, which supplies a vast proportion of the region’s agricultural income, has become late and variable with frequent failures. A growing body of research links higher temperatures to increased political violence. Kashmiris ponder, with their typical gallows humour, how much worse the situation can get.

And so the big cities – Delhi, Srinigar, Islamabad – are flooded with the results: young men with nothing to do, from small failed farms, divorced from their villages and culture. Underpaid, sucked into lives of crime, they are the perfect fodder for extremist organisations. A third of India’s population is under 18; two-thirds is rural. In a subcontinent where young, frustrated, futureless men are the currency of political violence – and where the most important political number is the price of onions and its effect on household food availability – India has an endless supply.

Meanwhile northern Europe, at least at first, will have its warmest autumns on record. Several thousand fewer people will die from the cold, tourism will boom, and there will be increased potential for crops that were previously considered unsuitable for Britain’s climate.

Britain is not in terminal decline, as it often seems to want to believe. Its history, its sense of self and its value to the world did not end in 1945. Britain did not grow rich from refused planning applications. The country houses, the dreaming spires, the suburban villas, the delightful misunderstandings over cream teas, the very riches of Britain did not create themselves. They were the product of centuries of relentless investment and innovation, of constant progress, of annoyed neighbours, of hisses and sneers, of tearing up the settled, mottled fabric and building something new.

The 21st century is a giant knotted intersectional problem of intergenerational justice, interracial justice, international justice. Britain risks sacrificing its future and that of billions worldwide if it does not act now, when it has time and while the government can still effect change.

If not, it will soon have much larger problems than traffic gates, planters and numberplate recognition cameras. It will face something that no amount of money can forestall, that cannot be run from, that cannot be bargained away or shouted down.