In a besieged Amazon, people take up cameras to save their land 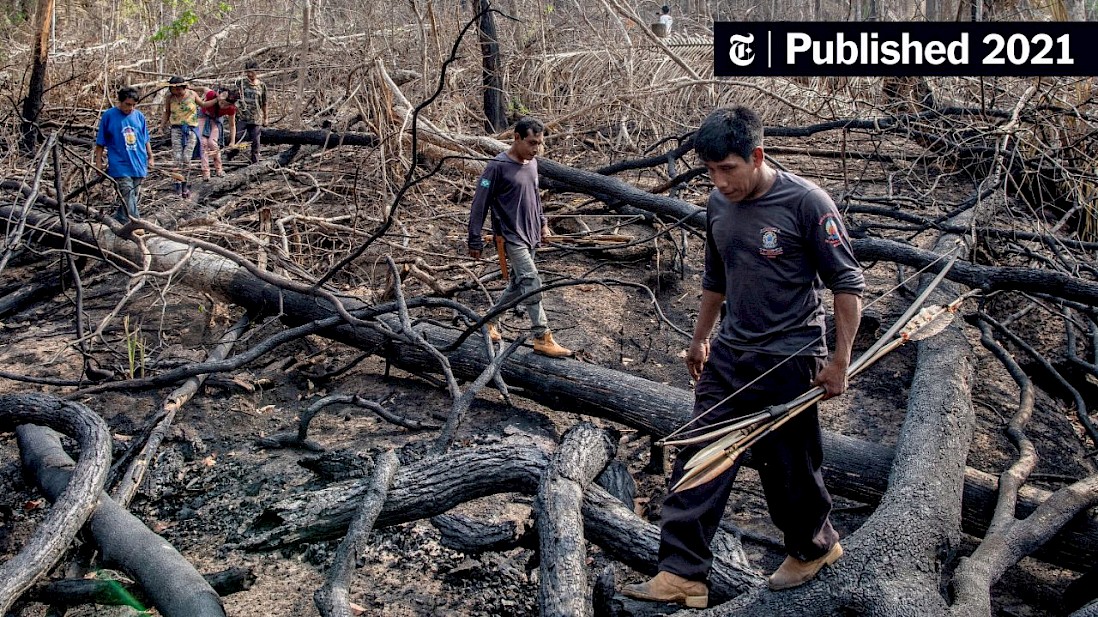 Forty years ago, Brazilian officials made first contact with a tribe of Indigenous warriors called the Uru-Eu-Wau-Wau in the rain forests of the western state of Rondônia. The contact was the culmination of a years-long pacification campaign by FUNAI, Brazil’s Indigenous affairs agency, to lure the tribe from the jungle with gifts, such as knives, axes, cloth, and mirrors.

The ramifications of that contact, and the tribe’s resolve to defend its land and traditions, is now the subject of a powerful new documentary, The Territory, released by National Geographic Documentary Films in select theaters on August 19.

In the early 1980s, Rondônia was experiencing intense social and environmental upheaval. That was largely thanks to a newly constructed, 900-mile highway called BR-364, which was bringing in a torrent of outsiders crammed aboard buses and flatbed trucks. They came by the tens of thousands, mostly impoverished city-dwellers and landless wage laborers from southern and northeastern Brazil, pursuing the promise of free land and a dream to own their own little piece of paradise.

A frontal assault on the rain forest ensued. Branching off from BR-364, settlers soon cut secondary, then tertiary, roads into the jungle as they occupied and cleared parcels to make way for crops and pastures. As colonizers chewed their way deeper into the forest, satellite imagery revealed a pattern of fragmentation that resembled the skeleton of a fish, leading ecologists to coin the term “fishbone roads” to describe Rondônia’s environmental devastation.

Violence went hand-in-hand with leveling the forest. The newly arrived settlers saw the Indigenous people whose lands they grabbed as a dangerous nuisance, best dealt with through the barrel of a gun. An escalating war of flying bullets in one direction and flying arrows in the other ensued, with predictable results. There were reports of organized extermination raids, of entire Indigenous villages wiped out. Both settlers and Indigenous warriors abducted women and children and carried out revenge killings. Into this breach stepped the field agents of FUNAI, who sought to “pacify” the Uru-Eu-Wau-Wau and settle them in a protected reserve before they were wiped out.

The Rondônia land rush and FUNAI’s long campaign to contact the Uru-Eu-Wau-Wau were richly documented in a pair of articles published in National Geographic’s 100th anniversary issue in December 1988.  Though part of the Uru-Eu-Wau-Wau had befriended the FUNAI team by then, other warriors were still holding out in the bush, refusing contact. At one point around the time of the Geographic’s coverage, bowmen launched arrows at the FUNAI “attraction post,” as bases set up to establish contact with isolated tribes were called. One of those arrows pierced a field agent’s lung, requiring an emergency evacuation by helicopter.

The Uru-Eu-Wau-Wau were the unquestionable losers of this tragically skewed conflict. While Rondônia’s population swelled by a staggering 15 percent a year through the 1970s and ‘80s, tribal populations plummeted. Though violence took its toll, the greater threats by far were the contagious diseases imported by the settlers, among them influenza and measles, for which the native populations had little to no immunological defense. In his 1988 article, “Last Days of Eden,” Loren MacIntyre reported that FUNAI officially put the tribe’s estimated number at 1,200. But his personal observations, gleaned from reconnaissance flights and on-the-ground expeditions, led MacIntyre to believe the real number was closer to 350.

Today, the surviving 180 members of the tribe are facing a renewed onslaught. As forests have been mowed down elsewhere in Rondônia to make way for cattle ranches and soy plantations, their 72,000-square-mile reserve remains one of the last bastions of untrammeled wilderness left in the state. At least four bands of isolated Indigenous nomads still wander its depths. It is also the target of covetous outsiders.

Encouraged by the inflammatory rhetoric of Brazil’s rightwing populist president, Jair Bolsonaro, a new wave of highly organized settlers began to push into the Uru-Eu-Wau-Wau Indigenous Territory in 2019. The tribe’s courageous efforts to defend its land and traditions in the face of these threats is the subject of the new documentary, The Territory.

Directed by Alex Pritz, the film relies at pivotal moments on verité footage shot by the Uru-Eu-Wau-Wau themselves. That was not part of the original plan. But when the COVID-19 pandemic broke out in 2020 and the tribe closed its land to outsiders, Pritz and his production team found themselves scrambling to salvage the project. They decided to take a gamble, dropping sanitized cameras at the gate of the Uru-Eu-Wau-Wau village, then sharing how-to videos remotely via WhatsApp.

“I created a demonstration video,” Pritz says, recounting how he spelled out the fundamentals of camera handling. “Here’s the on button, here’s record, here’s the sound levels, da, da, da.” Once the Indigenous cinematographers mastered the basics, the video workshops progressed to the ins and outs of producing sequences and scenes. “We would take Brazilian films in Portuguese and we’d chop them up to show them, ‘Here’s an establishing shot. Here’s a close up. Here’s how you cut between these two different things.’”

For more than a year, the Uru-Eu-Wau-Wau filmed and produced their own material. “They let us know, ‘Hey, we’re going on a surveillance trip. This is what we think is going to happen,’” Pritz recalls. “We’d brainstorm some questions: who to follow, how to shoot it. Then they’d go and get what they could get, and we’d find out after.”

The result is an astonishing and dramatic look at the life of an Amazonian Indigenous community under siege, as seen from the inside. We see the community’s daily activities, their nighttime around the fire, their meetings. Most compelling of all, we witness their efforts to monitor their territory and confront land grabbers illegally clearing forest inside their reserve. In the process of filming the documentary, the Uru-Eu-Wau-Wau discovered a potent weapon to assist in their territorial defense.

“It’s very important I think that indigenous people film our own struggle, our defense of the territory,” wrote cinematographer Tangãi Uru-Eu-Wau-Wau in a text message from inside the reserve. “Those who live in the village experience these things as they are happening. We live the threats, the invasions of the territory, the land-grabbers, the loggers. In filming, we’re able to document the principal things in our community.”

Among the main characters is 22-year-old Bitaté Uru-Eu-Wau-Wau, who suddenly must assume the reins of the tribal organization, Jupaú, following the brutal 2020 murder of his comrade Ari in a town just outside the reserve. (Brazilian authorities say they have arrested a suspect in the case but have released few details.)

In a WhatsApp message written from a monitoring post on the border of the territory, Bitaté told National Geographic he hopes the film will sensitize audiences inside and outside Brazil to the realities that the Uru-Eu-Wau-Wau are facing on a daily basis. “I want the world to know my people, to understand that we are a hard-working people who are always fighting to protect our territory in every way.” 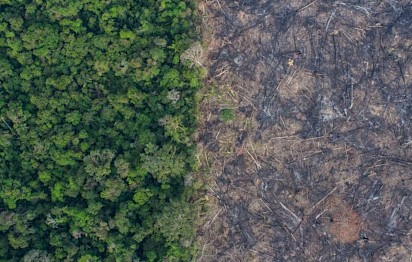 What further establishes The Territory’s groundbreaking credentials is the access Pritz and his team gained to the settlers seeking to stake their claim to land inside the Indigenous reserve. Cameras follow would-be homesteaders with their chain saws into the forest as they topple centuries-old trees and set the jungle ablaze. We soon realize we are witnessing the anatomy of a brazen, illegal land grab.

Like the desperate settlers who flooded Rondônia in the 1980s and vociferously complained that the Indigenous people had “too much land,” these modern-day pioneers see themselves as the champions of progress, the key to Brazil’s future prosperity. “It makes me sick that we’re considered criminals, like we’re the ones hurting the country,” says a young settler named Martins, speaking to the camera as he sets fire to the plot of land he’s just cleared. “Eventually, the government will support us, but only after we’ve done the initial work.”

An older settler named Sergio is seen leading a highly organized effort to grab a huge chunk of land—enough to settle 1,000 families—in the center of the reserve. He says with undisguised bitterness of the Uru-Eu-Wau-Wau: “They don’t farm. They don’t produce anything. They just live there.”

Comparing his experiences to the Geographic’s reportage from 1988, Pritz was struck by the likeness of the dynamic playing out on the Rondônia frontier between then and now. “It does feel like any one of those quotes from the magazine could be transferred into the film, or that a quote from the film could dropped into that article, word for word,” says Pritz.

On a more upbeat note, he adds: “The big thing that’s changed in the way the story is being told is that the Indigenous community has agency. Even if they’re not winning the war, they’ve got a new set of tools with which to fight a little more and on different fronts. That feels exciting to me.”

In one particularly poignant scene, we see Bitaté’s family at night swinging in hammocks around the communal fire. Staring into the orange glow of the flames, Bitaté’s aging grandfather, Warina, recalls the time—shown in archival footage—when he and his fellow warriors were seduced by the pots, pans, and other gifts brought by the FUNAI agents. “If that hadn’t happened, we wouldn’t be here now, surrounded by white people,” he laments. Back then, he says “you could walk forever and only find trees.”

Speaking in his native language, he urges Bitaté to take up the fight to defend the land and keep the Uru-Eu-Wau-Wau from disappearing altogether. “It’s up to the next generation now.” We feel as though we’ve been allowed in to witness the passing of the torch.

Now encircled by farms and pasturelands, the Uru-Eu-Wau-Wau Indigenous Territory serves as a potent symbol for all the embattled reserves and peoples that are holding back a tidal wave of devastation that threatens to engulf the entire Amazon.

At one moment in the film, we see Indigenous rights activist Neidinha Bandeira swinging in a hammock in her home in Rondônia’s capital of Porto Velho. She grew up the daughter of a rubber tapper among the Uru-Eu-Wau-Wau. Her Indigenous daughter, Txai Suruí, is one of the film’s executive producers.

“They burn without thinking,” we hear Bandeira’s voice over images of smoldering forest. “The Uru-Eu-Wau-Wau territory is like a barrier against deforestation. If it’s cut down, we will lose the rest of the rain forest.” As we see a Google Earth view of the emerald-green Indigenous land surrounded by a sea of devastation, Bandeira adds: “Preserving the Uru-Eu-Wau-Wau territory is beyond a shadow of doubt the way we will save the Amazon.”