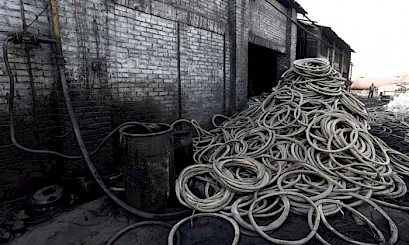 According to several reports by Pakistan’s online newspaper Daily Times, these are illegal tire pyrolysis plants operating in the adjacent to Pakistan Indian province of Punjab. The newspaper says the pyrolysis plants extract oil from end-of-life tires despite the official regulations imposed by Punjab Environmental Protection Agency (EPA).

Reportedly, such tire pyrolysis plants are not only operating illegally near Lahore but have also become a major reason of air pollution in Gujranwala, Sheikhupura, Rahim Yar Khan, Multan, Faisalabad and other districts of the province. However, the majority of the plants are operating in Lahore and Gujranwala divisions.

Daily Times says that experts and medics have raised their concerns over the issue, warning that recycling tires and plastic material without proper environmental concerns leads to the release tremendous amounts of pollutants and residue that settle deep in the human lungs. Many studies have also highlighted the rising number of patients with lungs and respiratory diseases in Lahore and other cities of the province.

Lahore, according to the newspaper, has become one of the most polluted cities in the world, owing to which in recent years authorities have been taking stern action against polluters and sealed many air polluting units including brick kilns, steel mills and pyrolysis plants. According to EPA officials most of the brick kiln and steel mills have updated their systems according to the guidelines of EPA and PDMA.

Describing the problem with the illegal pyrolysis, the magazine writes:

“Although, Pyrolysis plants were sealed and their Site Inspection Reports (SIRs) were submitted by the relevant District Officers (DOs) Environment to headquarter, but the official seeking anonymity revealed that these plants’ owners in violation of the law, again started work after breaking seals. The official said that pyrolysis plants owners are a mafia and are deep rooted in EPA and other relevant departments.”

“These illegally operating pyrolysis plants not only extract furnace and crude oil but also extract wires and carbon ash from used tyres and sell them in market at low price. Reportedly these plants extract over 100,000 liters oil daily and in this process hundreds of tons of carbon powder are released in the air.”

“A few months back Punjab Environmental Tribunal (PET) heard a case in this regard in which EPA was ordered to make and submit an analysis report of such pyrolysis plants. A few plants were allowed to operate for the specific period till the completion of their monitoring. Interestingly, all those plants are operating continuously despite after the completion of their air quality monitoring.”