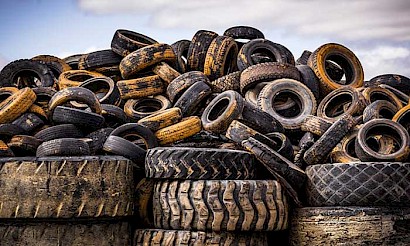 Kwik Fit – the fast-fit specialists in the UK for tires, exhausts, batteries and brakes – claims that, according to official estimates, tire fly-tipping is on the rise in England and Wales.

Kwik Fit’s communications director, Roger Griggs, said: “There is absolutely no excuse for an end-of-life tire to be fly tipped. Tire dealers must ensure that used tires are dealt with by a registered waste company and those companies have a duty to process them responsibly. Although they need to be covered by a ‘waste’ licence, used tires still have value as a raw material and therefore it makes even less sense for them to be fly tipped.”

This is a persistent problem in the United Kingdom, as well as Germany, the two largest free markets for end-of-life tires. While there is still some dumping in countries with extended producer responsibility, such as France, Italy, and Spain, it is uncommon in those markets.

When a tire fitter takes a tire from a car at his workplace, in the United Kingdom the tire is considered waste. Only tires swapped in a customer’s driveway when the client does not want to pay a recycling fee could end up outside the trade. However, disposing of tires is not always simple for the public, as not all councils have tire bins at their amenity sites. Small dumps, therefore, could very well be ascribed to private persons.

Larger dumps could come from stores that, for whatever reason, do not charge a recycling fee, or who, after charging one, want to get rid of the tires for free. A single merchant working alone might easily dump a truckload of tires.

Alternatively, retailers may frequently take the lowest available price for tire disposal. This manner, tires can end up with a fly-by-night operator who collects and dumps.

The solution is simple, but the UK tire industry has been fighting it for years. At the point of emergence, remove the profit center from waste tires. Remove the profit that retailers can make from recycling fees and instead collect the money through a tax, or an environmental levy, on each tire sold. The agency then pays legitimate collectors and recyclers agreed-upon fees. At any stage in the chain, anyone collecting outside the system loses money. Collecting outside of the allowed chain is pointless. Fly tipping of tires is reduced as a result.