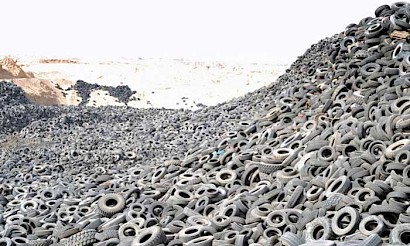 Arab Times Online report that Hundreds of used tires are discarded everyday in the Amghara scrapyard’s vicinity, signaling the emergence of a new “Arrhiya” neighborhood. It also denotes the onset of an issue that, if not addressed early on, could become difficult to resolve in the future, according to the Al-Rai newspaper. This issue is dangerous not just because used tires are discarded illegally, causing environmental pollution, but also because it threatens the campers and livestock near the Amghara scrapyard.

As some of those in charge of scrapyards dump different types, sizes, and forms of tires, old cars are the main fuel for this threat, which is still in its infancy. Some of them set fire to the tires in an attempt to cover up the crime with another crime, for which the environment pays the price in the form of land and air pollution. After being officially commissioned by the Cabinet, the Environment Public Authority (EPA) relocated more than 42 million tires that had accumulated in the Arrhiya area, which is located within the area of the South Saad Al-Abdullah Housing Project, to the Salmi area.

According to the newspapers, with the help of government and private organisations, Kuwaiti EPA was able to complete its pledge to transfer 507 tons of tires from Arrhiya to Salmi in some six months.