How waste food can reduce our reliance on natural gas 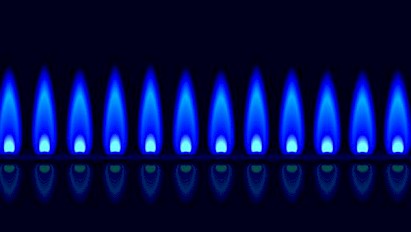 At a large industrial facility not far south-west of Ireland’s capital Dublin, one man says old food waste and pig manure can help Europe fight climate change – and reduce its reliance on Russia for energy. Billy Costello explains that decaying organic matter releases biogas, which firms like Green Generation, the one he directs, can collect and purify to produce methane, or biomethane as it’s called when it comes from such sources.

It’s an opportunity to find sources of energy other than the natural gas supplied by Russia and thereby distance ourselves from Vladimir Putin’s regime, he argues: “The best thing is if you can make the gas, put it in and replace Putin.”

European governments have faced a difficult scenario since Russia launched its invasion of Ukraine, on one hand introducing sanctions against Putin’s regime and wealthy businessmen close to him, while on the other continuing to buy millions of dollars of gas every day from Russia. Europe gets roughly 40% of its natural gas from Russia and some countries have been reluctant to follow the US in imposing a ban on imports of Russian fossil fuels.

This is why the European Commission recently decided to set new, ambitious targets for biomethane production and other fuel sources in Europe. President of the Commission, Ursula von der Leyen, said in a statement, “We must become independent from Russian oil, coal and gas. We simply cannot rely on a supplier who explicitly threatens us.”

It means replacing around 150 billion cubic metres (bcm) of Russian gas with gas from other sources and using a variety of alternative energies too. The Commission hopes that biomethane can supplant the equivalent of 35bcm by 2030, a more than 10-fold increase from today’s European biomethane output of only around 3bcm.

At the Green Generation plant, out-of-date food from a supermarket chain, manure from a nearby pig farm and other waste is heaved into a giant anaerobic digester. Costello has a range of buyers for the biomethane that he collects from this system, including clients in the UK, who use it in gas-powered road vehicles.

Biomethane, being chemically identical to natural gas, can also be burned to make electricity or sent via a gas grid to household boilers. About half of the biomethane consumed in Europe in 2015 was used for home heating.

There are two key differences between natural gas and biomethane, though. Firstly, capturing it from decaying materials prevents the direct release of methane that would otherwise have escaped into the atmosphere. This is important since methane is a greenhouse gas that is around 84 times more potent than carbon dioxide when measured over a 20-year period. When burned, biomethane only releases carbon that was already in circulation whereas natural gas, being a fossil fuel, releases carbon that otherwise would have remained locked underground.

Secondly, biomethane can be produced in far more locations than natural gas, meaning countries can avoid having to rely upon those with fossil fuel reserves.

Billy Costello says there is plenty of waste going to waste, as it were, in Europe that could instead be processed by the biogas industry.

Anaerobic digesters can run on a wide variety of materials, or feedstocks, including sewage sludge, animal fat, seaweed, forestry waste and grass cuttings as well as discarded household food and animal manure.

But Costello is sceptical that there is actually enough waste in Europe to reach the huge target set by the European Commission. And he is not alone in questioning the 35bcm goal.

“That’s much, much higher than we would see as feasible for 2030 using these waste and residue feedstocks,” says Chelsea Baldino, a researcher who focuses on fuels at the International Council of Clean Transportation.

The problem is not just that gigantic volumes of waste are required, it’s that this material must be transported to where the anaerobic digesters are, and the gas released has to be purified too. Massively scaling up Europe’s biomethane industry, currently a collection of relatively small plants dotted around the continent, is no mean feat.

Baldino and her colleagues worry that Europe will end up using crops such as maize in the rush to accumulate enough biodegradable organic matter for Europe’s emerging fleet of anaerobic digesters. But that’s when biomethane could become a lot less green.

“When you’re using these crops to produce biogas or biofuel, you’re raising the price of these food and feed crops,” says Baldino. “You’re bringing more land into production.”

That could accelerate the destruction of rainforest halfway round the world, if high demand for these crops in Europe were to lead to the expansion of agricultural land in places such as the Amazon rainforest. Such a scenario could mean that switching to biomethane would not reduce emissions as much as it otherwise could.

Baldino points out that about half of the biomethane currently produced in Europe comes from maize silage, which is often used as animal feed. She and her colleagues would prefer the biomethane industry to rely on waste sources. But doing so could limit production to 15bcm or less by 2030, they estimate.

It is important to note that there is significant disagreement over how much biomethane could come from waste sources in Europe in just eight years, however. The European Biogas Association is much more optimistic, and says that 35bcm is achievable without relying on food crops such as maize.

The International Energy Agency meanwhile says there is “limited potential” to scale up biomethane production in the short-term because of the lead time needed for such projects. The agency suggests that a number of different measures, including increasing gas imports from countries besides Russia, must be combined in order to achieve a total of roughly 30bcm in alternative gas supplies in the near term.

Whether the Commission’s goal is achievable or not, proponents within the industry say that biomethane production could increase sharply in the coming years.

Part of the challenge with biomethane is the complexity of the anaerobic digestion process itself. Although a wide range of feedstocks can be used to produce biogas in digesters, Kari-Anne Lyng, senior researcher at the Norwegian Institute for Sustainability Research, says that they all have different levels of protein and other compounds such as ammonia. The microbes that digest these feedstocks do their job best when such molecules are well-balanced. If they’re not, the environment within the digester becomes toxic to the specific microbes inside it that make the methane.

Sludge from fish farms is rich in fat and protein, which is good for methane production but is actually too productive on its own to ensure stable digestion. However, companies tend to mix it with other, less fatty feedstocks to get the right balance.

This is what happens at the Skogn biogas plant in central Norway, where wastewater from a paper mill is mixed with 70,000 tonnes of sludge from fish farms every year. It is the largest liquid biogas plant in the world.

The companies behind the plant emphasise biomethane’s potential as a fuel for road vehicles. Compressed into a liquid, it can be pumped into a fuel tank just like diesel and power a heavy truck over long distances more reliably than a battery could with today’s technology.

Many firms are already using biomethane in either liquid or compressed forms in their vehicles. John Lewis Partnership, a retailer in the UK, is one example. The company hopes to have all 600 of its delivery trucks running on the fuel by 2028.

But some are concerned that the rapid expansion of biomethane as a fuel for vehicles will make it difficult to know whether users of the fuel are relying on truly green biomethane or more dubious products.

“We are not convinced that the system for certifying this sort of stuff is robust enough,” says Nick Molden, founder and chief executive of Emissions Analytics, an independent emissions-testing firm.

He says that, unfortunately, the automotive industry is no stranger to falling foul on emissions standards. In 2015, Volkswagen was found to have installed technology in 11 million of its cars that produced inaccurate results on emissions tests, making them look cleaner than they really were. The company apologised at the time.

But Molden says that a good system of checks and balances for the biomethane industry is theoretically feasible. There are tiny amounts of impurities in biomethane that vary depending on which feedstocks were used to produce it, he explains: “It gives you a fingerprint of where that is likely to come from.”

That could reveal, for example, whether a shipment of biomethane said to come from European waste sources only was actually partly derived from crops grown in South America.

The challenges with scaling up biomethane don’t stop there, however. Part of the whole attraction of the fuel is the promise that it will lower methane emissions. But it is difficult to perfectly trap methane at anaerobic digester plants. Small but not insignificant amounts of the gas tend to leak.

A study of 10 UK biogas plants published in 2021 found that the rate of these leaks varies considerably and that if they are not accounted for and reduced, they could be enough to threaten the UK’s net zero target. (The natural gas industry is also associated with methane leaks.)

Plus, the material left in an anaerobic digester after biomethane has been collected – known as the digestate – is rich in nutrients and sometimes turned into fertiliser products via composting. But a separate study, also published last year, found that this process of composting solid digestate was associated with methane emissions 12 times higher than raw food waste composting, apparently due to the activity of microbes that are transferred from the anaerobic digester. The researchers suggested that it might be possible to remove the microbes before composting the digester waste in order to prevent this from happening.

If this material can be processed safely, however, there are high-value nutrients locked up in it that could benefit agriculture in Europe. Many biogas plants currently discard digestate because of the costs of transporting and processing it, says Joshua Cabell, a PhD candidate at the Norwegian Centre for Organic Agriculture. “Perhaps rising fertiliser prices will incentivise the use of digestate,” he adds.

Biomethane may not be a miracle fuel. There are too many complexities for that to be the case. But it is tantalising to think of how much energy we could get from waste that might otherwise pile up, decompose, and further worsen the climate crisis.

Billy Costello fizzes about the potential and the variety of other opportunities that come with rethinking all this waste. Some of the out-of-date food he receives at his plant arrives in plastic packaging, which is removed. Green Generation has come up with a way of turning this into 100% recycled plastic flower pots and he will soon produce plastic telephone poles as well.

While the targets set by the European Commission remain lofty, Costello is reassured to see that biomethane is finally getting so much attention.

“We should have been doing this anyway,” he says, “regardless of Putin invading Ukraine.”