How extreme heat can influence mood and mental health 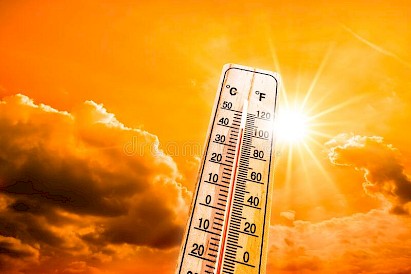 Tens of millions of people across the United States have been enduring heat wave after heat wave this summer, in what feels like an unrelenting succession of humid days and scorching temperatures. While there’s no denying that extreme heat and humidity can be physically uncomfortable, research suggests that such conditions can be trying on your psychological well-being, too.

“We see across the whole spectrum of mental health” that heat extremes are damaging to mental well-being, said Nick Obradovich, a computational social scientist at the Max Planck Institute for Human Development and co-author of a 2018 study that analyzed the mental health risks of climate change.

Studies have found links between rising temperatures and a range of mental health issues including mental fatigue, aggression and even higher rates of suicide. This connection is not just limited to surges in temperature, Dr. Obradovich said, it’s also present for people living in climates where it is consistently hot. (Though of course mental health trends can depend on a variety of factors outside of temperature, too.)

Scientists have yet to uncover why this may be, and whether heat itself can cause brain changes that may lead to these effects. But regardless, experts say, it’s clear that oppressive heat is linked with worse mental health.

What the research says

Evidence suggests that “temperature extremes can influence everything from your day-to-day mood all the way up to your probability of experiencing an acute mental health crisis,” Dr. Obradovich said.

One study published in JAMA Psychiatry in February, for instance, scrutinized the medical records of more than 2.2 million adults who visited emergency departments from 2,775 counties across the United States between 2010 and 2019. The authors found that there were about 8 percent more emergency department visits for mental health concerns on the hottest days of summer than there were on the coolest days. Emergency visits for issues like self-harm, as well as for substance use, anxiety, mood and schizophrenia disorders, all rose consistently in proportion with the temperature.

This trend is “fairly uniform for both men and women, for adults of all ages and for people living in all parts of the U.S.,” said Amruta Nori-Sarma, an environmental health scientist at the Boston University School of Public Health and an author of the study.

What is going on in the body?

“When we’re not comfortable, we’re not at our best,” said C. Munro Cullum, a clinical neuropsychologist at UT Southwestern Medical Center, in Dallas. The discomfort of heat, and the energy it takes for the body to cool down, can lower overall resilience. So agitation, irritation and pain become less bearable, he said.

Our bodies are also used to a certain baseline level of stress, said Dr. Martin Paulus, scientific director and president of the Laureate Institute for Brain Research in Tulsa, Okla., who worked with Dr. Obradovich on his 2018 study. When the body attempts to regulate its temperature during a heat wave, he said, it adds additional strain and results in more stress and inflammation. People with pre-existing mental health conditions may be especially vulnerable to the added heat stress, which can push their symptoms over the top, he said.

As for what’s happening in the brain during extreme heat, that’s challenging to study, Dr. Paulus said. In a lab, you can experiment with how the brain and the rest of the body withstand a few minutes or possibly hours of high temperatures, but you can’t do that for days, weeks or months at a time — and it’s those longer exposures that are really important for understanding how climate change may affect us in the long run.

But the fact that this link between heat and mental health is so consistent in people around the world suggests that the heat is doing something to the brain, Dr. Nori-Sarma said. Some researchers have hypothesized that heat may cause an imbalance in brain signaling or inflammation in the brain. But another prominent theory is that heat causes sleep disruptions, which in turn can worsen mental health symptoms.

Warm nights significantly worsen sleep, Dr. Obradovich said. “And we know from a large body of literature in psychology and psychiatry that insufficient sleep, sleep difficulties, and insomnia are very closely linked to worse mental health status over time.”

It’s possible that the explanation for heat’s effect on mental health may come from a combination of these different existing theories, Dr. Obradovich added.

Other potential elements at play

We also cannot forget about climate anxiety, Dr. Paulus said. Wildfires and heat waves, among other weather-related events, are increasing in frequency and intensity because of climate change. As global warming worsens, eco-anxiety might exacerbate other stress, anxiety, depression or even disaster-related post-traumatic stress disorder symptoms, he added.

Certain people are also more vulnerable to heat than others. In their 2018 study, Dr. Obradovich and Dr. Paulus’s team found that those with lower incomes experienced worse mental health effects from heat than those with higher incomes, and women experienced worse effects than men. Combined, they found that the effect of heat on mental health was twice as bad for low-income women as it was for high-income men.

In the throes of a heat wave, it’s not always clear how to protect yourself. But being mindful of your heat exposure, staying hydrated and avoiding the heat when you can, are always good options. Looking out for people in your community is also a powerful, overlooked strategy, Dr. Nori-Sarma said.

That means “neighbors checking in on neighbors, friends and families making sure that everyone’s OK.”