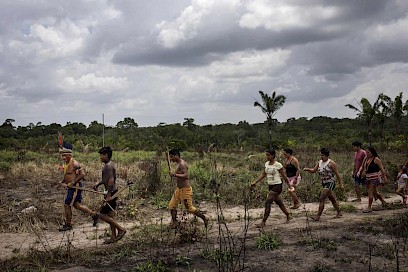 As U.S. President Joe Biden develops his climate change agenda for the global stage, foreign and trade policies could also be used to tackle the thorny issue of rising deforestation in the Amazon, researchers and former officials said.

A U.S. executive order issued by Biden in January to address the “profound climate crisis” requested officials to develop a “plan for promoting the protection of the Amazon rainforest and other critical ecosystems that serve as global carbon sinks”.

During his election campaign, Biden also raised the prospect of mobilizing $20 billion toward safeguarding the Amazon.

Academics from 10 U.S. and Brazilian universities, together with environmental groups, backed a report last month on how Biden should deal with Brazil, advising the president to limit commodities imports through an executive order.

They called for U.S. policy to block goods linked to forest destruction - mainly beef, soy and timber - coming in from Brazil, which is home to roughly 60% of the Amazon and where deforestation is on the rise.

“The United States has a responsibility and contributes indirectly to deforestation in Brazil,” said Mariana Mota, public policy coordinator at Greenpeace Brazil.

“So the most important (thing) … is that these products do not have free access to (the United States),” she said.

Protecting tropical rainforests is regarded as a vital buffer against global warming because of the vast amounts of planet-heating carbon dioxide they absorb.

But clearing of the Amazon for agriculture, mining and other commercial activities is sapping its ability to act as a carbon sink, scientists have warned.

Deforestation in Brazil’s Amazon surged to a 12-year high in 2020, according to government data published in November.

Attaching conditions that would help preserve the Amazon to foreign policy issues of concern to Brazil’s right-wing President Jair Bolsonaro could also be effective, said experts.

U.S. support for Brazil’s bid to join the Organisation for Economic Co-operation and Development, for instance, should be tied to a firmer commitment by Brazil to protect its forests, resources and people, said Nara Baré, coordinator of COIAB, the largest umbrella group for Brazil’s Amazon indigenous tribes.

Spearheaded by funding from Norway, countries including Brazil, Colombia and Peru have been paid hundreds of millions of dollars in recent years for emissions avoided by cracking down on illegal forest-clearing in the Amazon.

But Carlos Rittl, a former executive secretary of the Brazil-based Climate Observatory, a nonprofit network, questioned the effectiveness of economic incentives for Brazil.

“It’s not a lack of money that stops Bolsonaro’s government from protecting the Amazon,” he said.

Environmentalists say Bolsonaro’s policies have weakened conservation efforts and his rhetoric has emboldened illegal ranchers, loggers and land speculators to cut down the Amazon forest to expand their business.

In the United States, a bipartisan group of former U.S. cabinet officials and chief climate negotiators recently outlined policy recommendations to the Biden administration about how best to protect the Amazon rainforest.

They recommended that Congress expand the Lacey Act - which already bans the import of illegally trafficked wildlife, plants and timber - to prohibit the import of agricultural commodities grown on illegally deforested land.

In addition, it called for laws to require U.S. consumer goods and agricultural firms to investigate and report on deforestation in their supply chains, and a ban on imports of products from illegally deforested land in future trade deals.

“The Biden administration is likely to be very active in trying to help Brazil to be responsible in the development of the Amazon,” Loy told the Thomson Reuters Foundation.

“I expect Brazil will be quite diligent in protecting the sovereignty of its role in the Amazon rainforest but I don’t expect that it will be totally inhospitable to American and other moves to address the problem of climate change,” he added.

A letter from Bolsonaro to Biden on his inauguration noted Brazil’s commitment to the Paris accord, clean energy and protecting the environment, including the Amazon.

And this week Brazil’s foreign relations and environment ministers held a virtual meeting with U.S. climate envoy John Kerry, agreeing to deepen cooperation on climate change and fight against deforestation, a statement from Brazil said.

Loy said Biden could also explore expanding existing U.S. legislation on “debt-for-climate” swaps, in which a share of foreign debt is forgiven in exchange for devoting those resources to tackling climate change and biodiversity loss.

Another source of funding for tropical forest protection could be revenue from a carbon tax - a levy companies pay when they pollute - if the U.S. Congress can “muster the will” to impose such a tax, he added.

The U.S. government is set to publish more specific plans on combating climate change before a meeting of major emitting nations Biden will convene in late April. 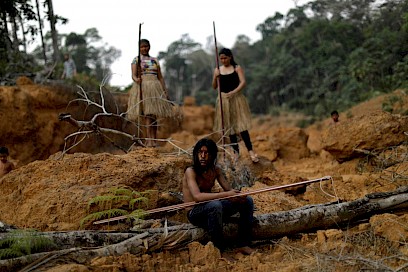 Hopes are high, meanwhile, among Amazon indigenous leaders that Biden will help fund efforts to stem rising deforestation - but they want to ensure their views influence policies.

Jose Gregorio Diaz, director of the Coordinating Body of Indigenous Peoples of the Amazon Basin (COICA), said “the knowledge and wisdom of indigenous peoples are key to mitigating climate change”, but are rarely taken into account.

“Most of the plans and programs intended to protect the Amazon are executed without prior consultation, planning or participation of indigenous peoples, who are in the territory defending the mother jungle,” said Diaz, whose organization represents more than 500 tribes across the nine countries in South America home to the Amazon basin.

Luiz Amaral, an expert at the Washington-based World Resources Institute (WRI), said coalitions to tackle climate change needed to be established that bring the United States and tropical forest nations together.

“The U.S. can and should help take this agenda to the next level but you are going to have to do this in concertation with other actors … including the developing countries,” said Amaral, who leads WRI’s work on commodities and finance.

Slowing deforestation is a key part of tackling the global climate challenge and for that, “we need everyone”, he added.