How a laser fusion experiment unleashed an energetic burst of optimism 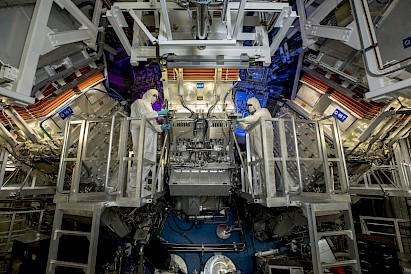 Scientists have come tantalizingly close to reproducing the power of the sun — albeit only in a speck of hydrogen for a fraction of a second.

Researchers at Lawrence Livermore National Laboratory reported on Tuesday that by using 192 gigantic lasers to annihilate a pellet of hydrogen, they were able to ignite a burst of more than 10 quadrillion watts of fusion power — energy released when hydrogen atoms are fused into helium, the same process that occurs within stars.

“This is about 10 percent of that,” Dr. Herrmann said. And all of the fusion energy emanated from a hot spot about as wide as a human hair, he said.

But the burst — essentially a miniature hydrogen bomb — lasted only 100 trillionths of a second.

Still, that spurred a burst of optimism for fusion scientists who have long hoped that fusion could someday provide a boundless, clean energy source for humanity.

“I’m very excited about this,” said Siegfried Glenzer, a scientist at the SLAC National Accelerator Laboratory in Menlo Park, Calif., and who had led the initial fusion experiments at the Livermore facility years ago but is not currently involved in the research. “This is very promising for us, to achieve an energy source on the planet that won’t emit CO2.”

The success also signified a moment of redemption for Livermore’s football-stadium-size laser apparatus, which is named the National Ignition Facility, or N.I.F. Despite an investment of billions of dollars — construction started in 1997 and operations began in 2009 — the apparatus initially generated hardly any fusion at all. In 2014, Livermore scientists finally reported success, but the energy produced then was minuscule — the equivalent of what a 60-watt light bulb consumes in five minutes.

On Aug. 8, the burst of energy was much greater — 70 percent as much as the energy of laser light hitting the hydrogen target. That is still a losing proposition as an energy source, consuming more power than it produces. But scientists are confident that further jumps in energy output were possible with fine-tuning of the experiment.

Dr. Herrmann said that normally, Livermore scientists would not talk until after a scientific paper describing the findings had been published. But these findings “have been spreading like wildfire,” he said, “and so we thought it would be better to put some facts out there now.”

Stephen Bodner, a retired plasma physicist who has long been a critic of N.I.F., offered congratulations. “I am surprised,” he said. “They have come close enough to their goal of ignition and break-even to call it a success.”

More promisingly, the fusion reactions for the first time appeared to be self-sustaining, meaning that the torrent of particles flowing outward from the hot spot at the center of the pellet heated surrounding hydrogen atoms and caused them to fuse as well.

Riccardo Betti, chief scientist at the University of Rochester’s Laboratory for Laser Energetics, gave an analogy to how an automobile engine works. “You deliver energy in a very small fraction of the fuel through a spark in the spark plug, and then that energy gets amplified by the combustion of the fuel,” he said. “So, the same thing happened in the Livermore experiment.”

Dr. Herrmann was more circumspect, noting that the results fell short of the definition set by a National Academy of Sciences report in 1997, that the fusion energy produced needed to exceed the amount of energy delivered by the lasers to the hydrogen. “We’re on the threshold,” he said.

Dr. Glenzer, however, said he was sure that the fusion had propagated. The fusion reactions produced a torrent of subatomic particles known as neutrons — more than instruments could count.

The improved fusion results also help the National Ignition Facility fulfill its primary use — to verify that nuclear weapons work. After the United States suspended underground nuclear testing in 1992, lab officials argued that some way was needed to verify the computer models that replaced testing.

Dr. Herrmann said that within 24 hours of the latest experiment, someone working on the program of modernizing nuclear weapons contacted the N.I.F. team. “They’re interested in applying this to important questions that they have,” he said.

The center of the National Ignition Facility is the target chamber, a metal sphere 33 feet wide with gleaming diagnostic equipment radiating outward.

The laser complex fills a building with a footprint equal to three football fields. Each blast starts with a small laser pulse that is split via partly reflecting mirrors into 192 beams, then bounced back and forth through laser amplifiers before converging on a gold cylinder that is about the size and shape of a pencil eraser.

The laser beams enter at the top and bottom of the cylinder, vaporizing it. That generates an inward onslaught of X-rays that compresses a BB-size fuel pellet of carefully frozen deuterium and tritium, the heavier forms of hydrogen. In a brief moment, the imploding atoms fuse together.

Since the initial promising 2014 results, the N.I.F. scientists have tinkered with the setup of the experiment. The capsules containing the hydrogen are now made of diamond instead of plastic — not because diamond is stronger but because it absorbs X-rays more readily. The scientists adjusted the design of the gold cylinder and the laser pulse to minimize instabilities.

After years of only modest improvements, the combinations of modifications started paying off, and the calculations indicated that the Aug. 8 shot might triple what N.I.F. had produced in the spring. Instead, the gain was a factor of eight, far more than had been predicted.

“I think everybody was surprised,” Dr. Herrmann said. Part of the current analysis is figuring out what changes had worked so well.

N.I.F. itself cannot serve as a blueprint for a future power plant. Its lasers are inefficient, and it can fire only about once a day. A laser fusion power plant would need to vaporize hydrogen pellets at a rate of several per second.

Dr. Glenzer said SLAC was working on a laser system that would work at lower levels of power but fire much more rapidly. He said he hoped fusion, overshadowed in recent years by solar energy and other energy technologies, would again gain prominence in efforts to replace fossil fuels.

Federal financing for fusion research is low, even as the Biden administration has put emphasis on reducing climate change.

“Sometimes it happens, in the worst year of your funding, you get the greatest results,” Dr. Glenzer said.

Although Dr. Bodner prefers an alternative approach to the one in the current experiment, he said the N.I.F. result pointed to a path forward.

“It demonstrates to the skeptic that there is nothing fundamentally wrong with the laser fusion concept,” he said. “It is time for the U.S. to move ahead with a major laser fusion energy program.”

Lasers are not the only approach aimed at harnessing fusion for future power plants.

Scientists have also used doughnut-shaped reactors called tokamaks that use magnetic fields to contain and compress the hydrogen fuel. In the late 1990s, the Joint European Torus experiment in England was able to generate 16 million watts of fusion power for a brief moment, going about 70 percent of the way to producing as much power as it consumed. An international project named ITER is now building a larger tokamak reactor in France, scheduled to start running in 2025.