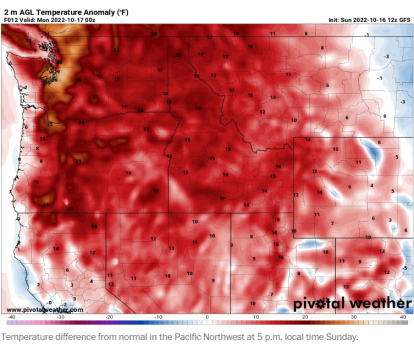 Temperatures soared Sunday in the Pacific Northwest as Seattle broke its long-standing record for the hottest day this late in the season, reaching 88 degrees. Dry, gusty conditions helped spread fires burning over the region, which released plumes of smoke, fouling regional air quality.

This is the third historic heat event to hit the Pacific Northwest in two years, as human-caused climate change boosts temperatures ever higher.

The record-shattering heat broke Seattle’s previous Oct. 16 record high by a staggering 16 degrees. It was the city’s second-warmest October day in 130 years. The only hotter October day occurred on Oct. 1, 1987, when it was 89 degrees.

“It still feels like summer never ended,” said Seattle resident Adam Flash. “The stereotypically ‘rainy city’ hasn’t rained in months.” Less than half an inch of rain has fallen in the city since July.

Summerlike temperatures also baked Portland, Ore., which reached a record 86 degrees Sunday, its fifth day in a row in the 80s. On Saturday, it soared to 87, its highest temperature on record so late in the season. The city has set record highs on seven days this month, reaching at least 80 degrees on 12 days, doubling the previous October record of six such days.

Several other cities in the Pacific Northwest set record highs Sunday, including Vancouver (86 degrees), Olympia (85) and Bellingham (80) in Washington, and Hillsboro (86) and Troutdale (83) in Oregon.

Unusually warm air aloft and easterly winds causing warm, dry air to descend from the mountains are creating a perfect recipe for temperatures to increase throughout the day, said meteorologist Dana Felton of the National Weather Service forecast office in Seattle.

“It’s very, very, very unusual for us to have fires going in October,” Felton, who has lived in Seattle for 36 years.

Winds from the east pushed the worst of the smoke from the fires in the mountains into residential areas throughout the Northwest. Air quality across much of the Puget Sound region and coastal Washington ranged from “unhealthy for sensitive groups” to “unhealthy for everyone” on Saturday, according to the Puget Sound Clean Air Agency. Near the Cascades, air quality was predicted to reach “very unhealthy or worse” levels.

People outside for any length of time on Saturday experienced sore throats or chest tightness, Felton said. “It just wasn’t a good day to be outside for very long.”

Flash said residents in the Seattle area could feel, see and smell the pollutants in the air. “It definitely isn’t comfortable being outside,” he said.

Air quality alerts remain in effect through Thursday in western Oregon and Washington, including Portland and Seattle.

“Pollutants in smoke can cause burning eyes, runny nose, aggravate heart and lung diseases, and aggravate other serious health problems,” the National Weather Service cautioned. “Limit outdoor activities and keep children indoors if it is smoky.”

Winds from the west might improve air quality and push the smoke out intermittently, but the smoke is likely to hover over the region until Friday, Felton predicted.

While smoke might linger, the heat has mostly exited. In Seattle, forecast highs this week are mainly in the 60s, and there’s a chance of rain Friday. Portland is forecast to be mostly in the 70s, although it may nick 80 one more time on Wednesday, the Weather Service predicts.

While it was historically warm in the Pacific Northwest over the weekend, unusually cool weather invaded the Upper Midwest and Great Lakes, which experienced some of their first snowflakes of the season.

This latest bout of heat in the Pacific Northwest is the third to occur in just over a year’s time. To end July, Seattle tied a record for its longest stretch with highs at or above 90 degrees. Portland also experienced a record-long stretch of exceptional heat, with a full week of consecutive days at or above 95 degrees.

In June 2021, an unprecedented heat wave scorched the Pacific Northwest. Portland and Seattle set all-time highs of 116 and 108 degrees, respectively. Scientists concluded that such high temperatures were “virtually impossible” without factoring in the effects of climate change.