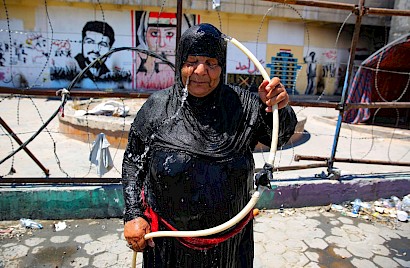 Iraq ranks fifth on the list of countries most vulnerable to the impacts of climate change, and it is heating faster than much of the globe. Almost 20 years after the U.S.-led invasion of Iraq, the country is ill-equipped to cope with the strain.

In the southern provinces of Basra, Dhi Qar and Maysan, authorities said Saturday that the electricity grid had lost power for a second night in a row, plunging millions of homes into darkness through the sweltering night. Food spoiled in fridges. Parents put their children in the car and drove for hours — the air conditioning in their vehicles was the only way to stay cool.

By Sunday morning, the governor of Dhi Qar province, one of the poorest in Iraq, said that a public holiday for state employees would be extended until the religious festival of Muharram begins Tuesday, “due to the noticeable rise in temperatures.”

Ten months after populist cleric Moqtada al-Sadr won the largest number of seats in parliamentary elections here, politicians from the country’s Shiite, Sunni and Kurdish blocs are fighting bitterly over the shape of a new government. As a result, no budget has been passed and major spending decisions are on hold.

But as forecasts indicated that most Iraqi provinces were likely to witness temperatures of around 120 degrees or higher this week, the electricity grid is not the only public service faltering.

Farming and fishing, two crucial pillars in the state’s attempts to move away from reliance on oil revenue, are being pummeled by drought. Overstretched hospitals are treating cases of heatstroke or breathing difficulties that have probably been worsened by toxic fumes trapped in the air, doctors say.

On Baghdad’s streets Sunday, young boys hawked water from ice boxes, sparing their faces from the sun with sweat-soaked scarves. Veteran traffic police said their job was getting harder and harder. “I’ve done this for 16 years,” said Falah Nouri, 37, as he rested on a battered sidewalk by the Tigris River. “It’s not just the sun. It’s the fumes and how the concrete heats beneath our feet.”

He said that his soles had been burned and that he was wearing shoes recommended by his doctor as a result. “He wants me to take time off, but how do I get time off? We need to work,” the policeman said, exasperated.

At midday in many neighborhoods, one noise was missing from the usual din: the sound of construction. Although day laborers often continue Baghdad’s building boom throughout the summer, this time it was just too hot. On the usually verdant Abu Nawas Street, one construction worker looked delirious from the heat as he slumped against a desiccated tree. There was no shade in sight.

With government power systems faltering across Iraq, sites ranging from state ministries to family homes rely on privately run backup generators and the army of operators who work in hot, dark trailers around the clock to keep them going.

But these pose their own risks. Powered by diesel fuel, they belch toxic fumes into the air, experts say, and customers are forced to pay exorbitant prices for the electricity to the unaccountable and often corrupt businessmen who own the machines.

The heat was oppressive inside his little office, and he said that the fumes seemed to be creating a sort of film across his eyes.

All around, the district was suffering. On his office wall, lists of families now in debt for their electricity supply were growing longer. Inside his home, his newborn grandson, Adam, was crying as he struggled to breathe.

“Every year we think it can’t get worse, but then the summer surprises us,” Abdul Khadim said. He looked exhausted.

In the summer months, Baghdad’s heat ebbs only when a dust storm rolls in, blanketing the city with particles of sand and earth loosened by the wind as Baghdad’s green belt dries up. This summer, thousands of people have been hospitalized with breathing problems as a result. There isn’t much the doctors can do.

“We just give them hydrocortisone and some time away from the storm,” said Saif Ali on a recent day, the beds in his emergency room still sandy from the feet of his patients. “It’s getting worse every year, though.”

Iraq’s combination of rising heat and water shortages caused by climate change, mismanagement and diminished upstream flows has caused unrest in the past. In the south, the conditions are forcing families from their farmlands and into cities, where tensions with longtime residents are growing amid dwindling resources.

In the city of Basra, where residents braced themselves Sunday for another night without power, pollution and toxic waste contaminated the entire city’s water supply in 2018, causing more than 100,000 people to be hospitalized with abdominal pain, vomiting, and diarrhea.

Large protests followed, but authorities crushed them with deadly force.

Across Iraq, small demonstrations decrying poor services in the face of extreme heat take place weekly. In Iraq’s marshlands — some of them now cracked beds of earth in place of the silvery pools where the Garden of Eden is said to have stood — a protester’s sign last month expressed the misery.

“If you ask me about the condition of my land, I will tell you,” it read. “Drought, poverty, forced migration, violence.”